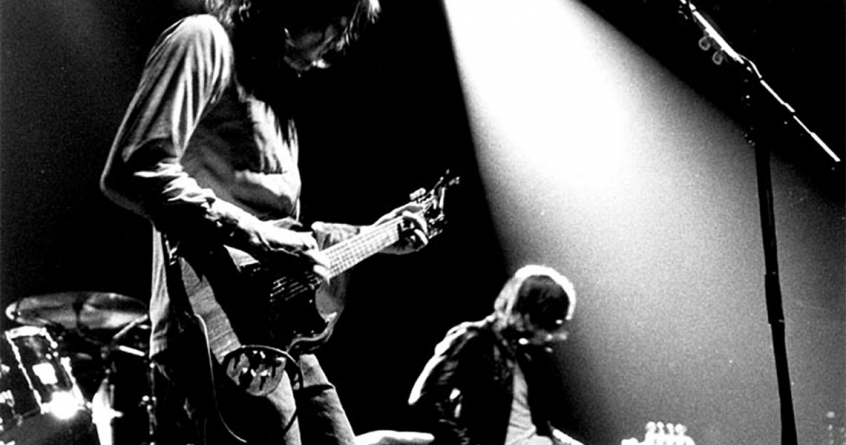 Dando himself remains a cryptic figure—it is unfair to a performer to try and interpret a singer’s affect, but it is sometimes hard to tell how much joy his own songs are bringing him.

The evening’s program could strike some as an exercise in ‘90s nostalgia—The Lemonheads, with none other than Tommy Stinson serving as an opener? But quite to the contrary, these alternative icons not only put on a great show, they also demonstrated that they still have plenty to offer, even in an era removed from that of their initial, considerable success.

It was fitting for Stinson to open, since the band with which he first became known, The Replacements, ruled college rock airwaves for much of the ‘80s, breaking up in 1991, while Evan Dando’s band started getting big right before then, capitalizing on growing buzz by releasing hit album It’s a Shame about Ray in 1992.

Apart from The Replacements, Stinson is known for lending his bass chops to Guns N’ Roses for nearly 20 years, as well as fronting bands Bash & Pop and Perfect. He took the stage by himself and played a mostly acoustic solo set, though he strapped on an electric for a couple closing songs as well. Stinson used his time to great effect, belting in his punk/Dylan-esque voice and passionately strumming his way through garage-y, heart-baring tunes. Stinson gave an especially inspired rendition of the title track from Bang & Pop’s debut Friday Night Is Killing Me and was a charming performer overall, one who clearly wanted to work to earn the crowd’s admiration rather than rest on his considerable laurels—at the merch table, there were T-shirts on sale that read, in all caps, “Who the f— is Tommy Stinson?”

After a brief break, The Lemonheads hit the stage with remarkable punctuality. Accompanied by Chris Brokaw on guitar, Farley Glavin on bass and Lee Falco on drums, Dando led the band through nearly thirty songs. The performance was unimpeachable, if occasionally somewhat workmanlike—there was little acknowledgment of the crowd and almost no time in between songs, giving the show an oddly rushed feel, even though it was plenty long (and Dando even came back for an encore). But the song selection was hard to argue with, pitting Lemonheads classics alongside several covers, both ones that Dando has been playing for years as well as ones newly released on this year’s Varshons 2.

The most effective covers were the country-tinged ones, including “Abandoned” by Lucinda Williams, “Speed of the Sound of Loneliness” by John Prine and “I Just Can’t Take It Anymore” by Gram Parsons (not to mention a surprise rendition of The Eagles’ “Take It Easy”). Dando’s voice has barely aged, but time has made his baritone timbre even richer, which suits these songs especially well. Dando also played covers he’s long been known for, the Misfits’ “Skulls” and “Frank Mills” from the Hair musical, as well as Chris Brokaw’s “My Idea,” which he covered on his solo album Baby I’m Bored. As for the originals, the classics were all there, and here, too, Dando’s seemingly ageless voice delivered all the pathos fans remember from the originals. And time hasn’t hurt his guitar playing, either—though Brokaw deftly handled most of the leads, Dando took a few scorching turns himself. Of course all the great singalongs were there—“It’s a Shame about Ray,” “Confetti,” “My Drug Buddy,” “Big Gay Heart,” “Down about It,” “Bit Part,” “Hannah & Gabi,” “The Outdoor Type” and others—just to remind you of what a hit-machine the guy is. But just as beloved as these gems were darker songs like “Rudderless,” “The Turnpike Down” and “Style,” as well as “Left for Dead” and “Stove,” both from 1990’s Lovey.

Dando himself remains a cryptic figure—it is unfair to a performer to try and interpret a singer’s affect, but it is sometimes hard to tell how much joy his own songs are bringing him. But looking around the audience, there is no doubt as to how much joy they still bring others.