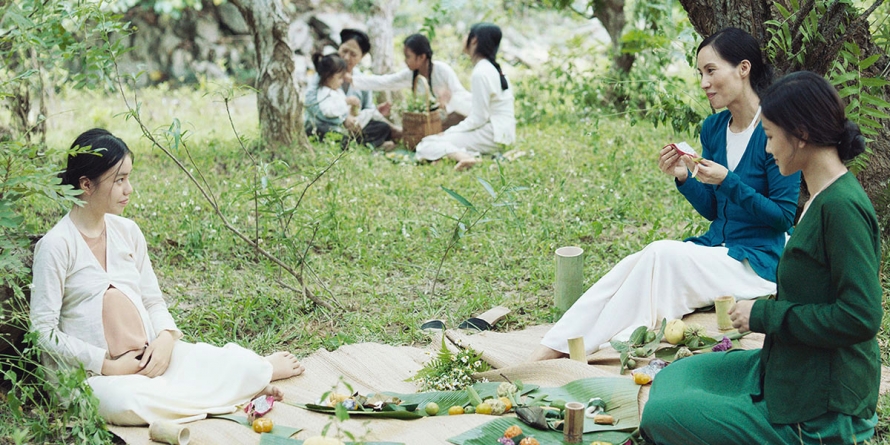 The Third Wife desires to luxuriate in its images rather than talk over them.

No words are spoken for long stretches of The Third Wife, the debut feature film from Ash Mayfair, and for good reason. Shot in rural Vietnam, the film desires to luxuriate in its images rather than talk over them. Its plot winds around a close-knit household shaped by rigidly enforced roles and predictable action, so minimal communication is required. And the titular character is not expected to say much — nor does anyone present particularly care if they hear from her at all. As the film unspools, however, Mayfair does find her voice, announcing herself along the way as a talent to watch.

That’s not to say May (Nguyen Phuong Tra My), the new 14-year-old third wife of wealthy landowner Hung (Long Le Vu), doesn’t have something to express, too. The customs of 19th century Vietnam just don’t allow a young girl to have much of a voice, especially when she must defer not only to her husband but also his two older wives. The Third Wife opens with May’s marriage to Hung, the consummation of that pact, and then plays out through the term of her pregnancy. Over those nine months, we come to learn, as May does, about the other women on the silk farm, and the social dynamics that exist between everyone, reinforced as if by steel.

The first two wives, Ha (Tran Nu Yen Khe) and Xuan (Mai Thu Huong), each have a role to play in maintaining this system. The former has a boy, Son (Nguyen Thanh Tam), who secures her place at the top of the house’s pecking order (below the men, of course). The latter has two girls, and as such is treated with some circumspection. May spends time with these girls, which provides a useful reminder as to just how young she really is. For Xuan though, there are appearances to maintain and additional reasons to be careful — and for the others to feel wary, not least of which is the reveal that she’s having an affair with Son. This could be a plot point as overheated as the tropical setting in which it takes place, but Mayfair keeps the tone at a stunned remove. We settle into May’s place, learning as she does about how this world works.

It starts, naturally, with gender divisions and then moves onto class. When May learns of a punishment doled out to two servants, we see how power is used in its most basic form. Likewise when Son is forced to marry a young girl he does not want, we understand who bears the burden of that rejection. The Third Wife’s austere beginning eventually peers into the souls of each of its characters — the leads, yes, but also the supporting characters, like Nhu Quynh Nguyen’s housekeeper. She too has a story of love and loss that informs May’s expanding world view. Only Hung, the husband, remains at a truly unknowable distance. In the process of the film we realize the nature surrounding May, as lush as it is, acts as an isolating force, the people within trapped by pain.

To her credit Mayfair never loses the thread of this narrative, as thin as it may appear at times. Shot with a careful eye by cinematographer Chananun Chotrungroj, The Third Wife paints both a vivid and exacting picture. Even after May and the rest of the film’s characters get a chance to express themselves, we can already intuit their intentions. In fact, the juxtaposition of the film’s images with the explosion of unrequited emotion May is both seeing around her and feeling within is what keeps the film moving. Mayfair’s use of natural visual touchstones — silkworms at work, the clash of white and red fabrics, the recurring presence of nightshade — may be obvious, but that doesn’t make them any less effective. And it helps that Nguyen Phuong Tra My’s debut performance as May relays both the absorption and transmission of these ideas, even without words.

The Third Wife is not all stately mounted images and longing glances, however. The sex in the film is startling by design, first appearing as ritual and then as something illicit and uncontrollable. May has no idea what it’s all about and experiences it in only the most protracted manner. Like any other young person, she longs to know more; how Mayfair balances the internal drive of that desire with her images suggests a level of talent beyond the short films she’s been making to this point. Like her lead character, she’s clearly hungry for more, too. And much like where her film leaves May, here’s hoping Mayfair gets more out of life than a silent supporting role.