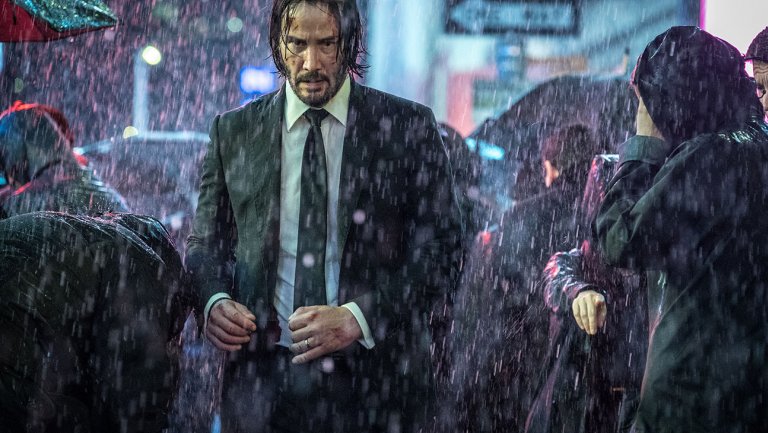 By now, audiences know what to expect from a John Wick film: stylized, extreme violence and a laconic Keanu Reeves performance as he battles multitudes of anonymous assailants. Rather than expand the world of the first two films, director Chad Stahelski gives us more of the same in John Wick: Chapter 3- Parabellum, another brutal, bloody installment in the successful franchise.

Picking up right on the heels of John Wick: Chapter 2, our hero is on the run after breaking a major covenant of the society of assassins to which he belongs. His pal Winston (Ian McShane) gives Wick an hour’s grace period to escape before Wick himself becomes a high-priced contract. Since the New York of this universe is filled with assassins waiting around like Uber drivers looking for their fares, Wick and his $14 million bounty are pretty damned attractive.

Cue the violence. In his attempt to escape Manhattan, Wick fights and dispatches countless assailants in highly choreographed scenes that see our hero breaking necks, stabbing eyeballs and snapping bones. He even kills a couple of guys using a horse (you’ll just have to see it). While all this sounds horrific, Reeves and Stahelski imbue these fights with a sense of humor, something that makes watching Wick break someone’s head with a book all the easier to stomach.

But how long can one watch one bone-crunching fight after another? The movie is well over two hours and non-stop fighting can get pretty monotonous. John Wick 3 tries to hold interest by moving Wick to Morocco and introducing a fierce Adjudicator (Asia Kate Dillon) who has come to New York City to deal with those who let Wick escape. We learn a little bit about Wick’s origin story but it’s really just a beat for the audience to catch its collective breath before the beatings begin again.

The backstory could have been fleshed out more, but Stahelski makes a wise choice not to delve into flashback. Instead, Wick visits a pair of women (Anjelica Houston and Halle Berry) who both owe him a favor for some past deed. Huston isn’t given much to do, but Berry, accompanied by two highly trained dogs, helps Wick take down a cadre of turbaned opponents in Casablanca. You also get to see the guy who plays Bronn on “Game of Thrones” (Jerome Flynn) get bitten in the balls by one of Berry’s dogs.

John Wick exists in a morally perilous space. While it is exhilarating to watch its tightly choreographed scenes and cheer as Keanu Reeves puts a sword through an assailant, it is also good to pause and recognize that we are, in fact, cheering as human beings are killed. As far as entertainment goes, John Wick is pretty base, but it’s very well-done. Of course, as Reeves gets older and doughier, a premise that already stretches its plausibility will be even further stretched out. Yet, the filmmakers must be feeling pretty confident that a box office windfall is on its way as John Wick 3 ends on yet another cliffhanger, telling us that more bloody mayhem is soon on its way.