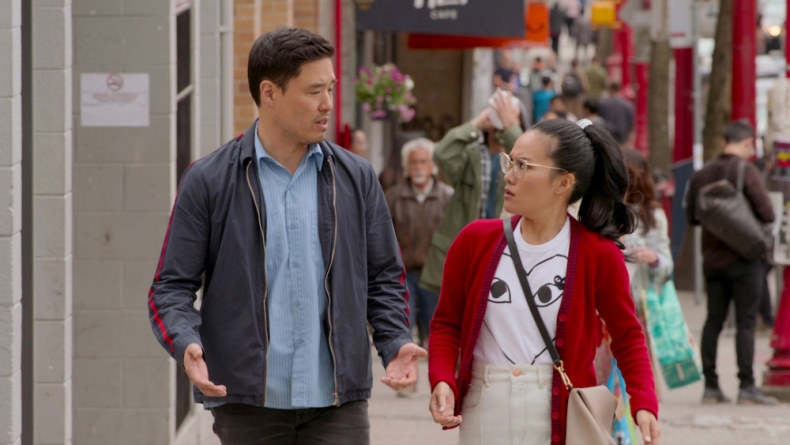 Always Be My Maybe showcases a killer cast of Asian-American performers.

Always Be My Maybe Dominic Griffin

When Crazy Rich Asians made bank at the box office, it was lauded for its all-Asian cast but was little more than a stunning production design masquerading as a functional movie experience. By contrast, Netflix’s latest straight-to-streaming rom-com Always Be My Maybe finds a way to be interesting while showcasing a killer cast of Asian-American performers.

Red-hot stand-up comic Ali Wong and Randall Park co-star as childhood friends Sasha and Marcus, who go from taking each other’s virginity to be completely estranged as adults. Sasha grows up to be a well-traveled celebrity chef while Marcus works for his dad’s moving company and has never left San Francisco. When Sasha’s perfect fiancé Brandon (Daniel Dae Kim) decides the couple should go on a break, she runs into Marcus back home and rekindles the will-they-or-won’t-they chemistry they’ve had since they were kids. But they have drifted so far apart that permanent coupling seems an impossibility. Or is it?

Born from a screenplay co-authored by its two leads and Please Stand By scribe Michael Golamco, Always Be My Maybe also doubles as the directorial debut for “Fresh Off The Boat” creator Nahnatchka Khan, whose television background helps balance the film’s efficient character building with its comedic set pieces. The movie transcends its sharp but lived-in rom-com premise by populating the narrative with likable characters portrayed by a cast of actors all clamoring for a breakout role. It succeeds on charm and heart more than original storytelling.

The film shines in little moments between characters and the occasional excursion that takes time away from the plot to luxuriate in this funny, little world. Some of the scenes where Sasha or Marcus spend time with their respective supporting casts aren’t chock to the brim with A-Plot building blocks, but they present an environment made easy to view by the humorous intimacy of its inhabitants. This is particularly true of an extended sequence in the second act where Keanu Reeves plays a ridiculous version of himself as one of Sasha’s post break-up suitors. Cameos by celebrities playing themselves can be lazy and grating, but here it feels so much of a piece with the film’s best bits that it strengthens the narrative rather than distracting from it.

But the film’s main strength is also its greatest weakness. Wong and Park have such enviable chemistry together that once it’s clear they’re going to get together and try to make it work, every plot contrivance that keeps them apart feels slight and overworked. Perhaps if the film were a little shorter it wouldn’t be so glaring, but the length of time we’re expected to believe they won’t reunite honestly gets a little tedious. Were this a television series, there would be room for other narrative threads to keep distance and circumstance between our two love birds, but in a movie, the script requires sudden turns from either protagonist that feel too heavy to hit home.

Obviously, “too much chemistry” between romantic leads is a pretty good problem to have, so it’s easy to forgive Always Be My Maybe. It’s just such a sweet and entertaining little picture that feels considerably more organic than some of the algorithmically designed Netflix fare we’re used to. If nothing else, it’s great to see a romantic comedy on the platform with this many talented performers and not a single Noah Centineo or “Riverdale” alum in sight.