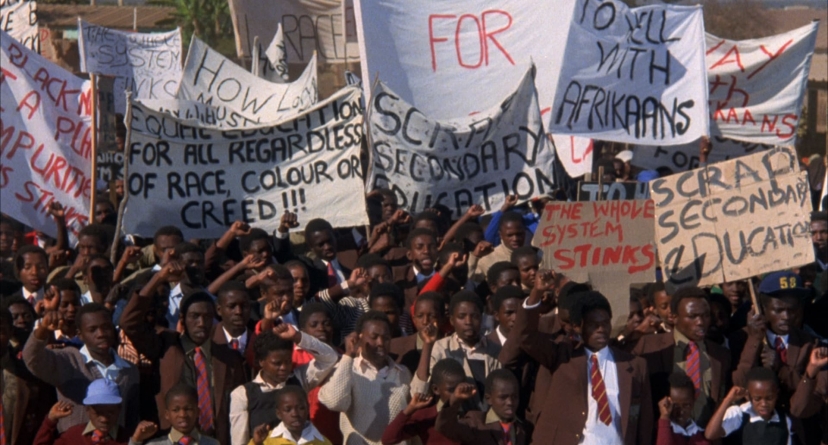 A Dry White Season is a reminder that art should be used to expose the evils that exist in this world.

Two boys wrestle over a ball on a vibrant, green lawn. One is white, the other black and together they laugh and smile as the opening credits roll over their horseplay. And although A Dry White Season debuted in 1989, the institutionalized racism and violence that it depicts was still relevant in a divided South Africa at the time. This idyllic moment, a vision of two boys of different races playing in harmony, is the last depiction of peace we will see.

Based on André Brink’s 1979 novel of the same name, A Dry White Season takes during the 1976 student protests in Soweto, a “township” outside of Johannesburg where black South Africans were forced to live away from their white counterparts. The protests were in response to a government mandate that children be instructed in Afrikaans and given sub-standard education. A Dry White Season begins with one such protest where the black boy from the prelude is detained and caned by the police. The boy’s father, Gordon (Winston Ntshona), brings the boy to his employer, Ben Du Toit (Donald Sutherland) – a former rugby star turned teacher – and asks him to do something. Ben, blind to the horrors of apartheid, claims that nothing can be done and immediately begins making excuses. Meanwhile, Ben’s own son Johan (Rowen Elmes), the white boy from the opening scene, looks on with horror.

A Dry White Season follows Ben’s journey as he slowly begins to recognize the horrors and injustice present in the South African state’s deeply racist policies. Directed by the Martinican filmmaker Euzhan Palcy, A Dry White Season may not have aged well in some places, especially Dave Grusin’s bombastic and cloying score, but it is also highly important for exposing the prejudices of apartheid to a wider, international audience. Beyond being the first film directed by a black woman to receive release from a Hollywood studio, Palcy also went undercover in South Africa to research before filming. If caught, she could have been arrested. 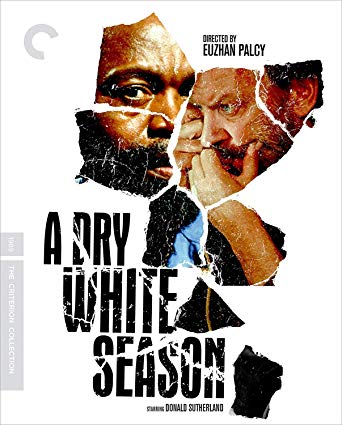 Like Brink himself, whose novel was banned by the South Africa government, Ben begins experience hostility from his family, friends and co-workers as he awakens to the plight of the black majority. Palcy films the dichotomy in stark contrast. Ben and his family live on a green, well-manicured estate with good food while the people in Soweto exist in absolute squalor, a place where children play in the burned-out hulls of automobiles. Soon, Gordon and his son are arrested and killed by the police. These abductions shake Ben out of his comfortable existence and as he realizes saying “there is nothing to be done” is not good enough, he begins a quest to expose the evils of apartheid.

Most of the other white characters in the film are drawn broadly in different degrees of racist behavior. Ben’s wife (Janet Suzman) wants to keep her head in the sand while his daughter, Suzette (Susannah Harker) actively helps the murderous police captain Stolz (Jürgen Prochow) in his quest to stop Ben from aiding Gordon’s friends. These characters mainly exist as foils for Ben’s slow awakening to just how institutionalized racism had blinded him and the abject horror he feels as he recognizes his place in perpetuating its tendrils.

Though a good deal of the film feels clunky at times, Marlon Brando shines as McKenzie, the lawyer Ben hires to help him bring Gordon’s murderers to justice. Justice and law, McKenzie laughs, are “simply not on speaking terms at all” in South Africa and urges Ben to drop the case because it’s a lost cause. Still, McKenzie decides to help and during one intensely frustrating courtroom scene, Ben learns just how deep South Africa’s white ruling class will go to maintain its hold on power.

More than anything else, Palcy makes clear the costs of opposing apartheid and just how far those who want to keep the system in place will go. A Dry White Season becomes a suspense film in its final act as Ben and Johan try to deliver secret affidavits to the press, a decision that not only costs Ben his job and family, but his life. Yet, A Dry White Season ends on a hopeful note, one that presages the release of Nelson Mandela from the prison and the collapse of apartheid. Though it hasn’t aged particularly well, A Dry White Season is a reminder that art should be used to expose the evils that exist in this world.