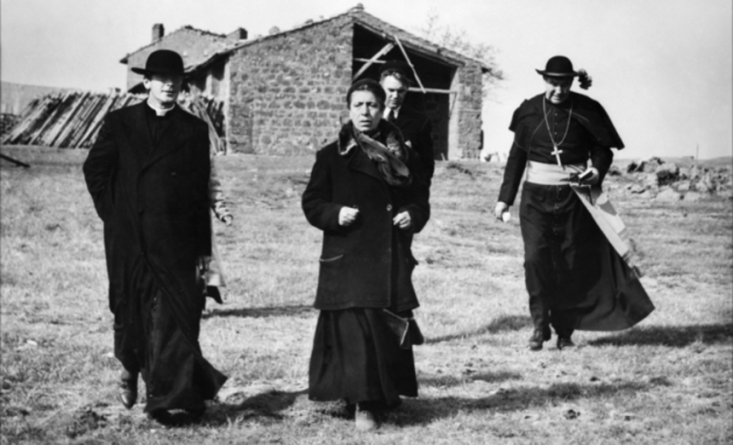 Every cinephile, not just the Fellini completists, should seek it out.

Before he made the sweeping, baroque epics about the dwindling boundary between reality and fantasy in the Rome of the ‘60s—think La Dolce Vita and 8 ½—Fellini first crafted the Loneliness Trilogy. These three films—La Strada, Il Bidone and Nights of Cabiria—are smaller, quieter and much more in the neo-realist vein. A thematic trilogy rather than one with character continuity from film to film, its arc emphasizes marginalized people, including street performers, prostitutes and low-level hoods scuffling merely to survive in the rapidly changing Italy of the ‘50s.

Of these three, La Strada and Nights of Cabiria are rightly heralded as masterpieces while the middle film, Il Bidone (The Swindle) is barely regarded at all and often skipped over by viewers. But while the film may not be as accomplished as the trilogy bookends, it is still a vivid work crafted by one of the grandest artists of the cinematic form. Every cinephile, not just the Fellini completists, should seek it out.

The straightforward plot follows a band of crooks who rampage through the countryside, taking advantage of the desperate and the gullible with a few repetitive swindles. Augusto (Broderick Crawford) is the erstwhile leader, a greying veteran in what all of the characters repeatedly call a young man’s game. Most of his swindles involve Augusto playing the role of the Monsignor, a representative of the Pope who uses his priestly regalia and the inherent trust that the average impoverished rural Italian has for the Church to con people out of money. For another swindle gang members pretend they are from the state housing authority and steal deposits from desperate villagers who have been on the agency’s waitlist for years hoping for an apartment.

From this set-up, two parallel plots emerge. The first is a character-driven tale focused on Augusto and his band of misfits. While their schemes are undeniably predatory and cruel, deepening the suffering of those already on the bottom of Italian society, the swindlers themselves were also left behind by the Marshall Plan-fueled economic growth of Italy in the ‘50s. This is best represented by Augusto, who has a teenage daughter he never sees, a rap sheet that has sent him to prison numerous times and a still-empty wallet. He is, in spite of his incessant schemes ripping off the poorest of the poor, a sympathetic figure. What else can someone like him do? This is a central question of each film in the Loneliness Trilogy, confronting the viewer with a lovable rogue of a character who deserves affection in spite of their behavior.

Secondly, Il Bidone can be read as an allegory of Italian society. The swindlers are only provided a space for their rip-off schemes because of the failure of traditional centers of authority to take care of the problems in Italy. The Church is a pillar of society and demands both respect and financial sponsorship, but Fellini forcefully interrogates this institution throughout the film. What good has the Church done lately? Remember, this is barely 10 years after the fall of Mussolini and the Church had offered the fascists full-throated support. Fellini turns his critical lens to the Italian State as well, which cannot house all of the men it is bringing to Rome to work in the factories. And the auteur does not forget the industrialists, either, those who run the factories and take home the bulk of the profits for their own amusement while their laborers lead lives of excessive vulnerability.

By the end of Il Bidone, it is evident that everyone in modern society is a swindler preying on those weaker, more ignorant and/or more desperate than they are. Is society itself just one big con? Fellini does not answer, but, perhaps not coincidentally, soon after Il Bidone he shifted his filmmaking into the big, the loud and the fantastical and away from the quiet everyday of the Loneliness Trilogy.