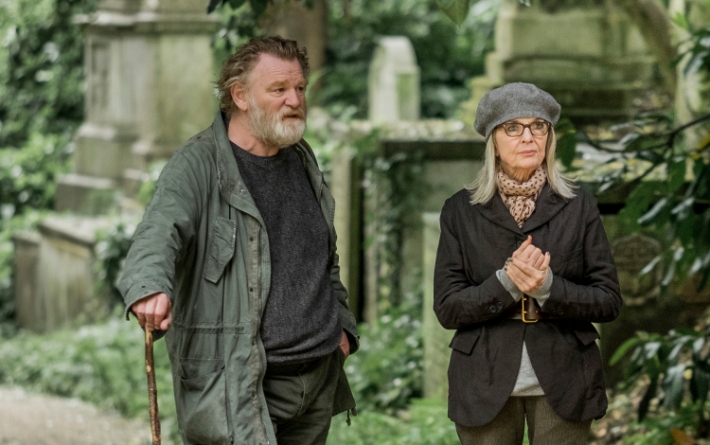 Hampstead leans so heavily into stereotype that it verges on parody.

Older viewers are a shamefully overlooked demographic at the cineplex, though it’s noteworthy that when films do get made for and about elderly people they tend to fall within narrow confines. Typically aimed at small arthouse theaters, such films know their audience by telling the same damn stories about well-off retirees facing the sudden prospect of insufficient end-of-life savings and the prospect that perhaps a life of upper-middle-class aspirationalism wasn’t worth it when facing one’s lonely twilight. Joel Hopkins’s Hampstead leans so heavily into this stereotype that it verges on parody. It centers on Emily Walters (Diane Keaton), a widow whose cheating husband left her with a dwindling supply of assets and a series of debts that threatens to get her expelled from the expensive flat she enjoys in a quaint, idyllic corner of London.

Emily is a repository of clichés. Surrounded by her fussy, upper-crust neighbors, a gaggle of housewives marshalled by the imperious Fiona (Lesley Manville, bringing all the acidic propriety she did to Phantom Thread), Emily can only remain calm in the face of their callously flippant attitude toward money and their desire to demolish nearby eyesores to increase the property value. Compared to the forced cheer of her neighbors, Emily is genuinely chipper, even down to pragmatic little solutions like placing a houseplant under a dripping leak in the ceiling. Emily comes across so carefree that her son, Philip (James Norton), speaks to her as if he were her parent and not the other way around, talking down to her about her financial instability and even warning her that he won’t be around forever to look after her. This is a paint-by-numbers role for Keaton, at once weary with age and perpetually childish, and she approaches the part with no commitment. Consider the scene in which Emily visits her husband’s grave and yells at the headstone for the pain he caused her. Keaton delivers her lines with such stagey affect that what is meant to be Emily’s raw moment of unvarnished pain looks embarrassingly practiced and stilted.

Emily’s budding late-life crisis finds an unexpected parallel in Donald (Brendan Gleeson), an Irish squatter who lives in one of the primary derelicts Emily’s neighbors want to bulldoze off the face of the Earth. Emily, facing the prospect of not being rich for the first time in her life, is captivated by this man, who bathes in ponds, gathers and grows his own food and lives in his hand-assembled, ugly cottage with total contentment. Viewing him almost as some anthropological marvel, Emily tails Donald until she finally makes his acquaintance, her chipper fascination contrasted with his gruff introversion. For a brief time, the two have a spark of opposing chemistry. The two stumble into agreeing to a date by the pond, for which Emily is so nervous that she shows up late, immediately irritating Donald. Fumbling for an excuse, Emily blithely mentions traffic, to which Donald growls “You live across the street” without even looking up at her. “Yeah,” she says with ironic cheer. “That’s how bad it was.”

This is the setup for a frothy, low-stakes romantic comedy that brings the snowbirds in for matinees, complete with an insufferably twee piano score that sounds like someone plunking away at chords in boredom. But this minor hint of charm quickly gives way to a forced drama about class lines that intermittently confronts the new couple with the disapproval of Emily’s social circle. Emily’s fears of being confronted by the likes of Fiona, or even Philip, over her relationship, are certainly nothing new in cinema, and have indeed been fertile grounds for agonizing melodrama when approached by masters like Douglas Sirk. Here, though, there’s no real indication of passion between the two leads, only modest interest. Likewise, Emily’s paranoia at being found out is never properly directed, which neuters a climax in which the truth comes out to Emily’s two-faced friends, whom Emily has never shown any interest in but must suddenly care about for narrative tidiness.

Such flat dramatics likewise infect the final act, which involves Donald having to defend his rights to live in his home when the government seeks to evict him from land he does not own. The courtroom drama is rendered with all the care and grace of a weekly legal procedural, with the complex fight for squatter’s rights and dignity compressed into a few zingers from the witness stand. There’s no tension in these scenes, no real political outrage, just a hurdle in the path of Donald’s crotchety but lovable obstinance. There is some promise, though, in the film’s coda which, not unlike The Graduate, lingers just long enough after its moment of triumph that you are left with the unsettling indication that no one thought about what happens after the initial high of getting what you want, and that long-term compatibility takes more than brief infatuation. But just as soon as the film introduces this compelling argument, it resolves the issue without effort, opting for a feel-good sugar rush over confronting some of the truer struggles of seeking a companion in one’s later years.