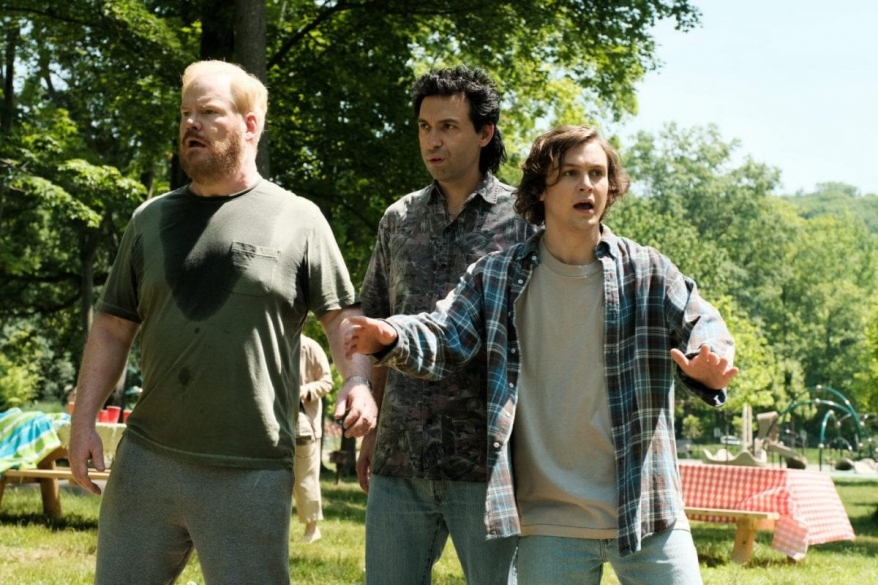 It threatens to sink under the weight of life-altering deception played for laughs.

Jim Gaffigan’s stand-up schtick often revolves around the stress of fatherhood—self-deprecating dad bod jokes and all—and Being Frank gives him the opportunity to double down on that approach. As the film’s eponymous character, he lives a double life, splitting time between two families who each think Frank’s protracted absences are because of the work he allegedly does in Japan, a country he’s never actually visited. This feature debut by director Miranda Bailey leans heavily on its 1992 time period, ostensibly to ramp up the flannel-clad, grunge-era angst of Frank’s teenage son Philip (Logan Miller), who discovers his duplicitous dad’s secret. But the era is primarily necessary because pulling off the double-family ruse essentially requires a pre-internet backdrop to seem at all plausible.

But even without the world-shrinking effect of social media and smartphones, the idea that the oafish Frank could maintain two families for nearly two decades is tough to swallow. The fact that the film plays Frank’s deceit for laughs helps some, but it never settles on a convincing tone. Stopping short of outright farce, Being Frank bumbles its attempts to inject some pathos into the situation, a contrivance that makes Frank seem almost sympathetic; he started two families because he had too big of a heart to break up with either of the two women he got pregnant around the same time. Instead, in one household he limps along in a rocky marriage with Laura (Anna Gunn) while applying stern parenting to Philip, who is desperate to leave town go to NYU against his father’s will. In the other household, Frank seems to have it all with Bonnie (Samantha Mathis) and his more stereotypically All-American children.

When Philip sneaks off on a spring break trip with a friend, he discovers his father’s double life and uses it to his advantage, blackmailing his pops into paying for tuition to NYU. Along the way the two go to great lengths together to keep the ugly secret, and oddly bond in the process, which comes off as both overly sentimental and wholly unlikely. The extent to which Frank involves his son in his deceit should feel much ickier than it’s depicted here, in a film content to cut to awkward montages set to poorly chosen pop songs. Bailey’s film employs a clunky soundtrack that never fits the tone, and the sudden insertion of blaring songs remains jarring throughout, further confusing just what kind of film this is meant to be.

Being Frank threatens to sink under the weight of life-altering deception played for laughs, but treads water on the father-son chemistry between Gaffigan and Miller. Frank and Logan’s relationship, though preposterously strengthened by maintaining a treacherous façade together, remains dynamic and compelling enough throughout to keep the viewer’s interest in this otherwise forgettable comedic caper. But Being Frank can’t strike an effective balance between silliness and family drama, mirroring its dual patriarch with a tendency to want to have its cake and eat it too.