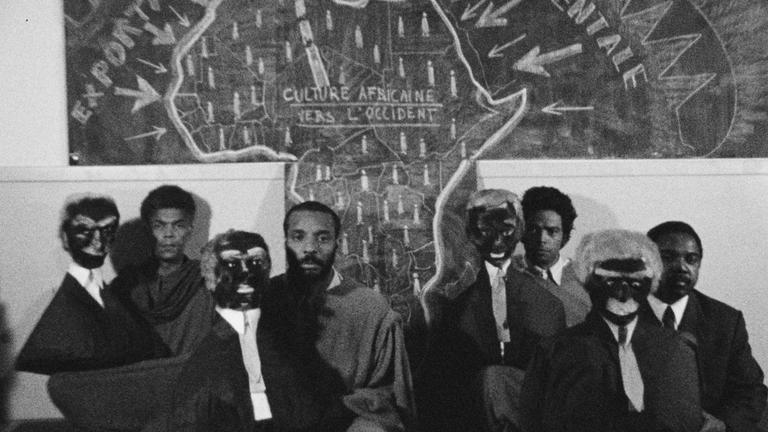 This timeless stylistic statement is a pressing reminder of the dehumanizing consequences of ignorance and intolerance.

Among the many cultural upheavals of the 1960s was the wave of independence that swept across Africa, where one country after another was nominally released from colonial control. With this transition came an accompanying efflorescence in the arts, as new nations sought to establish distinct individual voices, flexing their fresh creative freedom. Cinema wasn’t exactly at the forefront of this movement, lagging behind poetry, written fiction and other visual forms, but the latter part of the decade witnessed a steady uptick in African autership, with work that often dealt specifically with the after-effects of these political developments.

Ousmane Semebène’s Black Girl, from 1966, was a seminal example, spotlighting the struggles of a young woman in both France and her native Senegal, establishing a continuum between old world and new. Following soon after, Mauritanian director Med Hondo’s Soleil O covers similar thematic territory in a totally different style, further advancing this premise while making use of the spasmodic, radical rhythms of the French New Wave.

For Hondo, who shot the film piecemeal over a period of four years, scraping together whatever funds he could manage, breaking chains meant breaking convention. As with many early New Wave features, the lack of budget becomes a launching pad for an iconoclastic approach to filmmaking, allowing the seams to show as a gesture of performative authenticity. Here, that emphasis is further accentuated by an ironic focus on primitivism, twisting the elementary folk art conventions expected by a condescending French public into a distorted art brut object, defined by an obstreperous stylistic platform shot through with caustic wit. Taking a continental view that surveys the breadth of Francophone Africa, Hondo takes on the influence of French culture abroad, presented as a hegemonic force that cannot be adequately opposed by native movements. Since authentic forms of African expression can’t counter the influence of this Gallic monolith, the existing paradigm must be obliterated, an effort the film embarks upon with wild, ingenious gusto.

This bold approach is wryly represented through the trials of a decidedly unaggressive protagonist, a new immigrant (Robert Liensol, playing a nameless character known only as “The Visitor”) ready to begin work as a bookkeeper. Exiting a passenger ship bound for what he believes is the motherland, he views himself as a man of fully French extraction, ready to cash in on the future promised him in the colonial academies of his youth. Instead he experiences one humbling after another, a spiraling succession of closed doors that removes the possibility of professional work and leaves him grappling with the callous disregard of even supposedly sympathetic individuals. These lackluster allies are less interested in providing actual access to power than reducing him to a tokenized symbol, while rote classes in cultural immersion attempt to strip he and his fellow pupils of anything but an empty drive toward conformity.

The Visitor resists indoctrination and submission, as Liensol’s fierce performance charts the path from wide-eyed naif to furious radical, a development handled through a range of different dramatic styles. The film opens with an extended abstract sequence, in which a group of black men (“The Visitor” among them) are passed through an obscure church ritual and then launched straight into battle with one another, their clutched crosses inverting into swords. Prefiguring Melvin van Peebles’ The Story of a Three-Day Pass, another Paris-set tale of racial awakening released the following year, Soleil O employs an episodic narrative to great effect, the purposeful fracturing of the plot echoing the protagonist’s increasingly shattered state of mind.

The final result is a chilling primal scream that represents less an instance of catharsis than one of hopeless, impotent rage. The Visitor breaks out of the prisons that have come to hold him, but finds there’s nothing here resembling escape; roaming an endless forest landscape, he’s reduced to the stereotype of brute animalism the white Parisians had expected from in the first place. Looking back from today’s fraught political climate, with refugees and migrants again pushed to the fringes of society and then blamed for their position on the periphery, a film like Soleil O serves as both a timeless stylistic statement and a pressing reminder of the dehumanizing consequences of ignorance and intolerance.