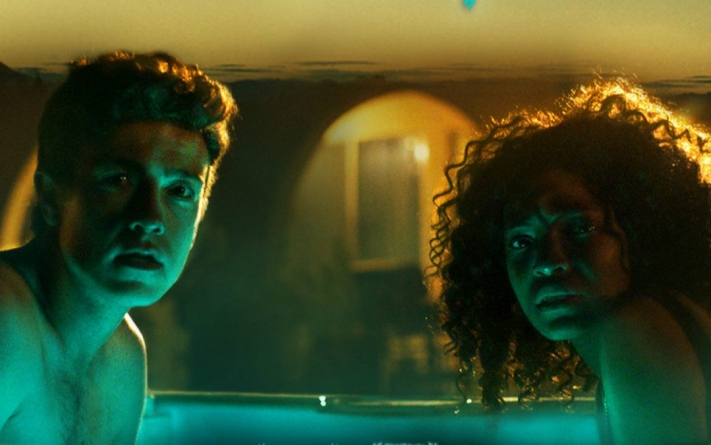 Callahan has conjured up a creepy little horror flick with her new film Head Count.

Director Elle Callahan has conjured up a creepy little horror flick with her new film Head Count. Callahan, who has worked behind the scenes in a number of departments on a number of films, brings impeccable visual and aural style to Head Count, and as a result the film looks and sounds much more expensive than it actually is. For the most part, Callahan maximizes her limited resources, particularly by demonstrating a keen eye for landscapes and tracking shots.

Head Count sets the scene immediately. Evan (Isaac Jay) drops his friends off for break-time fun and drives himself to his brother’s trailer near Joshua Tree National Park. Evan’s brother, Peyton (Cooper Rowe), is New Age-y in a straight-edge way, spurning drugs and alcohol in favor of meditation and yoga. When Evan spots the striking Zoe (Ashleigh Morghan) smoking pot in the park with a group of her friends, he can’t resist joining in. Zoe is the “ninth wheel” on vacation with eight coupled off companions. Evan quickly falls in with this new crowd, and Peyton begrudgingly sends him along with them to their rented house, where Evan is soon drinking tequila shots and exchanging fireside ghost stories with Zoe and her pals. When Evan’s turn as storyteller comes around, he picks a random story, titled “Hisji, Hisji, Hisji, Hisji, Hisji,” which accidentally summons a demon to the party.

Evan first spots this malevolent being while he’s getting to know Zoe in the hot tub outside the rental house, but the prospect of amoré distracts him and Zoe from thinking too much about it. But things continue to get weirder and soon Head Count begins to effectively channel John Carpenter’s The Thing. Because the Hisji can adopt the appearance of any person at the house, and with 10 twentysomethings to choose from, it is nearly impossible for the friends to keep track.

While the script (written by Michael Nader and based on a story by Callahan) is underdeveloped, Callahan’s technical background is evident in the quality of the visuals and the sound. Like Carpenter, she effectively mixes thumping electronic music and slow-moving tracking shots to get the blood racing. Scares are executed with flair but also patience, and one particular scene involving a drinking game takes its time but absolutely realizes the horrific potential of doppelgangers.

The limits of the film’s small budget show in the climax, where what should be a culmination of all of the tension built up throughout Head Count is instead confusing and visually flat. The real horror is almost always cut away from, and Callahan instead chooses to hover outside the door or window as violence unfolds. In addition, the film fails to capitalize on the potential of its central beastie, both visually and in terms of the actual mythology behind it, and as a result it’s hard to care too much about what happens.

Overall, Head Count is solid, particularly in its robust middle section. That section of the film is delightfully suspenseful and even provides a few genuine scares. While the beginning lags and the end disappoints, Head Count’s saving grace is the potential of its monster, which is under-explained and oddly described as the result of an Internet search. And there are so many characters that it’s hard to care about any of them. Still the Hisji is nearly strong enough to carry the whole film, and it mostly does.