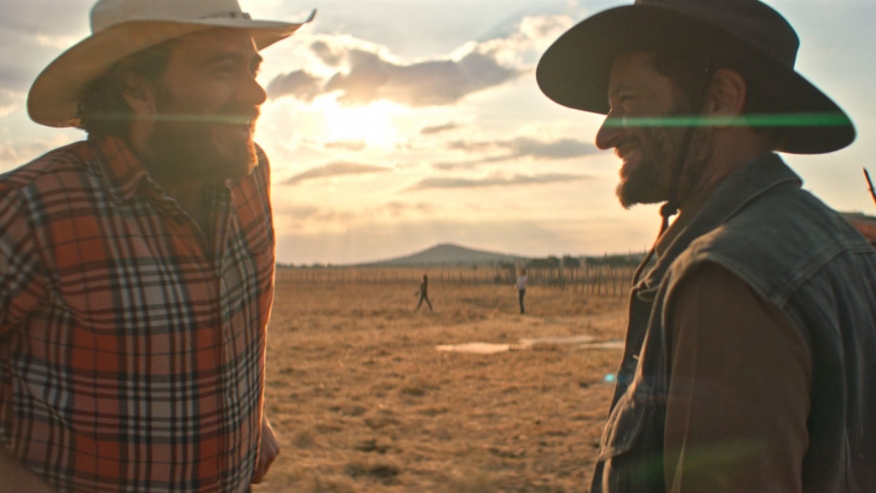 Another long-form examination of unchecked ego that stands as a grandiose expression of same.

In the years since 2003’s Japón, each new feature from Carlos Reygadas has further confirmed his status as a slick, bombastic arthouse showman, whose flagrant boundary-pushing is backed up by both real technical skill and a predilection for personal introspection. This mixture of flash, pretension and substance reached its fullest flower yet in 2013’s Post Tenebras Lux, a flamboyant journey into the depths of the male psyche. After a six-year hiatus, the Mexican director returns with Our Time, another long-form examination of unchecked ego that itself stands as a grandiose expression of such. To what extent some measure of circular commentary is intended is impossible to determine, a fact which adds a fair amount of frisson to the proceedings, while also contributing to a looming threat of creative wheel-spinning.

Employing his real family (with the addition of an invented teenage son), Reygadas examines a variety of romantic and societal boundaries from a satirical perspective, while leaving room for real emotion and empathy to creep in around the edges of this acerbic statement. The primary focus is the dissolution of the marriage of Esther (Natalia López, Reygadas’ wife) and Juan (the director himself), which crumbles after a few key lines are crossed. How much of the drama here has an autobiographical origin is of course open to interpretation, a conceit the director toys with throughout, engaging in the usual arty theatrics—poised here somewhere between irony and self-critique—while aggressively pushing the characterization of Juan as a twisted, vainglorious reflection of his own public image.

The key to the story is that the couple’s marriage is an open one, an understanding dependent on Juan being apprised of every detail of Esther’s extracurricular activities. After she briefly takes up with an American acquaintance who’s done some work on the family’s ranch, Juan becomes consumed by jealousy, the overblown mania of his reaction serving to drown out the fact that she has indeed violated the rules of their arrangement, if only by not cluing him in quickly enough.

The issue of culpability, however, seems less significant than Juan’s unhinged response, which seems to come as a side-effect of a failed crusade to stage-manage every aspect of his lush, well-appointed life on the ranch, a personal retreat from his main career as an award-winning poet. It’s a conflict pushed deep into winking paradox by a director attempting a similar coup in the artistic realm, utilizing his own family as props to service his vision. Doing so, of course, requires putting his spouse in some awkward situations, a demand which Reygadas further mirrors via visual metaphor, portraying Juan as a wretched Peeping Tom, creeping outside of windows during dalliances, desperate for a look.

Before it descends into this tangle of metatextual mayhem, Our Time starts off in opposing territory with an airy, majestic opening, a move that’s by now become de rigueur for the director. Rambling around the ranch as a lively party proceeds, the film predicts future conflicts while mapping out a variety of social hierarchies, moving from the reckless play of the very young to the idle flirtations of teenagers, before finally settling in on the adults. Utilizing wide lensing and an even wider scope—soaring mountains in the distance affixing each scenario’s naturalist splendor—this long intro hardly predicts the stifling, Bergman-esque chamber drama that will follow. Yet like the similarly staged (albeit indoor-shot) extended family scenes in Post Tenebras Lux, it serves as a pointed antithesis to action occurring elsewhere, while also offering tantalizing hints of other stories snipped off before they even begin.

Meanwhile, the couple’s sprawling hacienda provides ample opportunity for further outdoor interludes and bits of torrid symbolism, much of it based around the bulls that Juan is raising for the slaughter, destined to be shipped off to die in the bullfighting arena. The use of these beasts as emblems is one of many allegorical overtures that comes off as snidely on the nose, as if conceived in mockery of the director’s own personal tics, and the longstanding arthouse affection for loud, obvious metaphors. Sometimes this pushes too far, as in the sight of one of the animals viciously obliterating a mule—what appears to be an unstaged instance of egregious animal cruelty—another habitual signature that feels repeated and expanded purely to stir up controversy. Such combative ugliness seems presented to stand in sharp contrast to what are otherwise the film’s most naturally stunning scenes, steeped in the sumptuous landscape of Tlaxcala’s verdant plains.

Crude moments like these seem designed to exacerbate the kind of criticism likely to be leveled at a film of this stripe, walking such a fine line between puerile, navel-gazing narcissism and a satirical assessment of the same tendency. Yet the interplay between indoors and out is also the film’s most crucial element, key to its caustic dissection of faux-rustic urban professionals playing at cowboys. Advancing a timeless narrative about dissatisfaction and deception, it finds its most biting relevance at the place where eternal ennui meets the limits of contemporary sexual liberation. Such critique is not limited to the admittedly incisive portrait of masculine egomania, since the larger criticism extends to all manners of privileged individuals fussing endlessly over their own frivolous pleasures, oblivious to the wonders of the world surrounding them. One significant scene finds Esther immersed in texts from a lover while a magnificent symphony performance plays out around her, the music absorbing and enfolding her as she remains blithely consumed by her phone.

Another key sequence at a friend’s deathbed vigil further confirms that while Juan may be hung up over semantic infringements of his relationship’s rules, his unraveling really stems from more universal, unspoken fears. Moments like these reconfigure the implication of earlier events, flipping an exchange in which Juan refuses to shell out money to sponsor an employee from a signifier of cheapness to one of a social better annoyed at a reminder that his ranch buddies are bound to him by financial exigencies, not pure friendship. It’s reversals like this that make Our Time more than just a self-serious saga of cuckoldry and control, elevating its depiction of performative masculinity into something rich, textured and humane, even when it’s drawing blood. Questions of status, position and personal gratification may trouble and diminish our lives, but sometimes such quibbling concerns, and the illusion of control they bring with them, are the only thing keeping us afloat.