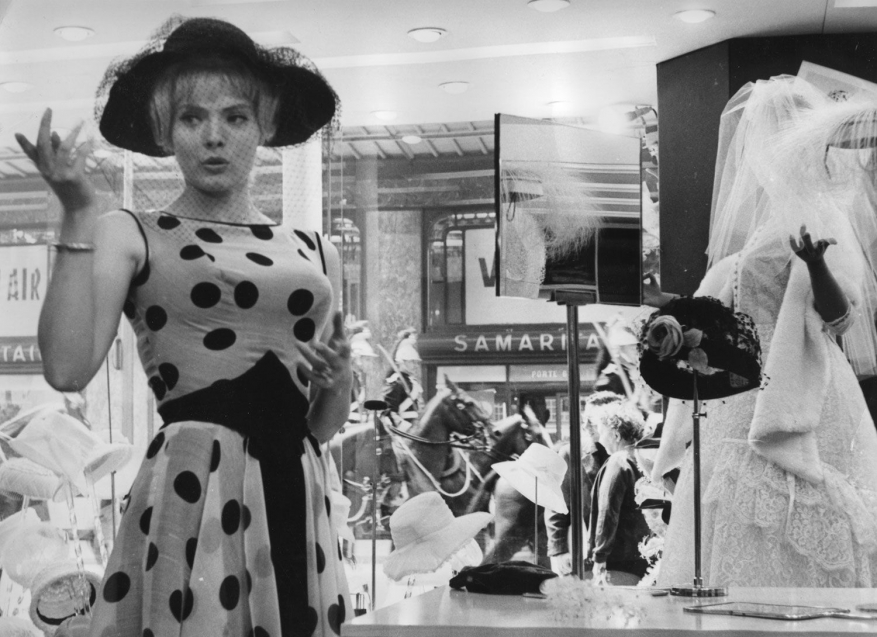 Varda’s vast talents were on display from the very beginning of her long and storied career.

Agnès Varda’s 1961 classic Cléo from 5 to 7 is a beguiling mixture of cinematic polish and experimentation. Despite its contained brilliance – its New Wave realism, its crisp runtime, its masterful use of Parisian streets as sets, its close following of Corinne Marchand’s expressive face – it is also quite playful, and finds Varda toying with tricky camera movements, double and triple thematic meanings, the occasional burst of melodrama and even some tarot. It’s a feast for the eyes and the intellect and shows that Varda’s vast talents were on display from the very beginning of her long and storied career.

The movie follows Cléo (Marchand), a French pop singer who is waiting to learn the results of a biopsy, which is being tested for cancer. The procedure has left the beautiful but objectified Cléo reeling. Not only is she waiting for news of her death, but the test in itself has put her mortality directly in front of her. She must consider not just her death but also her aging body, her potential loss of physical appeal.

Varda isn’t subtle about showing Cléo’s forced self-reflection or her fraying psyche. Mirrors appear frequently, and split screen and other nifty techniques are used to show the vortex of feeling in which Cléo finds herself. She is ignored or unsatisfied by friends and lovers and sees frequent signs of death, age and isolation as she wanders the streets.

Yet this isn’t simply the story of a woman facing possible death. Because life and hope also burst forth all around Cléo. The Parisian streets are filled with people living their lives. Snippets of conversation are overheard, as are busy scenes of people going on about their day. It is Cléo who will not, and just as we sympathize with her plight, we also see her vanity. She is a beautiful hypochondriac and despite her flailing towards others, she sees little but herself.

A brief, intense interlude with a soldier on leave from the war in Algeria (Antoine Bourseiller) hammers this point home further. Yes, Cléo has every right to be stressed about her impending test results, as well as her potential loss of beauty (which, for her, will surely result in a loss of income), but all around her people are being sent off to die at war.

That playfulness comes not only from Varda’s frequent experimental camera techniques, but also from the plot as well. The film actually begins with Cléo having her tarot cards read by a fortune teller, which hints at the theme of fate but also at Cléo’s superstitious nature. Cléo’s role as a pop star isn’t just for show – there is music, and good music at that (Michel Legrand wrote the score). And many of Varda’s famous friends (including Jean-Luc Godard) have cameos.

While Cléo is narcissistic, Varda plays with that as well. Cléo is subject to not only the opinions and economics of men, but there is also the strong suggestion that Cléo’s life has become a self-fulfilling prophecy. Men have used her for her looks for so long that she has become self-obsessed as a matter of survival, not vanity. Varda’s complex feminism is ahead of its time in 1961, and she will continue to touch on these themes in later work. But through the expressive, Marilyn Monroe-esque Marchand, the point is particularly provocative.

Cléo from 5 to 7 has clearly inspired many filmmakers over the years, with everyone from Richard Linklater to the Dardenne brothers drawing direct inspiration from it. Yet even after all these years, it still looks and feels like a singular entity. Cléo is an enchanting and infuriating lead, and over the course of the film nothing and everything happens to her. Her Paris is centered on her alone, yet will continue on in her absence. She is a mirror for us in the audience, and we, like her, will lose ourselves in her for a couple of hours while the world spins around us.