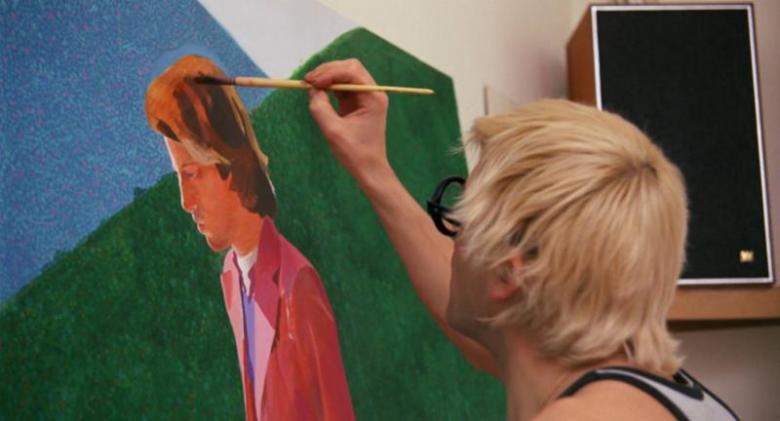 A Bigger Splash is one of the most keenly insightful films ever made about how the dissolution of an artist/muse relationship can torment an artist with his own work.

Originally released in 1974, Jack Hazan’s A Bigger Splash is a documentary of staged truths, a curious blend of deeply intimate footage and flagrantly staged tableaux that creates a dissonant portrait of Pop Art luminary David Hockney. “Portrait,” though, may be the wrong word; as a study of an artist’s method, the film offers little insight into Hockney’s process. There are scenes of the painter at work, but little in the way of study or explanation of his process. In fact, the film opens with a montage not of the artist’s work but of evidence to his social notoriety. A barrage of photographs and text from newspaper stories and glossy magazine profiles that attest to the publicity storm that Hockney’s work ignited. Hockney himself is often a peripheral figure in the wider circle of contemporary artists and bohemians to whom he belongs, from fashion designer Ossie Clark to painter Patrick Procktor, all of whom are enjoying their own level of success as breakout stars. Yet in Hockney’s social and romantic interactions, Hazan begins to tacitly illustrate some of the deeper meaning of the painter’s vibrant work.

Much of A Bigger Splash contends with the emotional fallout of Hockney’s breakup with partner and muse Peter Schlesinger. Having posed for many of Hockney’s paintings, Schlesinger was an integral aspect in the artist’s breakthrough, the human presence that added as much warmth to Hockney’s vivid, bright paintings of sun-baked Californian luxury. The two are seen together at the start of the film as Hockney works on what would become his Portrait of an Artist (Pool with Two Figures), Schlesinger silently moving through various poses as Hockney takes reference photographs. To watch them in this early scene is to have no indication that they are, or were, a couple. Both work with each other tacitly, with Schlesinger mechanically moving around as Hockney silently takes photos. Whatever these two had, it is gone, and though this is the only time in the film in which the pair share on-screen space, they are clearly already rent apart.

The film, lacking any interviews with participants, does not approach Hockney’s feelings about the relationship directly, but the incessant mentions of the breakup by concerned friends attest to its significance. More importantly, the impact of the separation can be seen in the morose attitude that Hockney begins to display. Working listlessly in his studio, Hockney struggles to complete Portrait of an Artist; at one point a friend even points out that he has been working on the painting for six months and visibly takes no pleasure from the work. Other sketches and nearly complete works are scrapped, including one painting that Hockney meticulously shreds with a knife.

Hockney’s tacit fixation on Schlesinger gives added meaning to the initially jarring scenes of staged conversation and activity that fill the film. Hazan particularly stages a number of scenes of Schlesinger engaging in erotic activities with other men. In one scene, Schlesinger and another men are filmed having sex, the camera poring over their entwined body as they kiss and grind. It’s a shockingly intimate moment but obviously not an act captured naturally, and initially it is not clear why Hazan would have arranged such a scene. Things become clearer, though, near the end of the film when Schlesinger is shown swimming with numerous nude men in the sort of pastel-colored SoCal pool that Hockney painted. In an instant, the film’s dramatizations are clarified as Hazan narrativizing Hockney’s inner state, projecting the artist’s darkest imagination of what his former lover might be doing without him.

Plenty of films have deconstructed the power balance of artist/muse relationships, but A Bigger Splash is one of the most keenly insightful films ever made about how the dissolution of such a relationship can torment an artist with his own work. Hazan may be imagining Hockney’s inner turmoil, but there is a visceral sense of uncomfortable truth to the scene of Schlesinger in the pool, at once making explicit the coded gay content of Hockney’s work and then disrupting the placid contentment of his paintings with roiling tension of dejection. It’s a bold method to capture the simmering self-loathing that accompanies a breakup, and even if A Bigger Splash were entirely fictional it would go down as one of the greatest and most emotionally true examinations of a relationship’s end. The film even inadvertently bolsters its notion of art’s mocking snapshot of domestic bliss in Hockney’s 1971 painting of his fashion designer friends Ossie Clark and Celia Birtwell of them posed in marital comfort, only for the pair to divorce in 1974. We all carry torches for past loves, but not many of us leave those imprints visible to the world on paintings that others will pay millions of dollars to own because they speak to them in a way entirely different than to the artist. Here, Hockney’s work cannot be separated from the man who not only posed in them but inspired the joy that made them possible, and when Hockney must swallow his pride to ask Schlesinger to pose one last time so that he can finally be rid of his final portrait of now-terminated happiness, it feels like one of the most blistering statements on the curse of artistic inspiration ever captured on film.