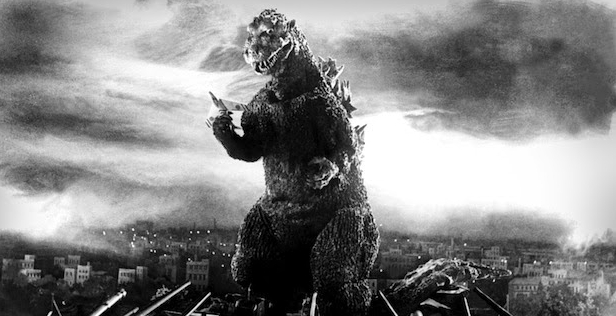 Honda’s film weighs the value of creating one superweapon to defeat another.

The sedateness of much of Ishiro Honda’s original Godzilla stands in marked contrast to the boisterous franchise that sprung forth from its immense success. Like a few of its successors, the film is rooted in the human attempt to fathom its iconic monster, who here is the powerful, abhorrent embodiment of the nuclear era come to further harass and decimate the only victims of the atom bomb to date. Yet despite this titanic symbolism, Godzilla’s attack on Japan is structured as a slow escalation, beginning with the disappearance of boats and gradually coming to threaten all of Tokyo. In the space the film leaves along this journey, it does not simply revel in panic but instead ruminates. Godzilla itself only appears sporadically, but is just as keenly felt in its absence when humans are left to make sense of the monster.

The early stretches of the film are perfectly paced to hint at something unfathomable and malicious, all without seeing the source of increasing chaos that begins to affect seaside Japanese villages. It’s a shrewd approach (artistically and financially), communicating a monster through its aftermath rather than its presence, a method that would become commonplace in such films (such as the monster movies of Steven Spielberg). Science and superstition alike struggle to rationalize what is happening around Odo Island, and only when the island’s village is destroyed in a storm by a force recognized to be a living thing does the government resolve to explain the phenomenon. Yet even amid this mounting terror, Honda complicates the mood when he shifts attention to Kyohei Yamanae (Takashi Shimura), a paleontologist summoned when large, dinosaur-like footprints are found at the thrashed village. Eventually, the scientist concludes that Godzilla is an ancient being, ripped free of whatever hidden realm it formerly wandered by hydrogen bomb testing in the Pacific

Plenty of Japanese films made in the aftermath of World War II wrestled with the psychological trauma of the war and the atomic bomb attacks, but Godzilla remains the definitive attempt to grapple with such an overwhelming existential crisis. Though this version of Godzilla is unleashed, not outright created, by the Bomb, the creature is nonetheless representative of ongoing nuclear terror in Japan. Adding to the sense of chaos and fear as Godzilla encroaches upon ever-larger cities is the underlying brutality that the monster is not a symbol of revenge upon Japan but of further victimization brought about by the reckless activities of the very powers who so heinously obliterated Japanese life in 1945. That shoots the film through with a political subtext as rich as its existential dread, particularly when Yamanae presents his findings to a government panel. Upon learning that the monster was freed by nuclear tests, officials immediately move to censor this information lest it strain the still fresh, still lopsided diplomatic ties with the occupying United States. The furor the cover-up unleashes in some of the witnesses rips the lid off of simmering tensions left over from wartime defeat, with one woman furiously lambasting the assembled council for preemptively bowing to the PR concerns of foreign aggressors over domestic safety. It’s a potent reminder that Japan’s nationalism and patriotism was not swept away by Hiroshima and Nagasaki, and that a quest for peace does not preclude lingering resentments of treatment at the hands of the Allies.

That political tension is then folded into a broader sense of moral rumination as the characters mull over how to deal with Godzilla. Yamanae, especially, becomes the film’s ethical focal point. Displaying a scientist’s curiosity and a humanist’s care, he approaches the case with a studiousness that re-frames Godzilla as a thesis to be studied. The more the government seeks to destroy the monster, the more forcefully Yamanae argues for preserving it, though embedded even within his respect for life is a hint that his fascination with Godzilla’s resistance to nuclear power contains within it a desire to harness it to protect his homeland from future harm.

The desire to shelter Japan not merely from the monster but future human attack informs the film’s potent final act, in which scientist Serizawa (Akihiko Hirata) devises an “oxygen destroyer” superweapon that can suffocate Godzilla but attempts to prevent the weapon’s use lest it launch a new arms race to acquire the technology. Serizawa is visibly traumatized by his own invention, regarding it less as the product of his intelligence and labor than a cursed object hung about his neck like an albatross. Only Godzilla’s unstoppable rampage through Tokyo, which horrifically alludes to imagery of the US firebombing of the city, convinces him to use it, but even then he resolves to detonate the device manually, ensuring that its secrets go with him to his grave. For all of the devastation and grotesquerie of the Godzilla franchise, the sight of Serizawa plodding to his doom in a diving suit, his calm march to death set against the climactic ruin of Tokyo, is perhaps the most horrific moment in the entire series. In responding to the massive threat of Godzilla, Honda’s film weighs the value of creating one superweapon to defeat another.