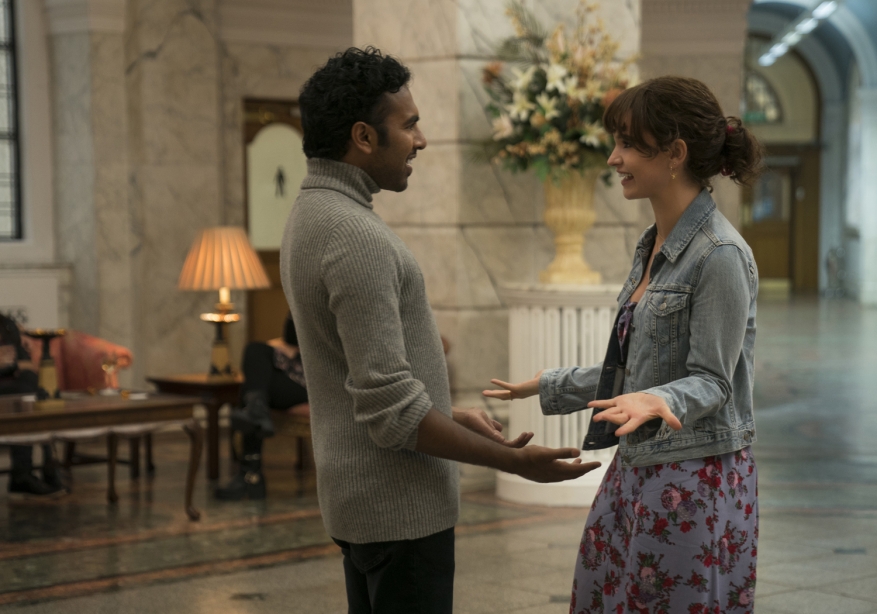 It’s delightful, sure, but how much of that is because of the soundtrack?

If it was discovered that millions of cows were milked in order to produce the immeasurable amount of cheese in Danny Boyle’s Yesterday, it would surprise no one. The film’s bottled-up, concentrated nostalgia is tailor-made for audiences looking to be swept away by a story that heavily relies on its musical influence in order to succeed. It would be easy to deem it as pandering if it weren’t so damn charming. But, alas, this is a guilty pleasure that makes the most of its silly premise by constantly delivering upon its thematic possibilities.

Here’s the spiel: Jack Malik (Himesh Patel) is a struggling musician who is about to give up on his aspirations. One night, while riding home on his bike, there is a massive, worldwide blackout and Jack is hit by a bus. He wakes up in the hospital, and as the days progress he begins to realize that he is the only person who remembers The Beatles. He uses this to his advantage by recollecting the music and lyrics of what was once the world’s most iconic band, quickly becoming a superstar himself in a matter of months.

While a bit tacky, the idea is undeniably clever in its appeal, with screenwriter Richard Curtis bringing great charisma to the film’s characters and plot developments. Boyle brings his usual dynamism to the film’s direction, interweaving interesting visual sequences, humorous set pieces and vibrantly edited musical numbers within his efforts; a studio recording session of “I Wanna Hold Your Hand” is a highlight here, as are the crafty moments where Jack desperately tries to remember the lyrics to the admittedly complicated “Eleanor Rigby.”

Of course, the film would be nothing without The Beatles, a band whose music drives the film throughout its duration with toe-tapping momentum. Jack Malik is certainly no John, Paul, George or Ringo, but in showcasing a character who is both passionate about the music he’s recreating and hesitant about the success he is receiving because of it, Patel delivers a sturdy and satisfying performance.

The MVP, however, is Lily James as Ellie, Jack’s longtime friend and romantic possibility. Sure, the movie shoehorns James into a “will-they-won’t-they” scenario that’s redundant as hell, but even the most banal of romantic subplots can be turned by the chemistry of the actors involved. Patel delivers successfully in this regard, but James is so emotive in her acting that it’s impossible to resist. Her smile melts the entire theater and her tears can break an audience’s collective heart.

What’s most interesting about Yesterday is what it has to say; about the music of The Beatles and how meaningful it is to the world, about the perils of success and sensationalism in today’s modern music industry, and about finding your place in the universe. While some of it is undeniably heavy-handed, much of the film’s philosophy has a tender touch.

If anything, you’ll leave the film with a newly established sense of appreciation for a band that many of us have loved since childhood. But that’s also the most unfortunate thing about this entertaining yet occasionally empty film; without The Beatles, the film is nothing. It’s delightful, sure, but how much of that is because of the soundtrack? A lot, in fact, which makes this a complicated film to fully recommend. But if you enjoy a good night of karaoke out with friends, there are worst ways to spend your time than Yesterday. But don’t expect to remember it when you’re 64.