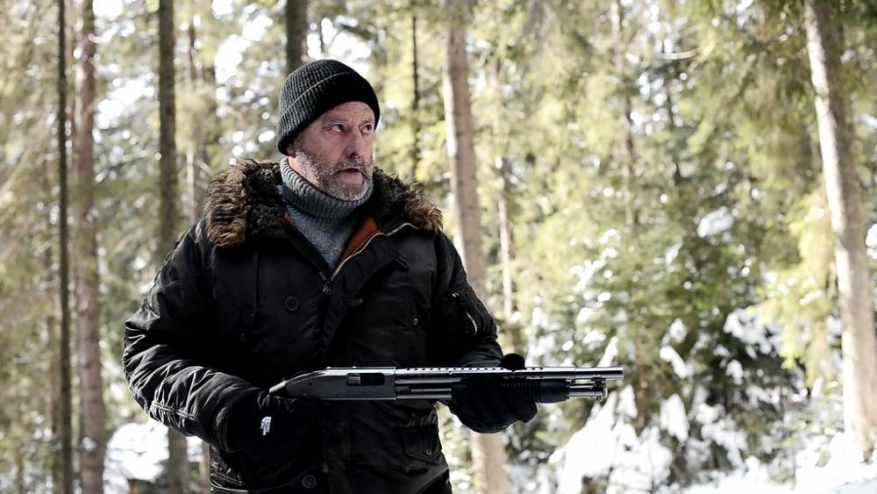 Hitman movies have coasted on fumes for years, the limited applicability of the existential reveries of those who make a living by taking life having long ago been exhausted and the bleakly comic aspects of the trade having similarly been sapped of wit. Still they come, however, each more leaden than the last. You’d be hard-pressed to come up with a more moribund entry into the genre than Frédéric Petitjean’s Cold Blood, a clumsy repository of thematic and comedic tropes that makes its ostensibly trim 90 minutes feel like an entire season of TV. At one point, a detective even exclaims “I love ‘True Detective’” when teased for his belief that killers follow a “manual” of behavior, and Petitjean seems to agree, preferring a stultifying approach to neo-noir.

The film begins with a woman, Melody (Sarah Lind), brutally crashing her snowmobile in the Rockies, the camera poring over the grisly sight of a tree branch spearing her leg. We then follow her arduous crawling until she comes across a man, Henry (Jean Reno), at a remote cabin. He approaches the fading woman but instead of tending to her, looks around, paranoid. At last, Henry decides to take her in, at which point we are treated to that most thunderously dull of clichés, a black screen announcing a flashback leading up to this point. The literal nature of this, showing both Henry’s last assignment and Melody preparing for her trip, immediately grounds the film to a halt. Watching Henry’s careful preparation for a kill, stalking his target at a gym and murdering him in a bizarre sauna that pulses rich shades of red and blue, or the sight of Melody packing tampons for her trip, saddles the film’s ostensible elemental simplicity with too much detail. There’s nothing communicated in seeing these characters’ background that isn’t said in Melody’s determined crawl or Henry’s cagey glances around his home upon seeing her.

This irreconcilable imbalance between static existential drama and wordiness results in numerous scenes that strive for verbose humor but leave pockets of lethal dead air between bad punchlines. This is especially pronounced in scenes involving Kappa (Joe Anderson), the detective who takes on the case of solving Henry’s last assignment with a curious fixation that clashes horribly with Anderson’s laconic, smarmy portrayal. Kappa, intended to be the witty, cynical veteran, instead engages in stilted exchanges with everyone. Consider an early scene in which Kappa sits in a diner and attempts a repartee with a bored waitress, his clever barbs restricted to asking what the daily special is or making a weary face when the server tells him his meal was nuked in a microwave. Everything about Kappa is baffling, from his characterization to his zeal for justice in the murder of a criminally connected industrialist to the perfunctory scenes of his pounding the pavement, including a bit in which he interrogates a suspect in an office that looks like it’s located in an underground bunker.

With no actual drama to propel the film, Cold Blood settles into a rhythm of displaying Henry’s alternating kindness and disdain for his unwanted guest, helping her to convalesce while also sparing no thought for the considerable pain he causes in treating her wounds. There’s no real tension to their dynamic, even when an obvious twist complicates their relationship and reignites Henry’s paranoia. The two-hander structure of the film, and obviously Reno’s involvement, is meant to recall Leon: The Professional, but the caustic, terse wit that Reno displayed in that film is entirely absent in his insular, minimalistic performance here. Reno is all hard stares and matter-of-fact summaries of Melody’s health, and Henry’s total blankness as a character does not lend itself to meaningful ennui so much as a total lack of motivation that robs the limp climax of relevance.

Any of this might have been alleviated by a strong aesthetic élan, but Petitjean opts for dour greyscale and lifeless camera movements. Every shot looks like it was taken by a second-unit director doing pick-ups; to call the images “functional” would be a generous assessment that they impart information visually. Apart from the odd tic (Petitjean finds so many excuses to awkwardly insert an American flag into the frame that you’d think he had apprenticed under Michael Bay), this is a wholly anonymous feature, a film so threadbare that its tropes barely fall into place to qualify as a complete narrative as it stumbles toward its predictable, dull conclusion.