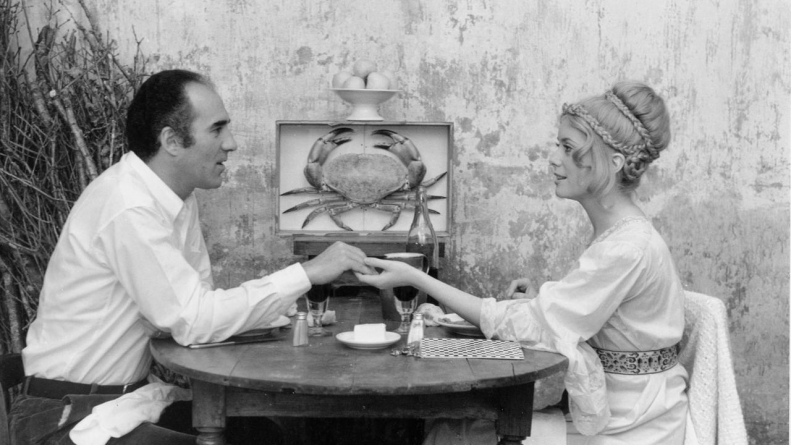 An airy, intellectual take on science fiction, particularly given its ruminations on how even well-intentioned men silence women.

Agnès Varda’s fourth film, 1966’s The Creatures, is one of her most ambitious but least lauded. Starring acclaimed French thespians Catherine Deneuve and Michel Piccoli as fictional island dwellers Mylène and Edgar Piccoli, The Creatures is an airy, intellectual take on science fiction, and despite the shift in genre it still thematically fits very well into Varda’s oeuvre, particularly given its ruminations how even the most well-intentioned men silence and oppress women.

Filmed and set upon the French island of Noirmoutier, The Creatures opens with author Edgar driving his wife Mylène along twisty roads en route to the island. While the two exchange sweet nothings, Mylène complains that Edgar is driving too fast, but he shares that the speed sparks his creativity. He crashes into a tree, leaving him with a minor facial injury and rendering Mylène mute. The film then jumps forward and finds Edgar writing feverishly (occasionally taking jaunts into town to find inspiration) while the now-pregnant Mylène remains camped out in their lovely but isolated home.

From there, Varda uses both the Piccolis relationship and the island-community setting to explore concepts of free will and inspiration. Varda’s camera meanders and twists in trademark Left Bank style, and she devotes much of her time to small subplots, minor diversions and slice-of-life snippets. Her New Wave bona fides are bolstered here, because even as she explores a mind-control plot (complete with a mad scientist and the nefarious exchange of silver discs) she spends most of her time—and ours —with Edgar’s titular “creatures” (his name for the locals who inspire his characters).

In addition to being a master of filmmaking, Varda is a keen student of film, and The Creatures is filled with winks, nods and more forceful allusions to other films. The most obvious and consequential of these ties this film to Ingmar Bergman’s The Seventh Seal. Specifically, Varda references The Seventh Seal’s famous chess scene by including a fateful chess-like dice game between Edgar and the manipulative tower-dwelling genius Ducasse (Lucien Bodard). The winner, of course, controls Mylène’s fate, though she (literally) gets no say in the matter.

While in Ducasse’s tower, Edgar is able to learn even more about the local “creatures” by looking at Ducasse’s all-seeing, evil-genius television screens. In observing the townsfolk from this point of view, Edgar sees unsavory truths about them, things his imaginings didn’t include as he observed them face-to-face. While there are other science fiction elements to The Creatures, this is the most intriguing. What can cameras really show us about people? And how much knowing is too much knowing? There are no simple answers to this, particularly as one of the people that Edgar spots on Ducasse’s screens is an older man who is revealed to be an abuser of young local women.

The Creatures was hard to find for a number of years, which is odd considering Varda’s fame as well as the international fame of Piccoli and particularly Deneuve. Opportunities are rare for female directors even today, particularly opportunities in genres other than domestic drama and romance. Erasure and limited availability of films like The Creatures has contributed to creating this culture where filmmaking achievement by women is undervalued and ignored, so it is heartening to see more of Varda’s films, particularly those that push boundaries, finding more availability. Even outside its legacy, however, The Creatures is a beguiling swirl of genres, a piece that both is representative of Varda and also shows her successfully exploring themes outside of her usual sandbox.