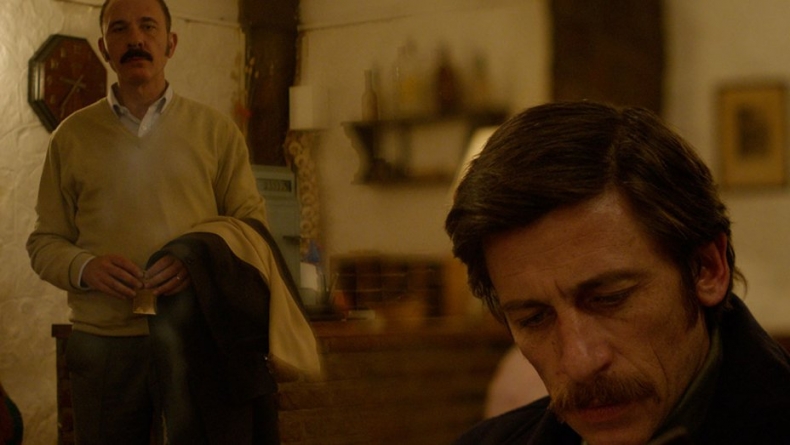 This is a movie about how societies fall made timely in the age of Trump and the international epidemic of right wing extremism.

Your opinion of writer/director Benjamin Naishtat’s new film Rojo will depend on your feelings about heavy-handed symbolism. Set in Argentina in the mid-‘70s, the film deals with the human and societal facets of encroaching corruption. Naishtat illustrates his theme in an arresting sequence where main character Claudio (Dario Grandinetti), a well-known attorney in a small town, stands on a beach during a solar eclipse. Claudio has taken his family on an impromptu vacation on the shore to get away from work and the God-fearing private investigator, Sinclair (Alfredo Castro), who is looking into one of the two crimes the lawyer has recently committed. The eclipse slowly bleeds onto the scene, bathing Claudio and the other Argentinians staring heavenward in red. A military dictatorship is taking over the country, so Claudio is not the only man infected by the evil transforming the country. When the eclipse ends and normal color has returned to the screen, a new reality has been established.

Personally, I found this the high point of a film that never quite hits all the targets it’s aiming at. Part Poe and part Billy Wilder, the film begins with Claudio waiting for his wife, Susana (Andrea Frigerio), while being harassed by a stranger who will come to be known as the Hippie (Diego Cremonesi). The lawyer peacefully surrenders his table, but slowly picks apart the stranger’s personality in a speech worthy of a closing argument. When the man erupts several of the male patrons usher him out. Claudio is respected in the town, and they all come to his aid.

Susana finally arrives and the incident becomes an afterthought until the Hippie throws rocks at Claudio’s car, shattering windows and injuring his wife. The lawyer pursues his assailant onto the dark streets. A gun is pulled, but the Hippie attempts to put a bullet in his own head instead of Claudio’s. He fails to aim properly and cause an immediate death, and Claudio puts the bleeding, choking man in his car before driving off to find a surgeon. When the local clinic can’t help, the lawyer drops his wife off at home and leaves, saying he is driving two hours to the next town that has a surgeon that can help. Instead, he leaves the Hippie to die in the desert, his still-breathing body affecting Claudio like a tell-tale heart.

Why Claudio chose this course of action is never made plain, but making things plain is never really Naishtat’s concern. The lawyer could have alerted the authorities at the beginning, but opted to handle the matter on his own. In the end, he discards the Hippie like an animal he hit with his car as if Claudio suddenly realized how inconvenienced he was by the whole situation. Compassion placed the dying man inside his car, but apathy led Claudio to the desert, not some quiet revenge. The Hippie gets company as the film goes on and human life becomes cheap currency in matters of real estate, the heart and government.

The film is shot to appear like faded Polaroids found in an abandoned shoebox. Naishtat further attempts to create an artifact of the era by employing the quick zooms and jerky camera movements of a less elegant time in filmmaking. In Grandinetti, the director has his Gene Hackman, an everyman whose stillness conveys all the weariness of the world. Claudio is a fascinating character because you keep waiting for him to crack under the strain of his actions, but he goes back to his life without the requisite introspection. He is even seen advising a worker that is suing for a severance package about his rights. Many subplots emerge from the dealings across Claudio’s desk, some lingering longer than need be, others like the shady real estate deal existing in the service of plot. Naishtat kindly throws in a little humor in a bit involving American cowboys and the government’s failure to supply them with visas.

But corruption is the mainstay and a force that robs the narrative of any heroes. When Sinclair arrives with his detective’s acumen there’s a sense that law and order will be restored, but this isn’t Edward G. Robinson in Double Indemnity. Sinclair is a former cop made famous for solving mysteries on television after he left the force who spouts Bible verses and righteousness, but it is all meaningless. He will let a criminal slide as long as they come from the right class and station. God will be the final judge, which is too common a sentiment among the upper middle-class these days. Ultimately, this is a movie about how societies fall made timely in the age of Trump and the international epidemic of right wing extremism.