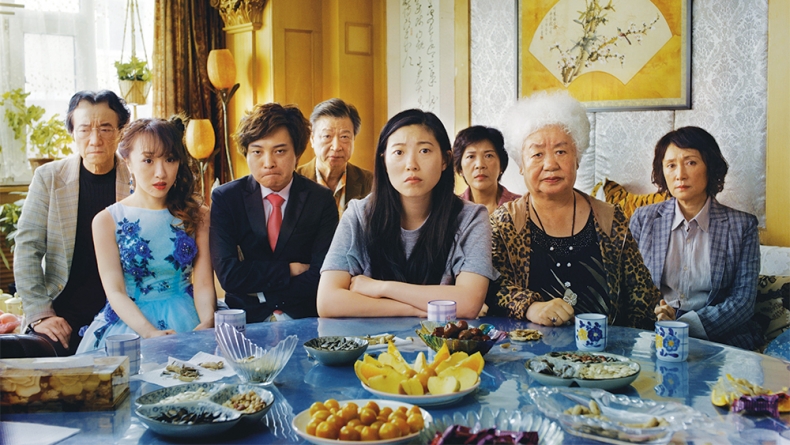 In tackling the complexity of grief and the nature of reconciling with death, The Farewell finds fertile ground for both tragedy and comedy.

In tackling the complexity of grief and the nature of reconciling with death, The Farewell finds fertile ground for both tragedy and comedy. It is at once a somber rumination on family dynamics and a crowd-pleasing comedy of errors.

The film possesses a premise that, on paper, sounds like it could be from a more sentimental and melodramatic affair. It stars comedy rapper turned actress Awkwafina as Billi, a Chinese-American twentysomething at odds with the rest of her family for her slackerish, struggling lifestyle and broad emotionality. When Billi finds out her grandmother Nai Nai (Zhao Shuzhen) has been given a terminal cancer diagnosis and the rest of the family intends to keep it a secret from her, she puts an international flight on her credit card to attend the fake wedding everyone is orchestrating as a cover for visiting their soon to be passed relative.

The farcical flair of the film’s premise is presented in such a believably muted fashion because, while an inherently cinematic starting point for a story, it’s not entirely fictional. Writer/director Lulu Wang based the script on her real experiences, previously detailed in an episode of “This American Life.” As a result, she’s able to craft a film that straddles the balancing act between docudrama and indie comedy, portraying a unique cultural perspective with a style that leaves room open for easy mainstream crossover.

That explains why it was such a festival sensation, sure, but this isn’t another one of those semi-funny sad flicks everyone rants and raves about in the winter only for a spring limited release to bring a tepid response before it’s forgotten forever. Wang is a truly promising storyteller, laying out a story that has room to breathe without a bloated running time, with characters that are well-drawn without needing scene after scene of meandering banter to establish identity. It’s as visually arresting, with its muted color palette and restrained camera work, as one might expect from an indie darling, but there’s a real charm to the dialogue, delivered in a mixture of English and Mandarin, that more Sundance fare could learn from. There’s a real efficiency to the way characters interact that allows the movie to move at such a deliberate and somewhat maudlin pace without ever feeling too glacial.

The atmosphere is such that the film’s themes, present in every single scene as the family members each have to navigate upholding this deception in their own ways, are repeated and returned to from so many angles. First, as reassuring comedy, then again as bone-chilling reality that’s difficult to shake until the comedic pendulum swings back around and the process renews. It’s thrilling to watch an ensemble so interlinked as to keep this perpetual feelings-machine running so smoothly.

But as fantastic as the entire cast is in bringing these fictional approximations of Wang’s family to life, the two standouts are Awkwafina and Shuzhen. This is the first and perhaps only time Awkwafina has had a role where she felt like an actual person and not a frustrating assemblage of quirks and shtick. Here, divorced of her usually irritating persona, she displays a screen presence and quality that makes her feel like an absolute revelation, capturing the dual-cultured identity Billi possesses in a way that never feels like it’s broadly pantomiming a specific experience for white audiences. It’s going to be a real shame if/when she returns to doing her typical song and dance in lesser films than this one.

And Shuzhen! What a complete and utter delight this woman is. In playing Nai Nai, it feels like she is playing the sweetest, most endearing elements of every grandmother ever, like some sort of mythical ur-grandma all other grandmas were unknowingly forged from. She’s the emotional centerpiece of this brilliant little picture and the only performance of 2019 this reviewer is willing to enact physical violence in defending, should the need ever arise come awards season.