January 27, 2021
Home Features Revisit: In the Heat of the Night

The set-up seems familiar. A wealthy man is found murdered in a Southern town, his head bashed in and money stolen. The police scramble to find the killer. They immediately bring in an African-American traveler, ready to declare him guilty without due process. Luckily, In the Heat of the Night (1967) quickly dispenses with the tired trope of a black character who is wrongly accused of a crime he didn’t commit and must spend the rest of the movie trying to clear his name. That’s because the man the cops have detained is a police officer himself.

Directed by Norman Jewison and shot by legendary cinematographer Haskell Wexler, In the Heat of the Night stars Sidney Poitier, during the apex of his popularity, as the Philadelphia cop who reluctantly teams up with the racist police of Sparta, Mississippi to solve the murder. Beating out The Graduate, Bonnie and Clyde and Poitier’s own Guess Who’s Coming to Dinner to win the 1968 Best Picture Oscar, the film spawned two sequels and a television series, acclaimed for its clear-eyed look at the discriminatory practices of white Southerners as the civil rights movement gained traction in the United States. 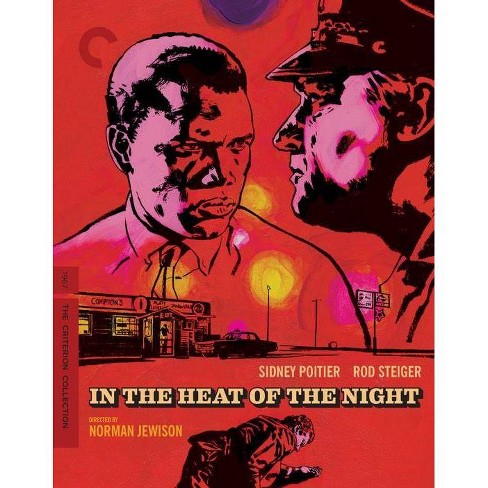 One of the joys of the film is watching Poitier’s virtuous and talented homicide detective Virgil Tibbs simultaneously square off against and assist Sparta police chief Gillespie (Rod Steiger, who took home the Best Actor Oscar). The chief is every bit as inept and bigoted as Tibbs is professional and open-minded, more than a one-dimensional racist. Steiger digs deep as the chief eventually learns to respect his impromptu partner.

However, Tibbs’ position doesn’t carry too much weight in Sparta. As he gets closer to finding the murderer, his life is on the line. Unlike the other African-American characters in the film, many who work on a cotton plantation or live in squalor, Tibbs is better-spoken and better-educated than anyone in Sparta. The townspeople not only resent Tibbs for the color of his skin but for the fact that he is simply better than they are: better-dressed, better-mannered and better-off than the sweaty denizens of the small town. Yet Tibbs just wants to go back home and is forced by his chief to stick around and help out.

The tendrils of racism that dig deep here, sadly, aren’t too different than what we are still reading about in the news more than half a century later. In a day and age where the President of the United States openly disparages people of color on Twitter, In the Heat of the Night is timelier than ever. In his effort to solve the murder, the victim being a Northerner brought to town to build a factory that would employ both white and black men, Tibbs must fight off chain-wielding assailants and keep himself from behind bars as some of the racist cops would rather see him put away than show them up.

Many of the film’s themes hew close to reality. Poitier initially balked when Jewison wanted to shoot in Mississippi, refusing to film anything south of the Mason-Dixon line after the Ku Klux Klan pursued and shot at him and Harry Belafonte as they tried to smuggle money to proponents of integration in the South. They made the movie in Illinois instead except for one important scene where Tibbs visits a cotton plantation during his investigation. Though the movie is set in the 1960s, scenes of men picking cotton under the hot sun and of house servants in white suits feels like something out of the 19th century. But it is here where Jewison and Poitier deliver the film’s most important moment. While questioning the plantation owner, Eric Endicott (Larry Gates), the white man objects to Tibbs’ presence and smacks him across the face. Without a pause, Tibbs returns the backhand, startling even Gillespie. With that blow, In the Heat of the Night disrupts the Hollywood portrayal of African-American men and women as “bucks” and “mammies.” It’s a smack to the face that some very fine people still deserve, and need, today.