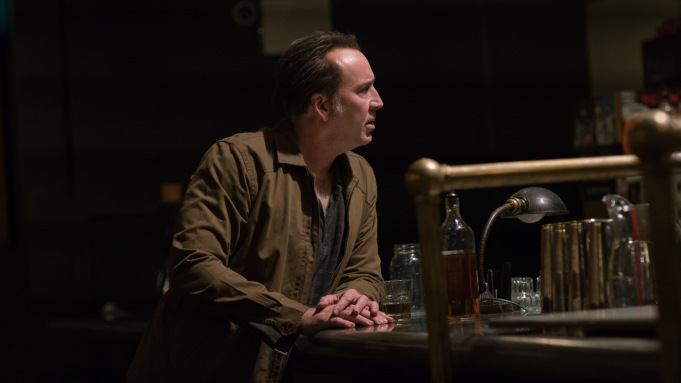 A Score to Settle suggests something that’s just within reach, but isn’t there yet.

A Score to Settle Pat Padua

With a hot-off-the-presses New York Times Magazine profile and a few genuinely strong recent performances, the stakes are higher for Nicolas Cage than they’ve been in years. From the pyramid-shaped tomb he keeps in New Orleans to the back taxes that make it seem like he’s so hard up for money he’ll take anything for a paycheck, Cage had for a long time seemed like an defeated ham, reliable for a few moments of meme-ready bug-eyes in an otherwise forgettable VOD product like Rage or The Humanity Bureau. His beyond over-the-top performance in last year’s delirious, near-visionary Mandy raised expectations for the prolific actor, and if it weren’t for that higher bar, the revenge thriller A Score to Settle would seem like a better-than-average Cage showcase. But now that we’ve been reminded what a fully-cooked Cage vehicle can look like, his latest is something of a disappointment.

That disappointment isn’t Cage’s fault. He plays Frankie, an old-school thug released from a 19-year stint in prison for his part in a brutal murder—committed by a whole gang of men, though he was the only one to serve time for it. He’s got a big payoff waiting for him, but naturally, you expect him to go after the other members of his old gang. Here’s the thing: In prison, he was diagnosed with an incurable condition that causes fatal insomnia; if he doesn’t take his medication, he won’t be able to fall asleep, and he’ll die.

It sounds like a perfect role for everybody’s favorite mad actor, and he turns in that late-career rarity, a full performance. Instead of the intermittent conviction that appears when he lets all of his inner demons fly out, he simmers and bides his time and modulates his intensity so he seems committed through the whole film. He shares tender moments with the now grown son (Noah Le Gros) who meets him when he gets out of prison, and while he does play the prodigal dad, he doesn’t settle for conventional emotion. When they use dad’s newly unearthed fortune for an extravagant shopping spree, Cage shifts between regret at not being there for his son and a wild-eyed glee at being able to pay cash for expensive sports cars, bling and a hooker with a heart of gold (Karolina Wydra).

Screenwriter John Newman, a veteran of the TV series “Get Shorty” and the long-running “Days of Our Lives,” gives Cage enough to chew on—and a third act twist that’s all kinds of soap-opera ridiculous. Such material could have blossomed under a quirkier, more brutal director like fellow Nicolas, Winding Refn. But director Shawn Ku (Beautiful Boy), even though he leads Cage through a reasonably coherent character arc, mostly settles for bland locations and cinematography that lack the much-needed texture to launch this into B-movie glory.

The film isn’t exactly a failure; Cage makes it watchable throughout, and he saves his best freakout for a final act outburst over the appropriateness of the word “beef.” Still, you wish that Cage could get together with a low-budget auteur who could crank out the 21st century equivalent of a shoestring ‘40s film noir. That kind of movie is totally within Cage’s skill-set, and probably runs in the veins of some viscerally-minded director on the fringes of the industry. If only the two could find each other. A Score to Settle suggests something that’s just within reach, but isn’t there yet.