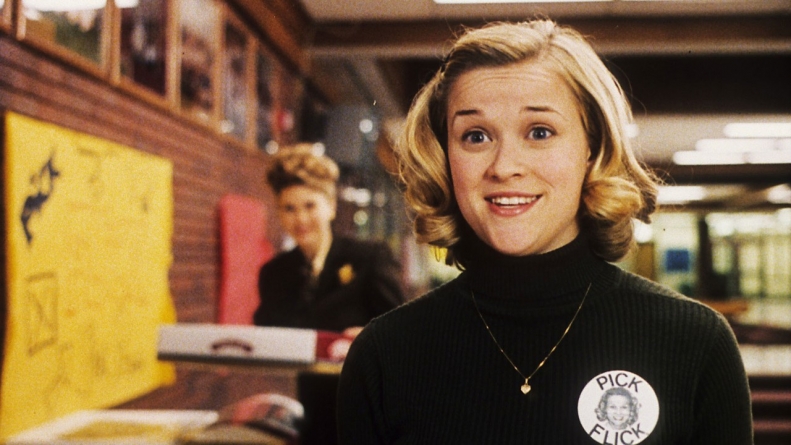 There’s a parable for the 2016 election buried here somewhere, though it doesn’t map cleanly.

I suspect that most of us who’ve seen Alexander Payne’s sophomore film, Election, based on the novel by Tom Perrotta, would agree that Tracy Flick is given the villain edit. Indeed, the movie’s original poster features her face in extreme close-up, beaming maniacally, with Matthew Broderick’s bewildered mug nestled in her gaping maw. Brought to acerbic life by Reese Witherspoon, in a dazzling breakout performance, Flick walks the tightrope between everyday hyper-competence and dirty, naked striving and scheming. The time has come to rehabilitate an unfairly maligned legacy. I’m with her.

Election is the rare teen comedy where young and old not only share the spotlight, but the supposed protagonist is its adult lead. Broderick plays Jim McAllister, Tracy’s archenemy and our ostensible hero, a stand-in for your most beloved high school teacher. Mr. M (whose instructional purview covers U.S. history, civics and current events) is a living legend at George Washington Carver High School in Omaha, Nebraska. He’s won Teacher of the Year three times and, in a pious voiceover, notes that it’s a school record. Jim is the kind of guy who mildly balks when you call him an actual saint.

Which, of course, he’s isn’t—not by a long shot. But it’s through his point of view that Payne, along with his screenwriting partner Jim Taylor, suggests that Tracy may be a monster in the making. Mr. M’s intense dislike for her, which eventually sows his demise, ultimately boils down to jealousy (which Tracy herself acknowledges in her own voiceover). And so, when she runs for student body president unopposed, Jim actively thwarts her. Tracy, mind you, is hardly complacent or entitled. She doesn’t expect to breeze right into office without putting in the hours and hours of campaign work. When Mr. M seeks to offer the students of Carver High a second option, he convinces the well-meaning jock Paul (Chris Klein, who plays a wonderful doofus) to run against Tracy simply on the basis of his built-in popularity. Paul, in turn, runs a half-assed campaign based on name recognition alone. Democracy at work!

So, what’s Jim’s problem with Tracy? First, she’s a striver, the first student to raise a hand whenever Mr. M poses a question to the class. In one scene, only she can parrot back his (somewhat nebulous) distinction between morals and ethics. You’d think any educator worth their salt would adore such conscientiousness and preparation. But Jim resents Tracy, the single tall poppy in the classroom, one who inadvertently needles his own insecurities.

He, in fact, hates her for another reason, one that exposes him as Election’s true monster. Tracy, you see, once had an “affair” with her teacher Dave Novotny (Mark Harelik), Jim’s colleague at Carver and a close family friend. When his highly inappropriate (if not criminal) sexual relationship with Tracy is discovered by her mother, Dave’s life is destroyed. He eventually moves back in with his parents, a divorced man now working at a hardware store. Late in the movie, Mr. M offers Tracy, his current student, this bit of sage advice: “Certain young and naive people need to thank their lucky stars and be very, very grateful that the entire school didn’t find out about certain indiscretions that could have ruined their reputations and their chances to win certain elections.” Need I remind you that Jim McAllister won Teacher of the Year three times? He goes on to cheat on his wife with Dave’s ex-wife, right before he rigs the election in Paul’s favor. Someone needs a pop quiz about morals and ethics. And maybe another bee sting on his eyelid.

Tracy is no angel, by any means. She tears down Paul’s campaign posters in a fit of irrational rage, and she lets his sister Tammy (the delightful Jessica Campbell) take the blame. But she’s also a kid from a single-parent family of modest means, who has been stretched to the limit with extracurricular commitments (she often works on the weekend). Paul, on the other hand, comes from a wealthy family and has no real ambitions other than partying and basking in the glow of popularity. Tracy wins the election by one vote after Paul refuses to cast a ballot for himself. It’s the right decision. She, the technocrat, clearly deserves the presidency.

There’s a parable for the 2016 election buried here somewhere, though it doesn’t map cleanly. Tracy is the obvious stand-in for Hillary Clinton—highly disliked but utterly capable. But Paul isn’t exactly Trump. He’s too kind and humble. Tammy’s political nihilism can be read as a third-party candidacy, but she, instead, embodies principled apathy. Jim McAllister, though, is the system both sides hate, a smug liberal who’s happy to subvert democracy in favor of a lazy, white rich dude. He, in other words, is the perfect villain. And Election, 20 years later? It feels too close for comfort.