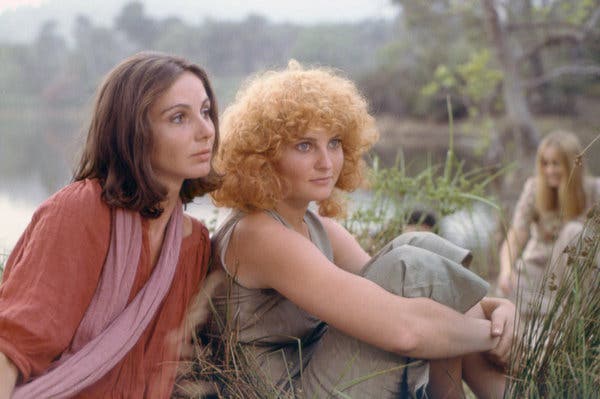 One Sings, the Other Doesn’t opens with a montage of silent women, figures in still photographs in various stages of undress, many with children or pregnant, and others standing alone, widowed and alone. These images, depersonalized and uncomfortable, are set against Agnès Varda’s handwritten notes dedicating the film to the various women’s groups supporting female filmmakers and who helped fund this independent feature. The clash between the photographs, taken with male-gaze interpretations of femininity, and Varda’s shoutouts to feminist activists establishes contradictions that reflect the film’s broader contrasts between characters and ideologies.

The two unnamed figures in the title are Pauline (Valérie Mairesse), a student with aspirations of being a singer, and her classmate Suzanne (Thérèse Liotard), who is having an affair with Jérôme (Robert Dadiès), the photographer responsible for the photos seen at the start of the film. The two teenagers immediately stand apart from each other: Suzanne, pliant and timid, has not only posed for Jérôme but has borne two of the married man’s children. Expecting a third, she panics over how she can live with a lover who makes so little and her own maternal responsibility and lack of job skills. Pauline, meanwhile, is headstrong and defiant. Though not yet politically active, she clearly chafes at the way things are, even down to her strong sense that Jérôme’s photographs are exploitative and hollow. Upon learning of Suzanne’s pregnancy, she encourages the girl to get an abortion without a second thought, and she fearlessly asks teachers if they know of a clinic before conning her own parents out of the cash that Suzanne needs to go to a clinic in Switzerland under the guise of a choir trip.

The film’s early scenes are largely framed as static tableaux, but the forcefulness of Pauline’s personality seems to compel the camera to move. When she mouths off to her father and he slaps her, the camera rushes forward, less in response to the man’s violence than in the intimidating rage that bursts across the teenager’s face. Pauline’s innate, willful anger later comes into play when Jérôme convinces her to model for him; he even gets her to pose nude, but for all his talk of pursuing the “naked truth” of women, the strength that radiates off of her even in her bashful covering of her genitals unnerves the man, who can’t explain why he is so put off but is clearly unused to his models projecting willpower over supplication.

When Suzanne’s abortion and affair are uncovered, chaos ensues. Jérôme, caught out by his wife, commits suicide, an act that traumatizes both Suzanne and Pauline and separates both, inspiring Pauline to leave home and make her way as a singer while Suzanne is sent to live with her parents on a rural farm. Varda, narrating the feature, casually elides over their fates to skip ahead 10 years to 1972, when the two inadvertently meet again in pro-choice protests at the courthouse of the Bobigny abortion trial. Varda, of course, had played with time before in her formal experiments with chronology in Cléo from 5 to 7, and she slowly complicates the otherwise linear movement of One Sings, the Other Doesn’t with flashbacks as the two women become pen pals and update each other on their lives.

Varda always struck a deft balance between aesthetic realism and poetry, and nowhere is that contrast more visible than in the stretch that breaks up the film’s forward progression in time. The Bobigny material is pure neorealism, right down to casting the actual lawyer from the real trial, but the flashbacks that fill us in on Pauline and Suzanne’s last decade are distinctively stylized. Pauline, who joined a political folk group, is documented in the brightly chromatic tones of a musical, her hilariously knotty, socially conscious songs (penned by Varda with sardonic wit), grounding the buoyant visual schema with lyrical realism. Suzanne’s years at the farm, on the other hand, resemble almost gothic drama, with blue-toned shots of the family farm in decay against a landscape of foggy, barren terrain that seems trapped in permanent winter. Varda’s narration mentions the emotional abuse that Suzanne suffered at the hands of her judgmental Catholic parents rather than wallow in misery, but the grim look and atmosphere of this sequence clearly communicate Suzanne’s haunted memories of this time.

Though apart, the two women grow ever closer by correspondence, and despite their dissimilar backgrounds, Pauline and Suzanne gradually reach equilibrium in their fight for reproductive rights. Suzanne, the teen mother initially too timid to function alone, teaches herself typing and becomes an activist, enjoying sexual partners but careful not to allow herself to get drawn into the traps of her younger days. Pauline, meanwhile, fights for abortion rights while embracing motherhood for herself, enjoying pregnancy and maternity so much that she even reunites with the partner that she dumps solely to impregnate her again before kicking him back to the curb. Varda deftly demonstrates that maternity is a choice as much as abortion, and indeed that the ability to choose motherhood rather than have it forced by biology and politics makes the act of childbearing that much more sacrosanct and fulfilling. That the director so casually discusses abortion at all is a radical act, and her ability to delve into the complexities of the subject, all in the form of a magic-realist, Demyesque musical, make One Sings, the Other Doesn’t an incredible feat and bold even by present standards.

The film concludes less with Suzanne and Pauline than the next generation they have sired who come into their own as the first vanguard of the post-women’s lib movement. Both mothers are careful not to assume that life will be smooth sailing for their daughters, but as we can see in Suzanne’s eldest child rejecting the advances of an overeager boy and getting him to approach her more respectfully, there is at least the possibility that these children will, in the words of Varda’s narration, have things “simpler and clearer.” That phrase could also describe Varda’s approach to the film, juggling the contradictions and passions of the subject into something cogent, well-ordered and ultimately celebratory.