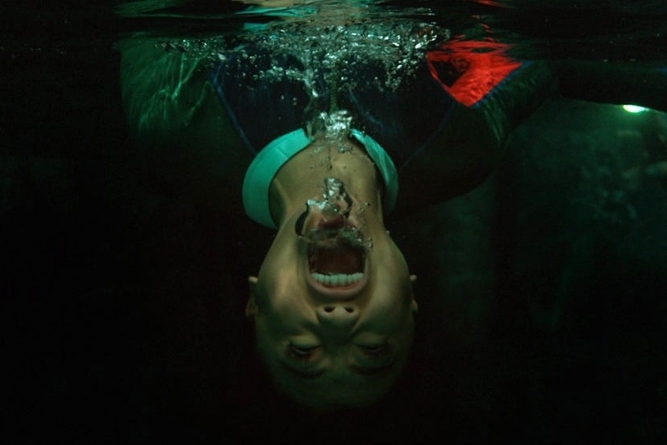 Some of the shark scares work, but more often than not, it begins to feel like The Blair Witch Project but even less coherent and with far more heavy breathing.

With the first 47 Meters Down film, writer/director Johannes Roberts created an undersea thriller somewhere between the auteurist pulp of Jaws and the lowest-common-denominator schlock of Sharknado. It was a shrewd, economical film with enough suspense to make up for its idiotic premise. But for its Uncaged sequel, he tinkers with the formula just enough to drag more mileage from this threadbare franchise.

Uncaged trades the blood siblings of the original for a pair of feuding step-sisters forced into a blended family neither seems eager to call home. Mia (Sophie Nélisse) isn’t fitting in at school in her new home in Brazil, but her father (John Corbett) and his new wife (Nia Long) love the setting for his underwater research and exploration. Her new sister Sasha (Corinne Foxx, daughter of Jamie) is too popular to care about scuba diving and Mayan ruins or whatever, but when her and her friends decide to steal a bunch of dad’s gear and go traipsing around an ancient city, Mia joins and finds herself bonding for the first time in a long time.

So of course they get lost down there with dwindling oxygen tanks and murderous sharks. Of course no one even knows where they are because they bailed on a safer cruise nearby. OF COURSE the only person who can save them gets comically masticated by said shark in the absolute funniest shark-related on-screen death since Samuel L. Jackson in Deep Blue Sea! It’s all laid out in a manner that’s too cute by half. The original film had a loose and offensive premise, but the execution was impressive enough to forget its clunky first act.

Here, more screenwriting energy (from Roberts and co-writer Ernest Riera) gets expelled in the set-up, building effective tension in the film’s first half, but the murkier and more complex approach to the actual shark material is less well staged. It’s hard to criticize the filmmakers here for aiming higher with the emotional and thematic content of the film’s foundation, but when a film is sold on shark action, does anybody really care about two disaffected sisters who become besties?

None of the performers here, bar maybe Corbett, are doing the kind of work necessary to ground this story in a way that could possibly matter. They’re interesting enough to watch, sure, but none prove half as compelling as Mandy Moore was in the last outing. The idea of stepping outside the confines of the first film’s shark cage and making a labyrinthian cityscape this harrowing maze for the cast to get lost in works great on paper, but Roberts loses some clarity in his action geography here. Some of the shark scares work, but more often than not, it begins to feel like The Blair Witch Project but even less coherent and with far more heavy breathing.

Unfortunately, Uncaged doesn’t truly come alive until the third act, when the film regains some of the cruel and fateful humor of its predecessor, wringing maximum suspense from one final set piece that delivers where the rest of the film fails. It works so well because by this point the franchise has established that no one is safe, no character more important to the narrative’s conclusion than the potential glee their extravagantly arranged death might elicit. In the unlikely event this succeeds enough for Roberts to get a third chance at bat, hopefully it’s in these final moments his next outing begins, relishing in the carnage and absurdity of this subgenre rather than treading water trying to feebly rise above it.