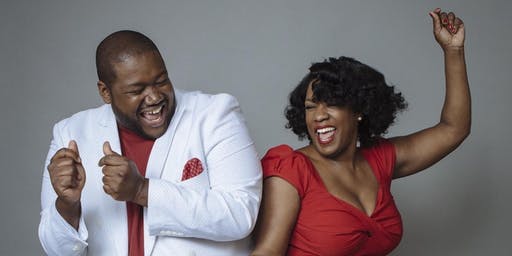 Imagine if two people with the magnetism, joy, and talent of Charles Bradley were a happily married couple, and gave themselves the license – and the genre – to really exhibit unbridled passion.

Let’s talk about synergy. We all hope to be part of a team that’s more than the sum of its parts, and at their best, bands should exhibit this – creativity breeds creativity, and great musicians are always stronger when working with other equally talented people. Something lesser seen is how this can work in terms of stage presence. The War & Treaty – the Michigan-based soul/funk band centered around power couple Michael (who mans keys) and Tonya Trotter, are a band that exist to be an example of how the combined charisma of two people can elevate a band in ways that can’t be faked. Imagine if two people with the magnetism, joy, and talent of Charles Bradley were a happily married couple, and gave themselves the license – and the genre – to really exhibit unbridled passion.

The two exhibit something really special when they step onto a stage together. They banter, they tease each other, they hug and kiss and feel like the more down-to-earth modern answer to Ike and Tina Turner; the reviews practically write themselves. Their brand of soul isn’t “groundbreaking”, but it’s seeped in a love of the music that makes their power impossible to ignore. Many Portlanders first became hypnotized by the band at 2018’s Pickathon, where they gave the festival two of its most awe-inspiring sets of that year. Anyone shocked or surprised that their heavily-awaited return to the city in the form of a headline show at Mississippi Studios clearly hasn’t seen them perform

The upside is that they didn’t need to win crowds over the way they did on their last visit. The entire venue was eating out of their hands from moment one, immediately enthralled by the force of Tonya and Michael. Kicking off with their hit “Hi Ho,” the duo – as well as their 6-piece band – seemed primed to blow the roof off the place early. But because this was their crowd, they didn’t stay there. They allowed things to get moody as well with songs like “Lonely in My Grief,” their voices not just powerful and commanding, but highly-skilled. it’s easy to sound great when you let loose and wail, but watching those people switch and demonstrate their control is another thing entirely. For the evening, six of the eight members wore various War & Treaty shirts, with Tonya dressed in a stunning blue dress.

The night may have otherwise been an entirely joyous homecoming, but the deaths of Brad Swet and Brandon Blackmore, the two young arborists who suffered a fatal accident during takedown of Pickathon, looms large over lovers of the festival (as a side note, if you can donate to the Memorial Fund set up for the two, please do). Midway through, after dedicating the show two the two, Michael revealed that the band had been asked by the festival’s founders to make sure the show was a place of healing and love – which made the lion’s share of the crowd cheer. They aren’t a Portland band, but they’re family, and their tribute really hammered that home.

The performance wasn’t about the sorrows of grief but the chance to unify people with the outpouring of love that comes out when we publicly grieve with our community, and Michael and Tonya are uniquely qualified to use that as fuel. Playing a ton of unreleased work can lose you an audience if you aren’t careful, but they were able to deliver a bevy of new songs from their forthcoming album, Hearts Town (also the name of a “fan neighborhood” they’ve created on Facebook) – “Don’t tell anyone! If anybody asks me, I’ll say you’re lyin’!” Michael exclaimed when he began talking about the album, due out next year – without having to work to keep the venue wrapped around their fingers.

After a brief encore break, the full band returned for a couple songs, after which Tonya and Michael were left alone to do a victory lap, with just Michael playing piano while they sang. “We’ve got just one more for you” became two or three – it all bled together beautifully – and the 11:30 end time shrank in the rearview mirror, the crowd in stunned silence. When they finally took their bow and the crowd erupted in cheers and applause once more, you could feel the little sorrow left in the building evaporate. Anyone can be charismatic, but what they did at Mississippi Studios was something else entirely.