When history comes knocking, Shelton “Spike” Lee will be remembered for many things. He will be Spike the demagogue, the angry young man with loud opinions and an articulacy that demands to be heard. He will be Spike the cultural provocateur, unafraid to stir up feuds and controversies both deserving and facetious. He will even be Spike the Knicks fan, nearly as famous for his courtside rages as his impressive filmography. But he should rightfully be remembered most of all as Spike the filmmaker, a prodigiously talented director and writer who has evolved and matured before viewers’ eyes even while his oeuvre is populated with brilliant, perplexed, sublime and sometimes even outright bad films. After all, that’s the purpose of this very feature. And when Spike the filmmaker is discussed, one movie will always be brought up: Do the Right Thing.

At this point Do the Right Thing appears as much like a cultural flashpoint as it does a film. In the year 1989, New York City was experiencing an artistic renaissance, albeit one easy to romanticize in retrospect. Hip-hop had reached an unprecedented level of cultural saturation, one that arrested attention and was the focus of increasing paranoia from self-proclaimed guardians of morality like the Parents Music Resource Center (whose de facto leader Tipper Gore accused seminal rapper Ice-T of causing violence towards police in Los Angeles). The art community was reeling from the tragically early death of Jean-Michel Basquiat, as well as still coming to terms with the suddenly enormous influence of graffiti art (and arguably how to commodify it). Lee, perhaps the foremost African-American director in the world and definitely the most visible, released his third feature film to both acclaim and controversy. In short, Do the Right Thing came into the world in an atmosphere of intense creativity and confusion. To put it even more succinctly: it’s a fucked up world out there.

And Do the Right Thing is a film not afraid to point that out, just as its creator hasn’t. Lee’s never been given enough credit for his ability to handle ambiguity with such ease you forget it’s one of his primary themes. Even more than his previous films She’s Gotta Have It and School Daze, Do the Right Thing allows no easy answer, not even permitting the black and white choices those two films ostensibly presented. She’s Gotta Have It saddled its title heroine with three potential suitors, all with flaws and virtues; ultimately the question is really whether she needs to choose, but there are at least distinct opportunities. In School Daze a traditionally African-American college offers a number of social cliques, fraternities, sororities and economic realities for students to align themselves with, but ends on a troubled but unified student body indicating the illusion of division. Do the Right Thing is both the natural evolution of this concept and a leap forward from it. In this film, the choices are overwhelmingly large in concept and seemingly unworkable. But it’s right there in the title: when faced with a tough choice, what to do? As Da Mayor (Ossie Davis) puts it, simply do the right thing. 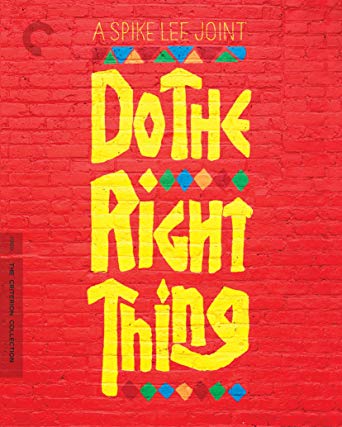 While discussion of that central question tends to revolve around the climactic street riot near the film’s close, it is easy to forget Do the Right Thing is essentially a character study. That character is not the enigmatic Radio Raheem (Bill Nunn), wannabe firebrand Buggin’ Out (Giancarlo Esposito), surly pizzeria proprietor Sal (Danny Aiello) or even the ostensible protagonist Mookie (Lee in his best, most low-key performance). It’s a study of the character of a neighborhood, in the rhythms, languages, tensions and friendships that develop whenever human beings congregate in closed spaces and carve out niches for themselves. Although the violence and intensity of the riot that destroys Sal’s Pizzeria is a powerful sequence and a moment of horrible negative catharsis for both the individuals in the movie and viewers watching it, the bulk of the film is simply spent developing an ordinary Bed-Stuy neighborhood in Brooklyn. And while the neighborhood comes to a violent boil at the end of a hot summer day, it’s also a window into the simple pleasures of life and the many facets of people who would be stock types in a lesser film. Teenagers (including a young Martin Lawrence in his film debut) joke and roughhouse on brownstone stoops, later opening up a fire hydrant to soak the street in an upbeat sequence; the destitute Da Mayor sweeps the pavement for cash to buy a beer from the local Korean market; lovers Mookie and Tina (Rosie Perez, also in her debut) meet to argue, reconcile, make love and argue again. There’s a dark flipside to all of this, naturally enough. Mookie and Sal’s eldest son Pino (John Turturro) argue in the pizzeria, enough loaded language thrown around to make anyone squeamish. Buggin’ Out harasses an oblivious cyclist over a scuffed pair of shoes; Sal and Raheem barely manage to keep their respective tempers over a pizza transaction and a boombox blasting Public Enemy’s “Fight the Power.” But even with that negativity, it’s still a beautiful, sentimental (but not mawkish) look at an environment Lee clearly loves.

As ambiguous as the film’s message may be, it is without question an incredibly stylish and stylized piece of cinema. Only a year after School Daze’s cartoonish musical sequence and sometimes Looney Tunes physicality, Lee had tempered his impulses enough to create scenes that were both realistic and dizzyingly impressionistic. While his previous homage to musical theater resulted in sequences that swayed between dance number and extended hair-pulling catfight, the famous montage of various characters reciting racial slurs at a hammeringly breathless pace seems wholly part of the movie even while not having a direct place in the plot or pacing. A lineup of characters we’ve come to care about (even minor ones) stare directly at the viewer and throw out every hateful word you can think of for every ethnicity represented, and while clearly not part of the narrative it’s wholly necessary and distinctive, like a series of ignorant and hate-filled inner monologues. It does not speak to what Mookie, Pino and Sal say aloud, but to what simmers underneath it every day.

The ostensible seed of the tensions of this particular day is planted early in the film, when Buggin’ Out notices the “Wall of Fame” in Sal’s Pizzeria only has pictures of famous Italians and zero African-Americans. He insists that Sal integrate the wall and is swiftly kicked out for his trouble, spending the rest of the story attempting to get others to boycott the place and eventually forcibly demand change. He is joined by Raheem and a mentally disabled man (Roger Guenveur Smith) and show up at Sal’s, who reacts by smashing Raheem’s boombox and initiates a burst of violence that ends with his store gutted and burned. Put in stark terms it sounds simple. Violence begets violence, and lack of communication or willingness to compromise destroys everyone. But the power of Do the Right Thing is in its ability to show nuance in all situations, to neither demonize nor deify but present their realistic intensity. Buggin’ Out is clearly itching for an argument, even when the movie begins, but he has a point. Why is there no representation in a nearly all African-American neighborhood establishment patronized almost exclusively by African-Americans? But on the other hand, it’s a privately owned business by a man who wants to show pride in his own heritage and enjoys serving his community. The central conflict is unmistakably tense, but is also nearly indefinable. Is it about race, the white man struggling to retain power and authority in changing times? Is it about the blindness of struggle, in which zealots are willing to destroy a world to try to save it? Is it about respect for others? Respect for one’s self?

It’s would be an easy out to say it’s about all of these things, but in truth, I don’t think that Do the Right Thing is. Lee made a much greater and more important movie than a simple polemic – one that considers the problems at hand and leaves them up to a viewer rather than simply proselytizing. When Da Mayor tells a distracted Mookie that all you need is to “do the right thing,” Mookie shrugs it off and moves on; it’s a telling moment, not because it’s a piece of wisdom that is ignored at one’s peril, but for the opposite reason. It’s a meaningless phrase, the kind of thing that people tell themselves for comfort and peace of mind in easy times. What Do the Right Thing} does is showcase the rash decision-making, confusion and violence that occurs when answers aren’t self-evident. Lee would tell similar stories with Summer of Sam and Crooklyn and move on to more stately films like Malcolm X, but Do the Right Thing saw a filmmaker at the extreme apex of his abilities, one who transformed his affectations into style and his opinions into public debate.