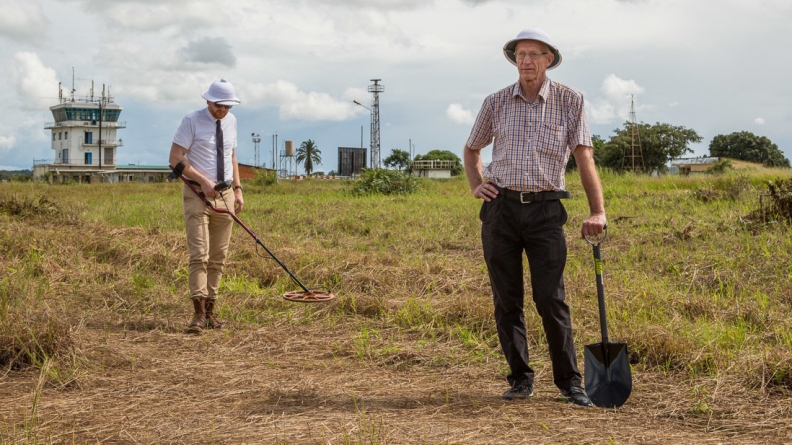 A deep dive into murky historical waters, Cold Case Hammarskjöld plumbs the place where accepted factual record and conspiracy theories commingle. Ostensibly an exploration into the death of UN Secretary General Dag Hammarskjöld, it’s shambolic, clue-chasing approach ends up more focused on probing the slippery nature of truth itself, a familiar bugbear for genre-bending quasi-documentaries of this stripe. Presenting a bevy of convincing evidence to some shady activity behind Hammarskjöld’s 1961 demise – in a plane crash upon landing into the Rhodesian apartheid state – it also purposefully destabilizes its argument, pushing further into ambiguity rather than nailing down these claims. The product of a defined stylistic perspective, it still suffers from the same problem as many modern documentaries, providing a surfeit of information while struggling to find an appropriate visual platform within which to present it.

There’s also the question of whether director Mads Brügger’s puckish method of poking colonial wounds is ill-considered, or even offensive, with the film’s rough handling of these issues relying on an ironically solemn tone that skirts the borders of parody. This faux-sincere solemnity, witnessed most clearly in an interrogative roundelay conducted in paired hotel rooms, finds Brügger basically mansplaining recent African history to two native women acting as his temporary secretary, a scenario whose utility will only become obvious toward the end. There’s an air of knowing pastiche to this white savior scenario, which finds a parallel in a few even-more-shaky investigatory scenes, in which Brügger and a companion don white safari suits and pith helmets to carry out an on-the-ground excavation at the crash site.

As with 2011’s The Ambassador, a jaunty expose of local Liberian corruption which got him into hot water in the country, Brügger seems to be spoofing the figure of the star documentarian, the supposed truth-seeking renegade who casts as much focus on himself as the topic being analyzed. This jab comes across clearly, but it’s not always as evident who or what else is being satirized, and the sight of the director stumbling through a deadpan Sacha Baron Cohen routine at location where a dozen people died seems in pointed bad taste. Intent on taking colonial Europe to task for its crimes, while also lampooning the notion that such a massive reckoning is possible at all, Cold Case Hammarskjöld takes on too heavy of a load, it’s attempts at dry, caustic caricature crossed with earnest reportage leaving it completely crossed up.

That some of the revelations here are genuinely groundbreaking thus seems to conflict with the scattershot attempts at subtextual subversion, as the crash inquiry slips off into broader offenses, including the potential purposeful diffusion of AIDS to Africans in service of a white supremacist extermination plot. This might be interpreted as the core of the film’s thesis – that pulling any random thread of colonial wrongdoing ultimately leads to a muddy root of staggering racist criminality – but the commitment to concealing this message behind tongue-in-cheek burlesque leaves this point obscured. Positioned somewhere between a genuine investigation into Hammarskjöld’s murder and a spoof of directorial navel-gazing quests posing as political praxis, Cold Case Hammarskjöld wants to be a film about the collision between these two modes, but it’s awkward, in-between status only confirms the failure to fully carry off such a complicated maneuver.