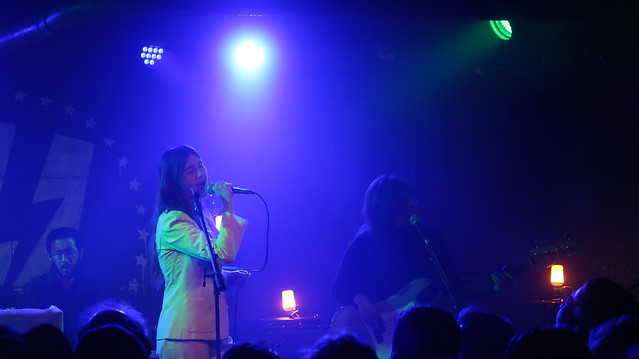 Mering has become bolder as a performer, her songs emotionally full-throated.

The latest touring plan for up-and-coming artists sort of looks like this: bring the act through town and have them play small venues that are guaranteed to sell out. Allow word of mouth of to build and then bring said band back a few months later, but this time in a much bigger place. Remember how long it used to take for movies to go from the theater to VHS or DVD? Now, the turnaround time is astonishing. It’s the same thing for some concerts now, it seems. Wait long enough and the band you missed will be back at a bigger venue making it easier to get a ticket.

Though catching Natalie Mering and her Weyes Blood project at the much-smaller Doug Fir back in May would have been an intimate affair in a more appealing room, the songs from her latest album, Titanic Rising, feel like they were designed for a bigger space. A buzzy energy filled the Wonder Ballroom before she took the stage. The musician did make her television debut on “Seth Meyers” just a few nights before. Has she ever been so popular?

Mering, dressed in a white pantsuit, kicked off the set with “A Lot’s Gonna Change,” its big sound, almost a throwback to the lush music of Carpenters, filling the venue. It has been a few years since I’ve seen Mering play, but she has become bolder as a performer, her songs emotionally full-throated. Though most of the fans in the almost sold-out room appeared to be in their 20s, a handful of teenagers stood at the front of the all-ages section and sang along.

Over the course of 75 minutes, Mering played 14 songs, heavily drawing from Titanic and prior album, Front Row Seat to Earth. Many of the older songs, such as “Used to Be” felt more fleshed-out, emboldened. Though Mering’s band helped fill out her songs, bassist Eliana Athayde was the secret weapon of the evening, her ethereal voice blending with Mering’s more earthy vocals.

Mering was talkative during the set, introducing most of the songs and providing some context. Though she seemed straight-faced and serious, Mering did inject levity into the evening whether commenting about the string of mid-tempo pieces or doing intentionally funny miming and dance moves during the instrumental portions of “Movies” or commenting on “last song” before the encore “Do You Need My Love” as if they were truly done for the night.

Of course, the band came back for a few more songs. Mering began the encore with a version of Procol Harum’s “A Whiter Shade of Pale.” Even though it wasn’t the most adventurous of covers, she did in justice. In fact, only “Seven Words” missed its mark that evening. But after finishing with “Generation Why,” the band left the stage, leaving Mering alone to play a solo version of “In the Beginning.” It makes sense that Mering end the night with the oldest song of the evening (despite coming from a 2015 EP). Weyes Blood is at a point where it will likely only get more popular. That singular song at the end, in its hushed beauty, is a good reminder that even Mering, who seems poised for stardom, started someplace smaller.