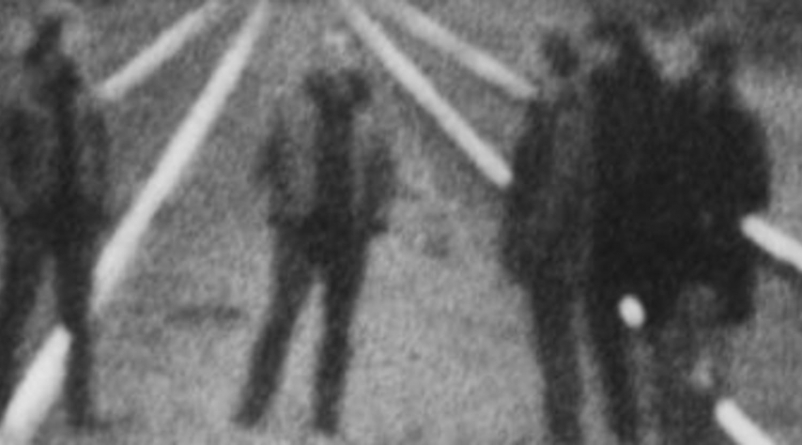 GY!BE aren’t really a “rock band,” are they?

It feels weird to take Godspeed You! Black Emperor for granted. It felt that way last time they came to Portland, before they did two nights at the Wonder Ballroom and blew the roof off the place. But nine years after their triumphant and ecstatically-awaited return from a breakup, it’s bizarre to see them on a venue schedule and say, “Do I need another GY!BE show?” Their recent Revolution Hall performance would be different: Revolution Hall offers seating, allowing for the audience to shift the experience away from that of a “rock show” and more into the space of “a performance.”

Marisa Anderson took the stage first, alone. Anderson is probably five years away from being recognized as a minor guitar god. She’s a plainspoken and charming woman with an elbow-length mane of gray hair, and she is perhaps one of the most unassuming wizards around. Her guitar playing isn’t “flashy,” but what makes it remarkable is that she’s able to create a microcosm of the evocative wordless spaces created by Godspeed themselves. Her introductions between songs served as her way of putting the audience in the worlds she’s creating as delicately as possible. She was also chatty and told stories about her day, relaying a story about a showgoer coming up to her and asking, “Why don’t you play any happy songs?” She then played one—it did seem much brighter, but not enough to outweigh songs as fiercely pointed as a new one she gave us, called “Children in Cages.”

Unsurprisingly, not a single word was spoken by any member of Godspeed You! Black Emperor. This was my fourth time seeing them, the first time with seating. Revolution Hall did this the right way—rather than leaving room for a standing pit, they simply set up more chairs in the front. This is important because GY!BE aren’t really a “rock band,” are they? They have guitars and bass and drums, but post-rock is far more orchestral than that, and performing in front of a seated audience reframes them as an orchestra playing the soundtrack for civil unrest and so much doom.

The band slowly took the stage amid minimal lighting and the colorless abstract images projected behind them, first the string section, then the guitars and bass, then the drummers. They each begin tuning up their instruments together, like a steadily growing swarm of insects. The drummers come on last, putting the finishing touches on their setups, the tension building as the drummers ready themselves. It could be easy to miss them if you get sucked into watching any other player onstage, but these two pieces are needed for the coming release. That finally comes five to 10 minutes in—post-rock time is a weird beast, who’s to say how long it was?—when the two finally enter the mix and everything springs to life. The cloud of noise takes shape and the image behind them changes: tracking shots of massive buildings under construction and the sprawl of the urban landscape, the mortal enemy of GY!BE.

These eight people (nine, with a saxophonist for a stretch) built an onslaught of peaks and valleys writ massive in the Hall. While Anderson used her between-song banter to tell the stories of her songs, GY!BE pair them with looming projections of grainy loops that serve as the film the band are scoring. What they show us isn’t surprising: stock market numbers, civil unrest of all types, suburban sprawl and shots of untold numbers of gravestones in snow-covered cemeteries. A massive movie theater-sized screen featured film loops of American concentration camps and alt-right rallies. Portland is no stranger to these images, and as always, their messaging preaches to an already angry choir here. On a loop, these images become more and more uncomfortable and difficult to avoid internalizing as they progress. Outside of a splash of red early on, we were treated largely to drab black and white and sepia-tone film strips, which also helped to boldly underline the one section of color film—everyone’s favorite, the police!—as though the audio clips of people sharing their struggles in rebellion against the state didn’t accomplish that for them.

Their setlist wasn’t very adventurous, but we were given two new songs, called “Glacier” and “Cliff.” They ended on one of their oldest cuts, “BBF3” from Slow Riot for New Zero Kanada, which they first used as their closer at their return to Portland in 2011. They left the stage with their drone still funneling through their amps, leading us to wonder if we’d get an encore from the band. We didn’t, but we weren’t left with nothing—instead, two of the members came back to manipulate and unbuild the drone, amp by amp, until it had completely dissipated. By this point, the room had largely cleared out, but being able to sit and let the music wash over us did make the experience feel different. It may be easy to take Godspeed You! Black Emperor for granted, but the world probably needs anarchist punks who make music fit to incite rebellion without saying a single word.