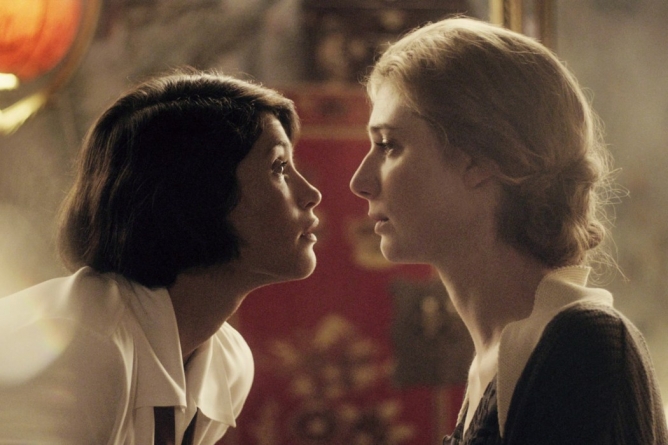 The reality of Vita and Virginia likely outshines this fiction, but as a story of sex, love, poetry and language, it pays its source respect and admiration.

The first rule of acceptance when viewing biopics must be that they are all fan fiction, a truth that Vita and Virginia, directed by Chanya Button, relishes. The film tells the story of the romance between renowned literary genius and depressive Virginia Woolf (Elizabeth Debicki) and popular author Vita Sackville-West (Gemma Arterton), and properly eschews fact for an exploration of the power dynamics between two lovers doomed by the opposite natures that drew them together. Based on a screenplay credited to Button and actress/playwright Eileen Atkins, the film is a sumptuous queer narrative for Anglophiles who spend their adoration on visually- and emotionally-arresting entertainment like the 1995 adaption of Pride and Prejudice or Atonement. For Button, English manors offer visual metaphors as lush as their grounds, and she takes every opportunity to frame worlds within worlds and the duality of reflections.

The film begins with a conversation about the nature of modern marriage on the radio between Vita and her husband, the diplomat Sir Harold Nicolson (Rupert Penry-Jones). They play the loving couple, discussing how marriage is like a negotiated contract in which the couple needs to define the terms for each partner’s fulfillment and success. When asked whether being a mother or bestselling author defines her, Vita playfully banters that they both have their advantages, but concludes her feminist argument with a line of self-definition: “Independence has no sex.” While clearly a successful woman with a modern sensibility, privilege shackles her to her family’s wealth and title. Her mother, Lady Sackville (Isabella Rossellini, a welcome sight), warns Vita that any more violations of heteronormativity will cost her her two sons and her fortune. Independence may have no sex, but the patriarchy has expectations.

Vita is not one to live life quietly, strutting around London in pinstripe pantsuits when not driving her convertible, and intends to cultivate her creative and emotional crush on Virginia Woolf. She has already set the strategy that will place them at the same party, something that Sir Harold disapproves of for unexpected reasons. While their love for each other is bountiful, Sir Harold is gay while Vita is polyamorous, a fact that often gets her into trouble that he fears he won’t be able to get her out of in the near future. Having been cautioned twice in a short amount of screen time, Vita ignores all concerns and begins her pursuit. In person, Woolf allures with her seeming detachment and unique verbal precision, which she offers with varying degrees of appropriateness. Woolf vows to always say exactly what she means, but that meaning is often masked in prose. She enchants Vita, and the popular author decides to initiate the affair with the genius by going into business with her. Virginia and her husband, Leonard (Peter Ferdinando), run The Hogarth Press and could use a hit.

Arterton imbues Vita with an emotional range between coquette and lothario. She is a wildly impulsive person who wants to consume her lovers, separating them from their lives with gifts and travel. She is predatory, and Button stages a fantastic sequence where Woolf descends a staircase in Vita’s family manor, featuring the walls around her, lined with hunting trophies. As Woolf, Debicki avoids the sort of prosthetic wonder that garnered Nicole Kidman attention, opting to play the famous author with fragility and power. She is initially reluctant about Vita’s advances, exhibiting an asexuality and sexual reluctance even toward her husband whom she clearly loves. Vita’s dogged pursuit changes Virginia in terms of sex and love, but Vita can’t be faithful, and Woolf refuses to broker her betrayals.

Both actors carry the film and the supporting cast is a delight to watch. Debicki and Button also handle Woolf’s depressive episodes with subtlety and respect, qualities too often absent when mental illness is performed onscreen. It is also a relief that Woolf, as a mentally-ill creative genius, is not a trope used to catalyze the film. Vita and her imperfections propel the film until the end when Woolf reasserts her strength in making Vita the inspiration for Orlando: A Biography, the classic novel about a man who changes sexes and lives for centuries as a woman. Vita becomes the focus of the genius she coveted and withers under the intensity.

The reality of Vita and Virginia likely outshines this fiction, but as a story of sex, love, poetry and language, it pays its source respect and admiration. Experts in Woolf and Sackville-West will have their issues, but it is a noble effort and fine film for the rest of us.