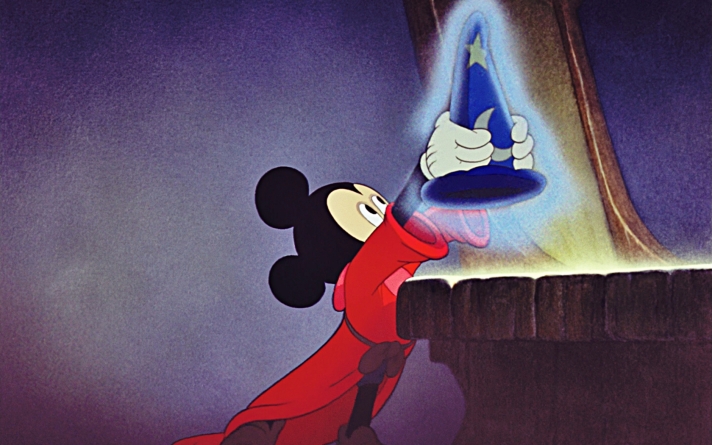 Has pure art and popular culture merged so completely, so uniquely and so beautifully on the silver screen since Walt Disney unleashed Fantasia in 1940?

Has pure art and popular culture merged so completely, so uniquely and so beautifully on the silver screen since Walt Disney unleashed Fantasia in 1940? If there’s a better example, point me to it. This film, a marvel of hand-drawn animation set to immortal works of classical music, is a cinematic masterpiece that belongs both in a marble museum, a place of solemn contemplation and the multiplex, that temple of mass consumption. High and low seamlessly unite throughout its two-hour-plus runtime (which, concert-like, includes a 15-minute bathroom break).

Fantasia is ostensibly for children, much like The Young Person’s Guide to the Orchestra, the instructional composition by Benjamin Britten, which followed the film by five years and was recently featured early into Wes Anderson’s 2012 masterwork Moonrise Kingdom. Disney likes to think grown-up culture can be fun for everyone; Epcot (the park that happily peddles booze to frazzled parents) charges big bucks under the same mistaken assumption. Alas, the majority of kids today are more interested in amateurish YouTube videos than elaborately designed orchestral shorts. Fantasia’s sophisticated pop art feast is, instead, better suited for adults. This, however, is a feature, not a bug.

Master of Ceremonies Deems Taylor – a composer and music critic who, at the time, was known as “the Dean of American music” – introduces Fantasia as “a new form of entertainment,” which is only partly true. Walt Disney originally imagined Fantasia as an ongoing cinematic project. The film would have been updated every few years, like software, with each subsequent release replacing the previous iteration. This, of course, never came to pass (though a long-overdue sequel was finally released in 1999). But in another sense, Fantasia provided a proof of concept for the music video, a format that dominated youth culture in the ‘80s and ‘90s and still endures today…on YouTube. In that sense, the film has been hugely influential, even if it’s more respected than beloved.

Despite its stuffy, almost professorial interjections by Taylor, Fantasia remains awesome, in the literal sense of the word. These seven segments (and an intermission), created by an army of expert animators and bolstered by the Philadelphia Orchestra (with the great Leopold Stokowski at the helm), stand as monuments of the American hand-drawn form. They span three categories: pure narrative (The Sorcerer’s Apprentice), non-narrative but with character elements (The Nutcracker Suite, Dance of the Hours), and pure abstraction (Toccata and Fugue in D minor).

The Sorcerer’s Apprentice, a reimagining of Paul Dukas’ 1897 symphonic poem (itself based on an older Goethe ballad), may be the best-known segment, an instantly iconic featurette starring a hapless Mickey Mouse in the title role. And it still holds up, marvelous as ever, almost 80 years later. But Fantasia works best when it takes more popular orchestral compositions – by Beethoven, Tchaikovsky, Bach, Stravinsky, Mussorgsky and Schubert – and makes them even more whimsical, bizarre and terrifying.

Among the finest of the bunch is Fantasia’s opener, the Toccata and Fugue segment. An example of “absolute music,” it seeks to evoke the images that “might pass through your mind, if you sat in a concert hall” while listening to Bach’s organ piece. What unfolds is an animated whirligig of colors, lines, dots, curves and planes; wisps of simple geometry that dance in breathtaking synchronicity with the soundtrack’s ominous motifs. You could call it trippy, but the term hadn’t yet been coined. It’s downright phantasmagorical.

Even more wondrous is the Stravinsky movement, which imagines the birth of life on Earth starting with galactic barrenness and ending with the rise and fall of the dinosaurs, set against the composer’s Rite of Spring. (An obvious inspiration for Terrence Malick’s most audacious and polarizing sequence in The Tree of Life.) No less impressive is Fantasia’s profane and sacred conclusion, which starts with a demonic nightmare (Night on Bald Mountain) that’s extinguished by choral chanting and the first light of dawn (Ave Maria). It’s a perfect Disney ending, with hope reigning supreme.

Fantasia’s single false note is glaring. Beethoven’s Pastoral Symphony is a tedious Greco-Roman relic that’s, at best, elegantly rendered and, at worst, a paean to white supremacy. The sequence once featured shots of two stereotypically black centaurs who happily act as the help (shining the hooves of, and rolling the red carpet out for, larger and more European-looking equines). Though Sunflower and Otika have been scrubbed away from later versions of Fantasia, the stench of minstrelsy and racism lingers. In a way, this pageant of whiteness seems fouler by their erasure, an easy fix to a deeply problematic segment.

When it comes to unadulterated ambition, no American animated movie has yet matched Fantasia. I’d love to witness a collection of (reliably superb) Pixar shorts dethrone this aging masterpiece. But for all its faults (racist centaurs) and anachronisms (how do you do, Deems Taylor?), Fantasia towers as a one-of-a-kind experiment, a quixotic triumph that nowadays is more felt than seen.