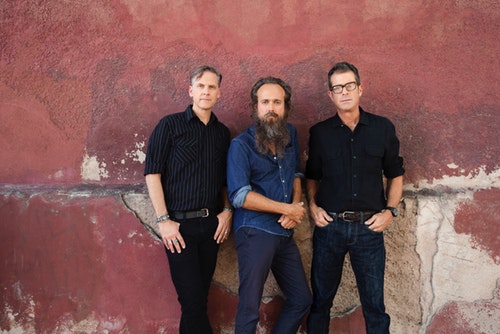 While Iron & Wine and Calexico tour separately all the time, seeing both play together is a rare treat.

When Calexico and Iron & Wine released EP In the Reins in 2005, both groups of musicians were coming off career-high albums. Calexico put out Feast of Wire, still arguably the Tucson-based collective’s best, just two years prior while Sam Beam dropped his hushed masterpiece, Our Endless Numbered Days just a year before. Calexico and Iron & Wine mounted a tour in late 2005 where they each played separate sets and then joined forces for a cinematic clutch of songs that drew from both the EP and some cover versions. It was an ecstatic tour with both Calexico’s Joey Burns and Beam performing at the top of their game.

Fast-forward 14 years later and the two have finally joined forces again to release the pleasant Years to Burn album. Calexico has plugged along since then, releasing a series of well-received records that does little to alter its initial sound, drawing crowds at mid-sized theaters. Meanwhile, Beam jumped to Warner Brothers and moved past the quiet, breathy paeans of his first few releases for looser arrangements that called for improvisation. Though Beam can still fill a large theater, his songs do not compare to those on his Sub Pop releases.

Together, the groups possess an alchemy that helped nearly sell-out the almost 3,000-capacity Keller Auditorium. Rather than play separate sets this time around, Beam joined Burns and Calexico stalwarts John Convertino (drums) and Jacob Valenzuela (trumpet), along with bassist Sebastian Steinberg and accordionist Rob Burger, to play the entire show as a singular unit. Though it didn’t reach the transcendent heights of their last tour- the other backing members of Calexico were missed- the group still played a gorgeous 19-song set that spoke to the strengths of both the Calexico and Iron & Wine projects.

The first portion of the 80-minute set saw Burns and Beam trading off vocals on songs from both In the Reins and Years to Burn. It took them some time to find their footing as “Dead Man’s Will” and “Midnight Sun” felt tentative and a cover of Echo and the Bunnymen’s “Bring on the Dancing Horses” appeared way too early in the set. However, the musicians locked in with a stirring version of “Sixteen, Maybe Less” a few songs into the show and the concert took off from there.

At times, when Burns and Beam sang together, the group felt like it had always been one unit, their voices blending in perfect harmony. Midway through the set, all of the other musicians left the stage and the two men picked songs from each other’s catalogs to share together including “Flightless Bird, American Mouth” and “Bisbee Blue.” Beam bantered more with the crowd than Burns but both men shared equal time as vocalist.

The band rejoined them for the final portion of the concert, stretching things out for an extended jam on “Red Dust” and new song “The Bitter Suite.” Though Calexico’s Southwest-inspired songs were missing, save “Flores y Tamales,” those cumbia-inspired tunes would have weird in a seated auditorium. One guy tried to get everyone on their feet and dancing but ended up nothing more than a disappointed silhouette when no one joined him.

While Iron & Wine and Calexico tour separately all the time, seeing both play together is a rare treat. Hopefully it won’t be another 14 years before they mount another tour, but those lucky enough to catch this recent spate of shows, or even those years before, will likely relish the warm memories flowing from the performance.