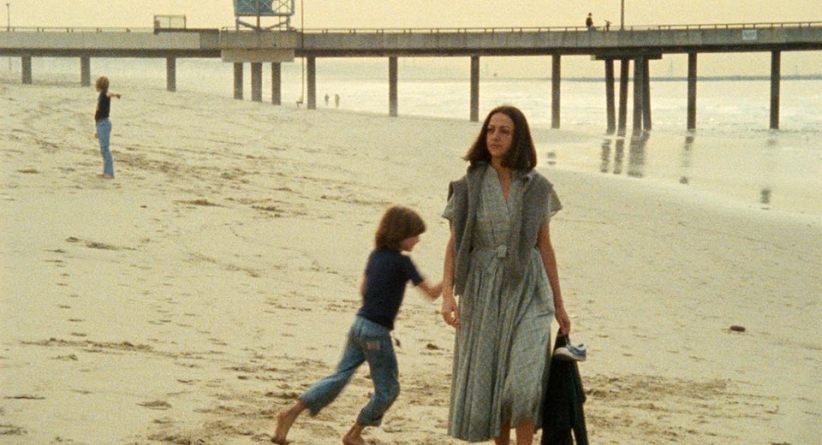 Just the sort of metatextual joke that the French New Wave crowd were always making in their cinema.

When watching Documenteur, it is readily apparent that the film was made more or less simultaneously with Varda’s previous film, Murals Murals. Both are set in late-‘70s Los Angeles, both feature several of the city’s iconic street art installations and both feature the actress Sabine Mamou. In fact, in Documenteur, Mamou plays the fictional Emilie Cooper, a French immigrant/personal assistant who is serendipitously cast in the role of narrator for Murals Murals by a harried film crew desperate to meet a deadline. It is just the sort of metatextual joke that the French New Wave crowd were always making in their cinema.

Like with Murals Murals, the visual ethos of Documenteur is about the juxtaposition of the sunny, mythical L.A. of palm trees and sandy strands with the dingy, multiracial L.A. of graffiti-strewn apartment blocks and overburdened alleyway dumpsters. Here again, Varda makes Los Angeles a dreamscape of escapist hedonism, but then repurposes it into a real, lived-in modern city. There is the pier transformed into just the local fishing hole, the white sand beach cluttered with garbage and earth-moving vehicles and the lush seaside house turned into a workaday office space. In this stage of her career, Varda seems to have been infatuated with the confrontation between myth and reality concerning Los Angeles in the popular imagination. Just like Murals Murals, Documenteur is shouting at the viewer that Tinseltown is a mere paper veneer covering up the same ole shit that plagues every other city: overcrowding, high rent, piss-scented alleys, ethnic tension and on and on.

But Documenteur, in spite of its similarities (and shared sight gags and metatextual winks) with Murals Murals, is also a very different film from its immediate predecessor within Varda’s oeuvre. Documenteur is neither celebratory nor defiant, but rather melancholy. Like every Varda film, it tackles grand social issues, but here the approach is much more personal than political. Varda gestures at some of the urban problems that she takes on more forthrightly in Murals Murals, but does not focus on them, confining herself to primarily addressing the isolation of her main character.

Mamou’s Cooper is suffering in the big city, alienated from other people by the demands of trying to scrape by a living. The film’s opening image, featuring Cooper standing in front of the famous—partially because it is heavily featured in Murals Murals—post-apocalyptic mural titled Isle of California, says it all: she is stuck on her own little island with no hope for escape. She works alone, and then she rushes home to pick up her son, Martin (Mathieu Demy, Varda’s own son) from school and spends the rest of her day trapped in the house with a clingy eight-year-old. Her condition is even more dire than this at the start of the film, where she does not have even an apartment of her own and is instead a couch-surfing vagabond begging a few nights’ shelter from various acquaintances. Her atomization from the rest of society is deepened by the fact that Cooper has just ended her long-term relationship with Martin’s father, under circumstances that are never revealed to the viewer.

When Cooper finally decides that she has reached a breaking point and takes just a bit of time for herself, it sends Martin, who returned from school to an empty apartment because of it, into a fit of rage. Cooper, it seems, is trapped by her past choices and locked into life circumstances that cannot help but generate ennui, social dislocation and, ultimately, a lack of personal fulfillment. She is the opposite of the prototypical cinematic protagonist, but so very like most working people, who, while not necessarily unhappy with their everyday lives, have little possibility of ever changing those. Few of us ever have the privilege of feeling much agency, especially once we age into true adulthood. Even with all of the freedom generated by modernity’s technological advances and political structures, we are just as unfree and locked into our choices as our ancestors.