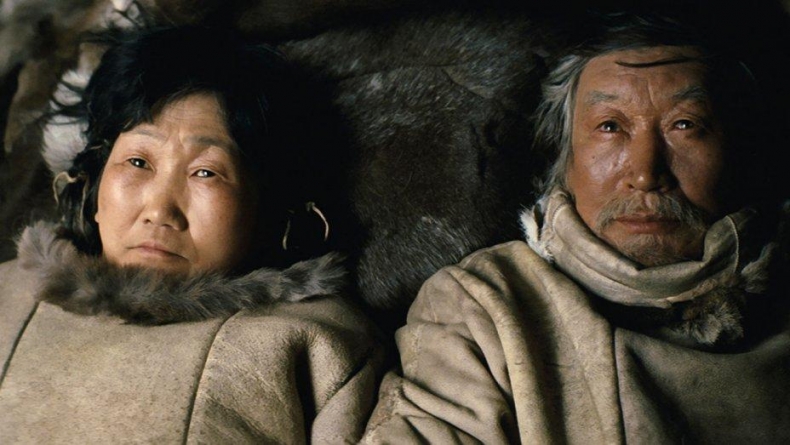 In one of the first shots of Milko Lazarov’s Aga, the camera holds on a snowy, white expanse, but its scale is impossible to parse. It could be a particularly cloudy sky, or a wintry lawn viewed askance. But once the film’s protagonist Nanook (Mikhail Aprosimov) rides into frame, it becomes clear just how vast this tundra truly is, as his diminutive frame may as well be an imperceptible speck.

It’s these epic visuals that give Aga, an otherwise glacially paced and meditative exercise, its real appeal. Though most viewers might not get access to the title until it inevitably hits streaming platforms, it’s the rare non-blockbuster film these days to demand being seen on as big a screen as possible, as a modest TV or retina MacBook Pro screen fails to convey the true scale of cinematographer Kaloyan Bozhilov’s outsized visuals. This is a quaint, often frustratingly quiet picture that requires the enveloping comfort of larger than life presentation to work its immersive magic.

The film follows Nanook and his wife Sedna (Feodosia Ivanova), a Yakut couple living in northern Siberia. As the film begins, Lazarov matches the movie’s tone and pace to the grating immediacy in their way of life. Scenes purposefully unfold simply and without notable interruption to allow the audience to fully grasp the routine of their day. A different sort of film might truncate the ritual of their lives to offer a shorthand before plucking the hero out of his environs and dropping him elsewhere, but Aga takes considerable time to recalibrate the viewer to “Living In A Yurt And Fishing By Stabbing Ice With A Stick” time.

At first, this is a nauseating proposition. Sitting still and watching Nanook’s way of life slowly and methodically begin to fail him and his wife is a frustrating experience, one made worse by the inevitable fidgeting that comes with such persistently patient storytelling. But over time, as the monotony is broken up by the occasional heartfelt respite of intimacy between the two lovers, there’s poetry in their routine. So isolated from the outside world, the average viewer has no way of knowing what year it is, or without the assistance of a press kit, where in the world this actually is. For all intents and purposes, Nanook and Sedna may as well be the last lovers left alive.

That makes it all the more harrowing when conversations about their daughter Aga who left their way of life behind begin to recur. Circumstances do send Nanook on that fish out of water journey, but it isn’t some charming fable. It’s a tragic and painful experience as he moves from the endless white of his home to the paved roads and ugliness of modernity, in search of his erstwhile progeny. Throughout the film, Nanook seems bewildered at finding dead animals, unaware of what exactly seems to be killing them in these strange ways.

But then the trucker he’s hitchhiking with hits a reindeer and the bluntness with which the animal is dealt with, the awkwardness of his carcass being craned onto the flatbed, creates such stark contrast from the life Nanook has lived. When the trucker makes small talk about how stupid the animal must have been to run in front of his truck, it’s the kind of casual banter anyone might deliver in a movie where a car runs over a woodland creature. But coming near the coda of a story this expansive and peaceful, his words ring so hollow, so vulgar.

Aga’s final act features some of the most profound and disturbing imagery this year, merely by showing audiences their own world at the grotesque and reserved distance of eyes that have yet to acclimate to the industrial nightmares of today. To reach those powerful closing moments requires a patience Lasarov expertly trains the viewer to possess, but it’s an experience that feels tailor made for arguing in defense of the always dying arthouse cinema. It’s doubtful he set out to helm a demo reel for why local movie houses need to stay open, but it sure is a pleasant added bonus.