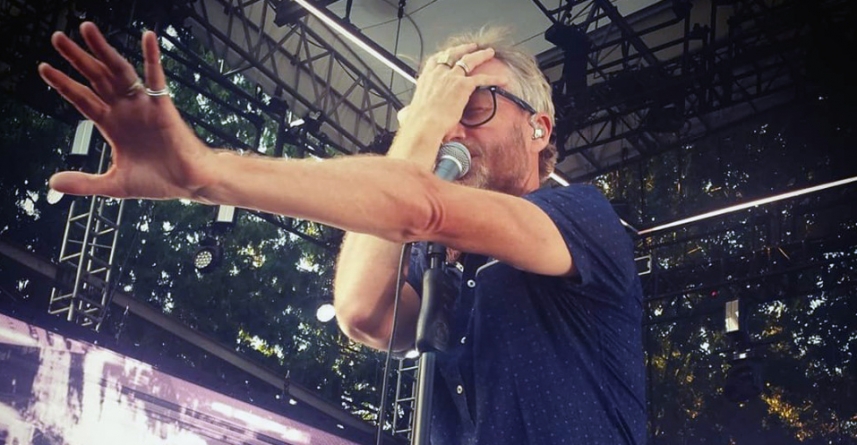 Is there a correlation between how good an album is and the performance on a subsequent tour? Last year, Low released one of its best records in Double Negative, prompting excitement that the veteran band, amplified by an excellent release, would put on one hell of a show. And Alan Sparhawk and Mimi Parker did not disappoint, reinterpreting the new material for the stage and blasting life into older songs. So what happens when a band like the National, beloved for theatrical concerts where audience members sing along to every one of Matt Berninger’s sad lyrics, tours behind I’m Easy to Find, its decidedly weakest record in 15 years? Can the band transcend the doldrums and elevate the songs in the live setting or does the malaise apparent in the recording follow them as they travel the world?

First of all, I’m Easy to Find isn’t a bad album by any means. It’s just that at 16 tracks that clock in over an hour, there is some dead weight. Berninger also uses a rotating cast of female vocalists (including Sharon Van Etten and Lisa Hannigan) on many of the tracks, stepping aside on some to the point where his distinctive baritone is nothing more than a quiet harmony in the background. In his review on Pitchfork, Evan Rytlewski writes that the National has long veered towards the middling adult contemporary pop where U2 and Arcade Fire have landed, but on I’m Easy to Find the band, at times, finally consummates the adjective of “boring” that has long dogged it.

Berninger has evolved as a performer since the National broke through in 2007 with Boxer. Back then, the singer seemed tentative, hugging himself with one arm and barely looking at the audience as he mumbled through his dour songs. Since then, aided with a bottle or two of wine each evening, Berninger has come alive, interacting with fans, leaping into the audience and screaming to the point where his silky voice becomes hoarse. It’s no wonder that the National is a marquee act at summer festivals and mid-sized venues. They quickly sold out Edgefield, leading shut-out fans to social media to beg for tickets at a reasonable price weeks before the concert.

On paper, the evening sounds like a summer dream. The night was clear, the temperatures hovering in the mid-70s as the National played a 25-song set for nearly two and a half hours. Joining the band were vocalists Kate Stables (from This is the Kit) and Hannah Georgas to cover the vocals on the new tracks. Kicking off with new track “Rylan,” Berninger and crew elected to play a song that sounds the most like the National’s traditional sound. The audience erupted in cheers and the concert was underway.

You can’t fault a band for wanting to play new material on a tour. How many times can one sing “Fake Empire” before becoming absolutely sick of it? Yet, the inclusion of 11 songs from I Am Easy to Find made the show drag at times, especially when they piled up on one another. The appearance of “Don’t Swallow the Cap” and “Bloodbuzz Ohio,” five songs in, energized the crowd but at times it appeared Berninger was simply going through the motions even when dragging out old favorites such as “The Geese of Beverly Road.” For every amazing moment such as the emotional punch of “The System Only Dreams in Total Darkness” there was a stultifying one like “Where is Her Head” which played just as poorly live as it does on the record. Berninger interacted with the crowd, tossing cups and ice at us and spitting water on the stage. But at times he seemed tired, especially during first-set-closing “Fake Empire.”

All of that changed during the encore, however, where the National performed a five-song set that redeemed any prior sluggishness. Berninger dedicated the first song, “Not in Kansas,” to the members of Thinking Fellers Union Local 282 in the audience, explaining that parts of the song were taken directly from their “Noble Experiment.” Easily the best track on the new record, “Kansas” finds Berninger binging on Annette Bening, terrified to punch Nazis and quoting R.E.M. in a heartbreaking monologue of fears and failures. The National has only performed the song a handful of times, making its appearance special and heartbreakingly immediate.

After rousing versions of “Mr. November” and “Terrible Love” that saw Berninger walk through the crowd towards the back of the lawn, the band reassembled for the somber “About Today” from their 2004 Cherry Tree EP. The last time they played Edgefield, touring on Trouble Will Find Me, Frightened Rabbit opened. The band dedicated the song to the memory of singer Scott Hutchison who committed suicide last year. Rather than end the show on such a muted note, the National instead opted to do an acoustic sing-along version of “Vanderlyle Crybaby Geeks,” a tactic they used to close shows in the past. Berninger pointed his mike towards the crowd and everyone sang along, creating a closing moment that felt both inclusive and genuine. It will be interesting to see how many I’m Easy to Find songs appear years from now on later tours, but no matter how many times they play classics like “Vanderlyle” with heart, it will never get old.