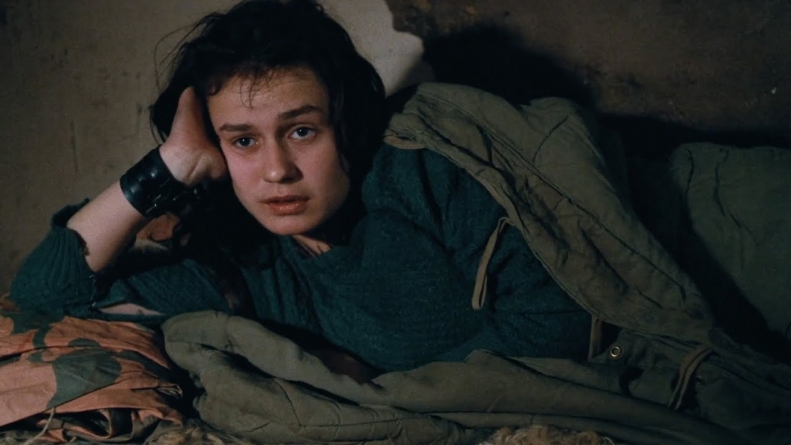 As ever, Varda is no demonstrative formalist, but her visual subtlety constantly reconfigures the tone of scenes and illustrates contrasts.

Like Sunset Boulevard, Vagabond begins at the end. Its idyllic opening shot, gazing at a farm with two trees swaying in the foreground and two more rising at the top of a hill in the distance, communicates a warmth and calm that fractures when the camera suddenly cuts to the frozen corpse of a young woman in a ditch. Discovered by a migrant worker, the body is left for the police, who have no leads and barely any idea of who the woman even is. Only Agnès Varda’s narration, posed as an investigative video journalist, indicates the identity of the deceased, Mona Bergeron (Sandrine Bonnaire).

Befitting Varda’s command of film time, the rest of the film plays out in cross-cuts between flashbacks and present-day docufictional interviews, entwining footage of Mona’s short life with the testimonies of those she came across in her drifting. Varda structures the film like a self-reflexive Citizen Kane, with subjects not only reminiscing about their interactions with Mona but often turning to directly address the camera. As in Orson Welles’ film, the interview style creates a portrait in fragments, each person only able to give brief impressions of the woman. Varda complicates this further by demonstrating how those impressions are colored by perspective.

This is especially true of the men that Varda “interviews,” who tend to focus on Mona’s standoffish, hard nature. In flashbacks, though, we see how Mona, clearly wise to the ways of the world and thick-skinned to its meanness, nonetheless has an affable streak. A truck driver recalls her being a pest who mocked his vehicle, but one can hear the playfulness in her voice when she teases the trucker over his lack of radio, as well as her shrewd rejection of his offer to use his bunk bed. She knows full well what such offers precede, and her swift refusal is strongly suggested to influence his retrospective callousness toward her. Even when Mona does have sex with men in her travels (some for money, others for shelter), men tend to have harsher judgments of her, hostile to her ability to use and discard them in a reversal of norms.

Indeed, as much as the interview subjects make note of bad smell and frosty attitude, one can sense in the moment during her interactions with people just how many envy her willingness to throw off responsibilities for the sake of living life on her own terms. At times, she even bonds with those living their own lives of transience, or those who once sowed their wild oats. The finest example of the latter involves Mona’s brief stay on a farm owned by a middle-aged couple. The man of the house bristles at Mona’s laziness, angry that she sleeps in while the family works all day, but he also has a heart-to-heart with the drifter in which he reflects on his own unmoored youth and his ability to compromise his freedom for his humble present life, a “middle road” as he calls it. It’s a sweet moment, albeit one complicated by the man’s swift return to annoyance at Mona’s idleness and her subsequent departure after swiping a bit of goat cheese to pawn.

As ever, Varda is no demonstrative formalist, but her visual subtlety constantly reconfigures the tone of scenes and illustrates contrasts. The flashback scenes tend to have cooler colors, reflecting the hard physicality of Mona’s existence, while the reflections of the interviewees, however dismissive, are warmer with selective memory. Some scenes contain playful contrasts, particularly when Mona finds empty homes in which to squat. This is especially evident in a scene where she briefly rooms with some biker punks in a large manor that leads to images like a couple in leather jackets and styled hair embracing in a room filled with classical paintings. Mona is rarely given to flights of fancy, but when she does indulge her wistful side the camera often moves in gentle tracking movements, as when she reflects on a pretty, abandoned cottage that catches her eye and the camera cuts to a POV shot looking out of the car in which she is riding to gaze at the humble abode tucked away in a large tract of land.

Vagabond does not shy away from the darker aspects of Mona’s life, whether external threats of rape or her own internal volatility and restlessness that often sees her disrupt tentative friendships for no good reason other than to motivate herself not to form attachments. Mona is not a saintly creature navigating a harsh world but a figure constantly re-evaluating herself and responding to her own wanderlust and external stimuli. When Varda returns to the film’s beginning as Mona’s life comes to an end, the idyllic long shot that opened the film is traded for closer looks at the farm that show its dilapidated state. The revision better fits Mona’s death into her surroundings, gently but sharply reminding the viewer of the precarious state of life that often exists if we bother to look at things just a bit more closely.