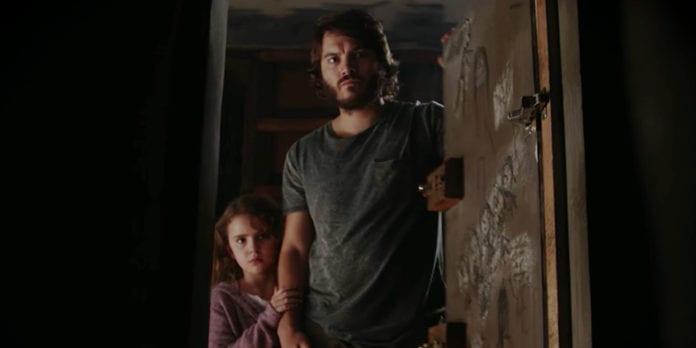 Freaks defies audience expectations at virtually every turn. Opening as an apparent post-apocalyptic survivalist thriller, the film first presents a housebound young girl named Chloe (Lexy Kolker) as hidden away from menacing forces that lurk outside the drawn curtains and crumbling, dilapidated walls of her home. Soon, the warm, affectionate banter between Chloe and her dad (Emile Hirsch) shifts to ominous recitation of a cover story meant to make her sound “normal” should these mysterious outside forces ever breach the pair’s protective bubble. And at this point, Freaks begins to feel like a sociocultural meditation on otherness, with an apparent allegory toward the specter of government raids or even an Anne Frank parallel taking shape.

But then something else shifts, and paranoia swells within Chloe’s dad, who grows increasingly agitated as a seemingly ever-present ice cream truck, managed by the enigmatic and grizzled Mr. Snowcone (Bruce Dern), begins to lure the frozen-dessert-fixated young girl out of hiding, and the viewer begins to suspect that perhaps the film will explore the impact of delusions and mental illness. By the time the time-space continuum grows wonky and people start bleeding from their eyes, it’s clear that almost nothing within Freaks is as it seems.

With co-writers/directors Zach Lipovsky and Adam B. Stein continually pulling the rug out from under viewers, the film could easily veer into a confounding mess. Indeed, it requires a patient viewer, because there are long swaths of time where Lipovsky and Stein keep their cards so close to their vest that Freaks threatens to alienate its audience through its willful opaqueness.

But that’s also part of the film’s intrigue, enticing the viewer forward with periodic breadcrumbs rather than anything overt or expository. Though the film certainly touches upon the theme of a minority group oppressed because of what makes them different, nothing in Freaks is as heavy-handed or preachy as its title may suggest. A heady mix of horror, sci-fi and suspense – along with strong performances form an eminently talented cast – quickly subsumes sociopolitical commentary in favor of mind-bending thrills and a poignant take on familial interconnectedness and the lengths to which we’ll go to protect the ones we love.

While Lipovsky previous helmed B-movie schlock and Stein directed a bevy of TV movies, their collaboration here opens up exciting new possibilities in exploring the darker aspects of modern reality through a lens tinted by the surreal and fantastic. The sheer audacity of melding together such a breadth of disparate tropes is impressive enough, but the fact that Freaks pulls off this juggling act while feeling fresh and original and resisting pastiche propels it into rare air. By keeping the audience off-balance throughout its duration – a crisp, lean runtime for a film that’s so frequently peeling back newer, deeper layers – Freaks asks the viewer to do some heavy lifting to make sense of its frequent shape-shifts. And it rewards those up to the task with an uncommon combination of cerebral thrills and popcorn action.