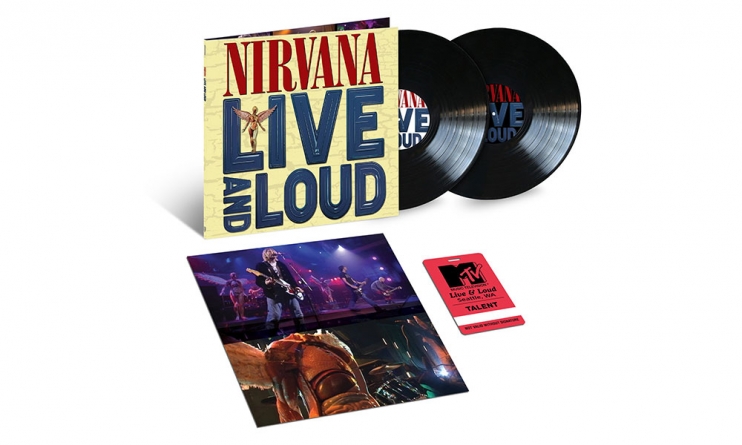 Live and Loud may not be the finest Polaroid of Nirvana as a live act, but it is a worthy one.

On December 13th, 1993, Nirvana headlined a bill that also featured the Breeders and Cypress Hill at Seattle’s Pier 48. Arranged by MTV, the event was also due to feature Pearl Jam, who cancelled at the last minute. Less than four months later, Nirvana would be all over. The concert would be broadcast on New Year’s Eve in a clumsily abridged form, introduced and interspersed with sophomoric skits by Anthony Kiedis and Flea of the Red Hot Chili Peppers—another exhibit in the boom of alternative rock as a viable commodity. In the 25 years since Kurt Cobain’s death, one might argue that conversation about Nirvana has all but shifted away from the music. Live and Loud is the perfect artefact to remind us why they were so revered in the first place.

This doesn’t rank as the definitive document of a Nirvana live performance. Previous posthumous live albums like 2009’s Live at Reading and this past April’s Live at the Paramount both capture the band in a more familiar setting—more importantly, in an actual music venue. The now iconic MTV Unplugged in New York needs no introduction, its intimacy and diversion from the big hits allowing Cobain’s songwriting prowess to be appreciated in a whole new way. It’s also worth mentioning that Live and Loud was already once released in 2013—both on DVD and CD—to commemorate the 20th anniversary of In Utero alongside a remastered version and a wealth of bonus material.

With the announcement of this new double-vinyl package, Live and Loud had already been released on all streaming services and on YouTube (albeit in tedious playlist format). Listening to the album from front to back without the visual aspect really gives a taste of Nirvana as a brand. There is a certain slick professionalism that pervades the record in its efficient transitions and lack of crowd banter. For all of Cobain’s anti-corporate rhetoric and, in some cases, practices, the pace at which songs are executed seem almost automated. It’s difficult to hear how band and crowd feed off of each other.

It’s on hits from Nevermind that you get a real feeling of obligation from the band. While the performances are tight, there is something about the half-hearted delivery on “Come as You Are” and Cobain’s brief chuckle during the last verse on “Lithium” that’s a bit off-putting. It’s no secret that Cobain had little affection for Nevermind, comparing its glossy production to that of a Mötley Crüe record, and had long since all but completely stopped playing the notably absent “Smells Like Teen Spirit.” One can’t help but get the feeling that the group was at times just going through the motions.

At other times, however, you can tell the band is playing like they mean it. In Utero tracks “Radio Friendly Unit Shifter” and “Scentless Apprentice” (the latter previously released on 1996 live compilation From the Muddy Banks of the Wishkah) practically stink of piss and vinegar. “Breed” opens with the scree and fire of Cobain’s overcharged amplifier and the thundering rhythm section of Dave Grohl and Krist Novoselic come through with full force. Most important of all is ex-Germs guitarist Pat Smear’s input. Cobain had been known to say that Nirvana was always meant to be a two-guitar band and Smear’s guitar—at times audibly louder than Cobain’s—really beefs up tracks like “Breed” and “Drain You.”

The band doesn’t so much go out with a bang as they do come apart at the seams on Live and Loud. “Come as You Are,” “Lithium” and “About a Girl,” three of the mellower numbers in the band’s catalogue, are odd choices. You’d wonder if they were included because the band felt there was a need for some decorum, or if, again, they were trying to send the MTV seat-fillers home happy. Conversely, rambling avant-noise piece “Endless, Nameless” brings a delightfully raucous close to the proceedings.

We all know what fate would befall the band mere months later. Cobain’s drawling “And I swear that I don’t have a gun/ No I don’t have a gun” on “Come as You Are” is now completely flinch-inducing. In any case, Live and Loud may not be the finest Polaroid of Nirvana as a live act, but it is a worthy one.

Danny currently lives, works and writes in Dublin, Ireland. You can find him on Twitter at @dnnyklmrtn