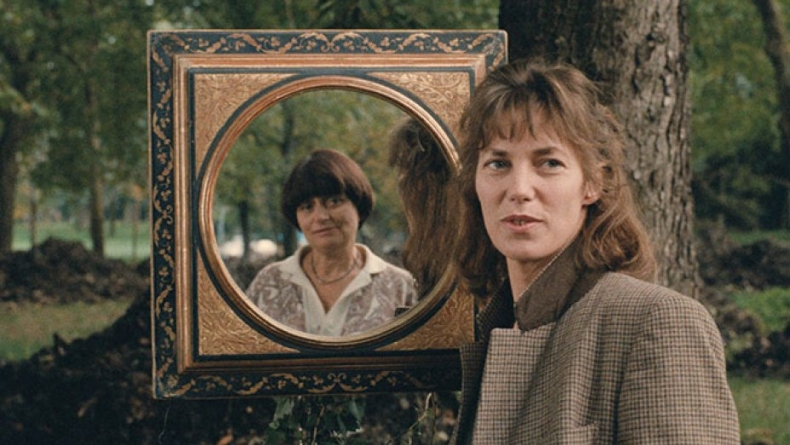 Varda is innately interested in digging into the aesthetic issue of beauty from a woman’s perspective.

Agnès Varda’s Vagabond ends with its itinerant heroine drained of all life, energy and warmth, homeless and defeated, freezing to death in a ditch. Abandoning a drab bourgeois existence for one of untrammeled liberty, she finds that freedom from commitment also leaves one vulnerable to the rough edges of society, with no one to help when things get truly dire. Pivoting from this uncharacteristically dark position, Varda follows that film’s nightmare of feminist despair with an opposing vision, a waking dream in which transgression is rewarded, albeit with nothing resembling a perfect outcome. Instead, all manners of messiness are embraced in Jane B. by Agnès V., an intimate docu-portrait of the actress Jane Birkin, in which home, family and relationships remain primary concerns.

The movie orbits around Birkin’s cozy Parisian manse, a place packed with a dense detritus of knick-knacks and sentimental objects, some of which get their stories explained. The chockablock design seems to inspire that of the film, which Varda constructs in response to her friend’s anxieties about turning 40, holding up a mirror to all that’s balanced and beautiful about her life. The director does so literally in one scene, commenting that “I’m shooting your self-portrait,” a phrase which acknowledges the surrender of control implicit in taking part in someone else’s story, even if it is a rendering of your own. Nesting this notion within a broader commentary on the aesthetic demands routinely placed upon women as objects of desire, Varda installs Birkin within a series of fantasy scenarios, allowing her to play a wide variety of parts while offering simultaneous transparency into the ideas and inspiration behind them.

Jane B. was released nearly in tandem with Kung Fu Master, a paired Varda/Birkin collaboration whose tone and approach is entirely different, but which shares the same central concerns as its sibling. Both imagine aging as a process of self-becoming that also involves a concomitant element of loss. That film, in which Birkin portrays a version of herself embarking on an ill-advised affair with a 15-year-old boy, plays out like one of this film’s illustrative reveries writ large. Here, the presentation is much more diverse but no less incisive, assembling a wide-ranging characterization in which the performative space holds the same function as dreams, reconfiguring and recontextualizing adjacent real-life issues.

The scenarios pop out tangentially, peeling off from phrases or ideas expressed in the documentary segments, then linking back up to others which continue the thread. Some are encapsulated shorts in which the fourth wall remains intact, while others never install it in the first place. A flamenco fantasia leads Birkin to open up about her distaste for the costume she’s wearing, resulting in a monologue about roles she’ll never play. In another scene, the search for a wad of cash misplaced by an artist boyfriend—one of many finance-focused set pieces—approaches actual drama while being persistently undermined by the hideous crush of his huge, ridiculous sculptures, masculine overkill made hilariously manifest. Trips to a hidden vineyard in Montmartre and idylls in London, North Africa and the Wild West further accentuate the sinuous layering of the real and imaginary, truth and coyly presented artifice coiled comfortably together.

The most revealing moments, however, tend to occur within Birkin’s home itself, its stone-walled garden tucked away from the world, the sanctity of this place only gently violated by Varda’s benevolent, empathetic camera. The inverse of these instances are the sparsely appointed tableaux in which Birkin faces that camera full-on, owning up to her shyness, only sporadically surrendering to its scrutiny with anything resembling comfort. As in Jean-Luc Godard’s Passion], released a few years prior, these living arts scenes serve a dual purpose of intensifying individual isolation, while also offering a different context for performance, one in which the act of viewing is duplicated within the film itself.

Unlike Godard, Varda is innately interested in digging into the aesthetic issue of beauty from a woman’s perspective. Charting one woman’s changing relationship with the camera’s stare Jane B. by Agnès V. provides a welcome corrective, expressing the inherent tension between being beguiled by the loving nature of that gaze, while also feeling distress at its fickle, limiting nature. Throughout this, Birkin remains an aesthetic object—toyed with and trouped through one costume change after another—but one free to set the terms of her own objectification, a willing participant in the swirling pageantry of a life lived under the microscope.