Henri-Georges Clouzot never cared about destroying his protagonists. In the twin pinnacles of his cinematic triumphs – The Wages of Fear (1953) and Les Diaboliques (1955) – the French director ripped apart the psyche of his main characters whether they were grifters driving explosive nitroglycerin through the knotty roads of a South American jungle in the former or a meek schoolmarm with a frail constitution reeling from the drowning death (and subsequent disappearance) of her husband in the latter. For La vérité (1960), Clouzot filmed a taut courtroom thriller about a young woman with loose morals (Brigitte Bardot), on trial for the murder of her lover, and how the judgment of a staid French society led her to ruin.

Rather than a straightforward procedural where the defendant is either innocent or guilty, Clouzot is actually placing his countrymen under the microscope. Just take one look at exactly who is hearing the case: old white men dressed in suits, sentinels of a French society that still looks down on women who don’t adhere to the traditional standards of morality they wish to preserve. We know right from the get-go that Bardot’s character doesn’t stand a chance. 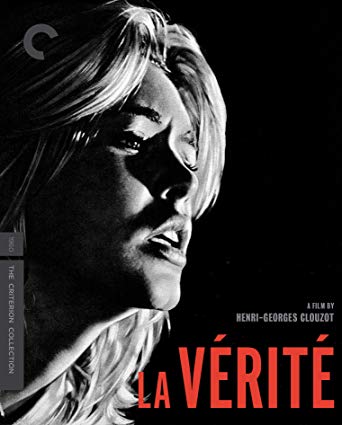 The story itself is inconsequential. Dominique (Bardot) is a troubled young woman who finds her place in Paris’ café culture in the burgeoning Beat scene of the late ‘50s, rubbing shoulders with poets and musicians, having one-night stands and living hand to mouth, much to the chagrin of her older, more responsible, classically trained musician sister, from whom she steals conductor Gilbert (Sami Frey). While figuring out exactly why Dominique murdered Gilbert is integral to the plot, Clouzot is more interested in looking at the misogyny that fills the court and French society, and how Dominque is guilty no matter what.

In 1960, there might not have been anyone more famous in France than Bardot. Hounded constantly by reporters and living under the constant scrutiny of the public eye, Bardot could not maintain a private life. Each of her relationships became part of the public domain, and she was constantly judged, most notoriously for her short marriage to actor Jacques Charrier, which yielded a son. Unable to care for him, Bardot gave up custody, outraging her fans.

Clouzot based some of the film on the details of Bardot’s life while she was still married to Charrier. Outraged, her husband tried to stop the film from being made. As they made La vérité, Bardot and Charrier split and she began an affair with co-star Frey. Meanwhile, her secretary published private details about her life in a tabloid. All of this proved too much for Bardot and a few weeks before the film premiered in 1960, she attempted suicide. Of course, some pundits believed this act was a publicity stunt.

There is a synchronicity between Dominique and Bardot, and Clouzot, no fool, capitalized on the drama to make Le vérité richer and more truthful. Despite the film’s progressive politics, Clouzot was no prince towards his leading lady. In an attempt to elicit a stronger emotional response to a scene, the director notoriously smacked his star across the face. Legend has it, Bardot, no pushover, immediately smacked him back, putting an end to that dynamic.

Clouzot interlaces flashback into the courtroom scenes of his movie, creating a full portrait of an uncompromising female character who suffers under the choking restraint of society. It is okay for men to sleep with multiple partners, yet a woman who does so is a “whore,” according to the men who want to impose the death penalty on Dominique.

A critical success upon its release, La verité would be the final triumph for Clouzot, an eventual victim of the French New Wave. As a member of Truffaut’s “tradition of quality,” Clouzot fell out of favor with cinema fans looking for something new. He only completed one more film and suffered from ill health until his death in 1977. Yet, Le vérité (and many other Clouzot’s films) enjoyed a critical rebirth. Bardot called her collaboration with the director her best film and despite its age, the inherent message of La vérité – the implicit collusion between a strait-laced society and a hardened legal system – is sadly still sharply valid so many decades later.