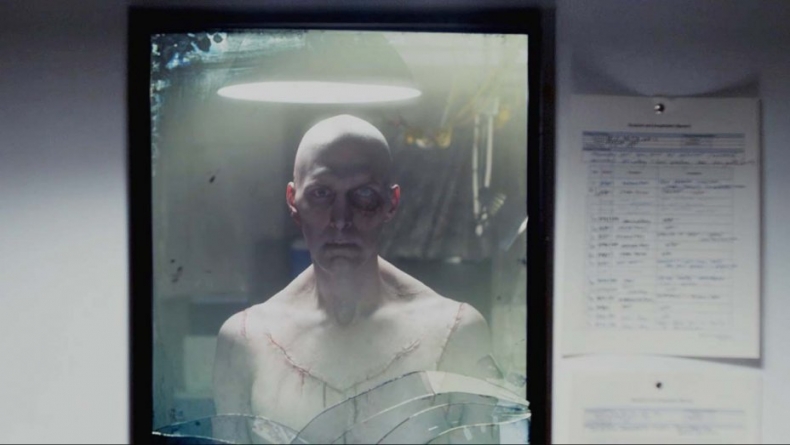 We need a new take on Frankenstein like we need a bolt in the neck, but that didn’t stop Larry Fessenden from gleefully indulging in a modern spin on one of fiction’s most iconic monsters. The writer-director and character actor—who’s making his second foray this year into reanimation after playing one of Jim Jarmusch’s zombies in The Dead Don’t Die—wrote the script for Depraved in the mid-aughts but couldn’t get it made until he retreated to his own lab, ultimately releasing this passion project through his indie studio, Glass Eye Pix. That DIY approach is not only fitting for the film’s grisly motif, but also allows Fessenden the creative control to experiment with trippy, monster-vision POV when he’s not somewhat heavy-handedly exploring themes of how war and greed can make monsters of men.

Improbably, Fessenden takes material that hews closely to Mary Shelley’s classic and breathes new life into it, making a relatively compelling, if a bit warmed-over monster movie that both touches upon 21st century social commentary and preserves the original story’s main thematic beats. This creature, called Adam (Alex Breaux), may be made up of disparate body parts, but he is nevertheless not an amalgam of tropes. Fessenden made no effort to mask his monster’s obvious Frankenstein influence. The stylized film poster goes so far as to directly mimic one for the Boris Karloff classic, a film that is even namedropped directly at one point.

Depraved humanizes the creature from the outset, introducing us first to the brain that will become Adam’s. It’s the birthday of Brooklyn hipster Alex (Owen Campbell), who squabbles about commitment with his girlfriend, Lucy (Chloë Levine), and storms off into the night only to get stabbed repeatedly in the stomach by a shadowy stranger. Lingering memories hazily ebb and flow when Alex’s brain shakes the cobwebs loose within Adam’s skull, the sewn-together man awakening in the loft of rogue doctor Henry (David Call), an Iraq War vet who used the bloody carnage of IED-rife combat to earn his mad scientist stripes before returning to civilian life. Shocked that his experiment worked, Henry treats Adam like a child. He teaches him rudimentary skills and soon uses him as a surprisingly adept ping-pong opponent. He also pumps him full of human growth hormone to make him stronger, which perhaps seems like a bad idea.

The film grows a bit cartoonish when Henry takes an oddly dude-bro attitude toward Adam, using him as someone to hang out with rather than conduct experiments on. He gets oddly impatient with his creation, even as Adam acquires new skills with exponential speed. Henry, along with his insufferably smug colleague and financier, Polidori (Joshua Leonard), debate how best to capitalize on this abomination against nature, while managing to literally get away with murder (and a little body snatching) without any threat of pursuit. The motivations of these douchey docs never seem especially plausible, but that’s compensated for by Adam, who’s empathetic in his unnatural naivety and his occasional flashbacks to wistful memories of Lucy. He’s a sympathetic creature forced into an impossible situation that he gradually, and painfully, begins to understand. When a moment of frenzied violence inevitably occurs, the greatest tragedy is the loneliness and desperation that drove him to such ends.