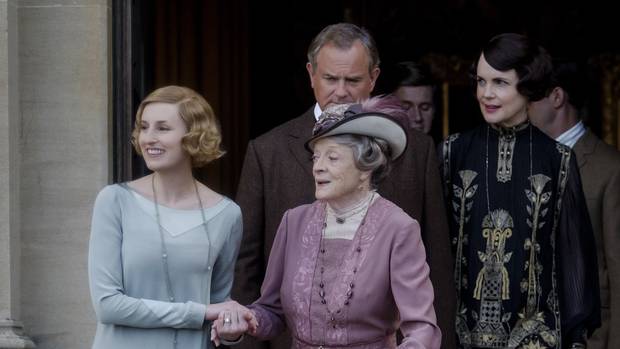 The film version of Downton Abbey doesn’t necessarily surpass the television series, but fits smoothly, supplementing the original’s arc without undermining it.

For fans of television’s “Downton Abbey,” the British phenomenon which ran for six seasons and concluded, gracefully, four years ago, the film continuation will be absolute perfection. This new, shinier, but familiar Downton Abbey features many of the characters that the show nurtured and tortured over the years and puts them into the most hallowed of English situations: a visit from the royal family. Those who did not watch the show shouldn’t stay away: Downton Abbey tells a complete, dramatic and frequently hilarious story that will appeal particularly to lovers of history, period fashion and English comedy.

Julian Fellowes, the Oscar-winning screenwriter of Gosford Park and creator of the television series, is back for this new entry, and it shows in both the quality of Lady Violet’s one-liners (which, as delivered by the legendary Maggie Smith, provide some of the year’s best comedy) and in the sharpness of the story, which, like Gosford’s, revolves around a few short days but that proves itself to be layered and surprisingly poignant. Veteran theater and television director Michael Engler, in just his second feature film, does well to lean into what made the show so great. He does, however, make some pleasant additions. Namely, he shows us Downton’s gorgeous exterior in a variety of lights and weather patterns, something the show rarely did, and takes the characters outside as well. When Lady Mary (Michelle Dockery, luminous) is forced to go outside and perform manual labor in the rain or run-down cobblestone streets in her clunky ‘20s footwear, it serves to expand Downton’s world ever-so-slightly beyond the estate’s walls. It’s also a benefit to have a queer director handling things, as one of the film’s major subplots follows the dynamic trajectory of the closeted Mr. Barrow (Robert James-Collier), a character who the television series alternately tortured or villainized. James-Collier, who had an assortment of memorable moments in the show, is quietly stunning in the film version of his role, showing a man becoming comfortable in his own skin during time when he wasn’t allowed to be himself.

The plot follows the residents of Downton Abbey as they prepare for the visit of King George V (Simon Jones) and Queen Mary (Geraldine James). The lords and ladies of the manor are quietly excited and quickly set out to choose the correct outfits and guest lists for the occasion, while the servants downstairs are, for the most part, beside themselves with excitement over the chance to serve royalty. The scenario is a bit more frivolous than most of the television’s series main plotlines, which involved war, rape, murder, tragic deaths, poverty and more than a few stabs in the back. But that suits the film well, as not only have these characters suffered enough, but they’ve always been at their best in their most quiet moments. When Mary says to maid Anna (Joanna Froggatt), “you’ve always been a good friend to me” and Anna responds, “I hope we’re good friends to each other,” the emotion that the two actresses bring to this outwardly simple exchange transcends class. And when the ever-feisty Mrs. Patmore (Lesley Nicol) and the even-feistier Daisy (Sophie McShera) buy provisions for the royal dinner from local shop-owner Mr. Bakewell (Mark Addy), both the comedy and humanity on display are subtle and affecting.

Ultimately, it’s the little moments like these that weave together into something that does indeed feel like a whole movie rather than pure fan service or an unnecessary coda. It is isn’t exactly an underrepresented time or place for cinema to approach, but these characters are wonderful creations and watching them operate with one another and with history is very rewarding. Even the smallest characters get to shine. One of them, Mr. Molesley (Kevin Doyle), gets the best scene in the entire film.

The film version ofDownton Abbey doesn’t necessarily surpass the television series, but fits smoothly, supplementing the original’s arc without undermining it. It also manages to tell a relative standalone story that doesn’t feel superfluous, and though the two-hour runtime lags at parts, the film is admirably unbloated. Not every plotline works perfectly, but by keeping all of these subplots housed under one royal visit there is nothing that feels tacked on. The highlights are obvious: the house and costumes are stunning, the class warfare is suitably pronounced and Maggie Smith returning to one of television’s best characters is a gift we don’t deserve. Downton Abbey is the rare return trip that’s worth taking.