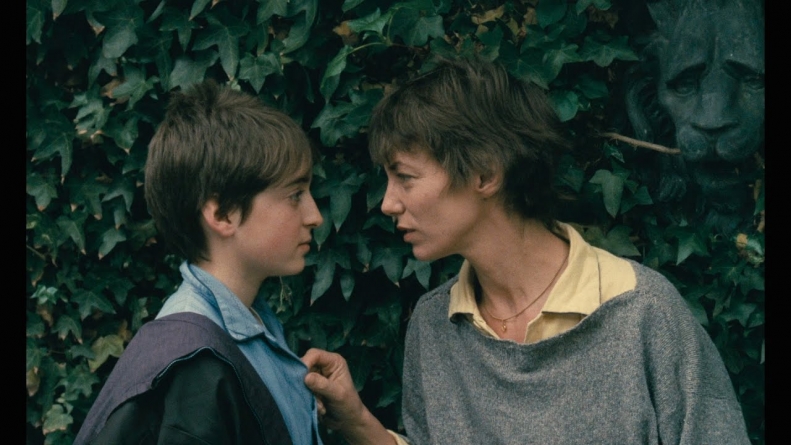 Kung-Fu Master transgresses in the gentlest manner possible, while also tossing off frequent barbs at the libertine romantic expansiveness of French cinematic culture.

With Jane B. by Agnès V., Agnès Varda contemplated the emotional complexities of aging, paying particular attention to how this process affects a person in the public eye, their reputation dependent on maintaining value as an aesthetic object. In a fine example of inter-oeuvre synchronicity, Kung-Fu Master further develops this point, burnishing a nugget of an idea from the previous film, maintaining the same core concerns while telling an entirely different story in the process. Charting the doomed, ill-advised relationship between the middle-aged Mary-Jane (Janie Birkin) and 15-year old Julien (Varda’s own son Mathieu Demy), it fully foregrounds the feminine perspective while also considering its opposite, establishing adolescent insecurity as a paired value on the same sentimental continuum.

Kung-Fu Master kicks off with the young Julien talking tough at a backyard birthday party for Mary-Jane’s daughter Lucy (Charlotte Gainsbourg), quaffing one swig of booze after another, before playing a prank with a condom repurposed as a water balloon. The charade then just as suddenly blows up in his face, the failed attempt at playing adult leaving him collapsed on the bathroom floor, too drunk to stand up. This image – a boy, small for his age, looking singularly pathetic slumped in front of the toilet – was noted as the film’s germinal moment in Jane B. by Agnès V., in a scene which discussed the inherently maternal roots of the liaison. Appearing from her bedroom, Mary-Jane takes pity on Julien by helping him to vomit, a humane gesture that establishes their relationship, while also emphasizing its uncomfortable mother-son associations. Presented as an unhealthy fixation on the part of both parties, the characterization of this entanglement still leaves room for an empathetic depiction of the emotions that fuel such an affair.

Key to this portrayal is the fact that it’s less a passionate romance than a bout of twinned obsession; for Mary-Jane, the object of affection is only nominally Julien himself. More significant is the aura of youth he represents, particularly its quavering, unformed inconstancy. The attraction is further enhanced by the allure of revisiting the chaste hesitancy of the early adolescent relationship, where sex is still secondary to awkward displays of tenderness, and gender roles are not as forcibly demarcated. For Julien, the enticement is mostly found in stealing kisses from a woman more than twice his age, but also in the new gratification of being admired on an aesthetic basis, a sensation Varda’s related work often reminds us has its own built-in downsides.

Mary-Jane turns out to have had her own experience in this regard, as she tellingly recounts in a smart scene pitched as an embarrassing bit of mother-daughter oversharing. She describes being in Julien’s shoes herself as a teen, carrying out an extended dalliance with an obsessed middle-aged man, one which never developed beyond fumbling flirtation. This revelation could be seen as a dark moment, especially in today’s more conscious climate, another instance of abuse passing its way down through repetitive, inter-generational cycles. Yet while some element of inappropriateness is clearly intended, Varda also doesn’t expect either relationship to be seen as wholly abusive or perverse, the imbalanced nature of such longing pointing both to particular personal deficiencies, and the intrinsic power imbalances that manifest themselves in every corner of society.

Spinning a tale of austere affection involving an adolescent and a woman who both wishes to mother and become him, Kung-Fu Master transgresses in the gentlest manner possible, while also tossing off frequent barbs at the libertine romantic expansiveness of French cinematic culture. That the bond between the two even verges toward the sexual is presented less as an indictment of Birkin’s character than one of the society she inhabits, in which male-female relations can only be imagined within the narrowest of circumscribed social definitions.

Such tension is further drawn out by the film’s most persistent motif, as the repetition of references to the mounting AIDS crisis creates a consistent background murmur. These mentions serve a variety of functions, most potently as a reminder of the dangers of adult love, present for Jane’s character and looming on the horizon for the adolescents, making the whole enterprise seem even more daunting. They also raise the question of how a society continues to function when its primary outlet of romantic connection has been marked as possibly fatal, an even more pressing issue considering the death of Varda’s husband Jacques Demy from the disease two years later. The early scene of Mary-Jane gently forcing her fingers down Julien’s throat, meanwhile, is later matched by TV news footage of a condom being tested with a similar grasp, the promise of a genuine, sympathetic connection between two people twisted into something antiseptic and ugly.

A world where sex can kill thus gives rise to a relationship founded on diverging lines of desire, in which the two parties wanting opposite things from one another assures that nothing can come of it, a fact which provides its own form of emotional insulation. Just as Mary-Jane employs Julien as a shield against the oncoming uncertainty of middle age, he scours her for object lessons in how to become a man, a process that’s depicted as a shedding of personal idiosyncrasy in favor of the sanded-down conformity of ingrained gender roles. Picking up bad affectations and worse habits, Julien strains to define himself as a figure who’ll inspire admiration rather than pity. Finally beating the titular video game, he gradually turns hard, as other adults catch wind of the affair and sever the two forever. Mary-Jane will not be forgotten, but she will not be left pure either, the memory of their liaison quickly converted to kindling for the nascent fires of manhood.