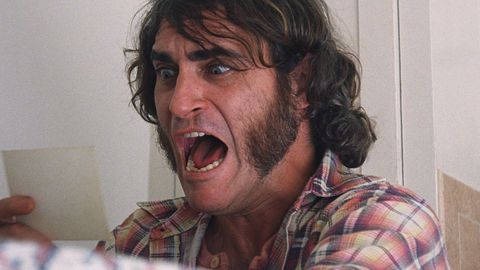 A more than hilarious commentary on the we’re-absolutely-fucked-ness of US society.

The internet loves lists, even though they are inherently fraught exercises. As much as we love a good online list, we most love getting to dismantle them with our critiques. It is no surprise, then, that when IndieWire released their 100 Best Movies of the Decade list two months ago, they generated a substantial amount of conversation. Film Twitter had a couple of field days criticizing omissions and out-of-place rankings—no Once Upon a Time in Anatolia was a glaring fuck-up—and then moved on. Such is the lifecycle of an internet list. More telling than IndieWire’s perfectly-fine-yet-inevitably-flawed list were the films that did not find online champions. One such film is Inherent Vice, ranking number 100, which feels something like the very definition of criminally underrated.

Even on a surface level, Inherent Vice seems like it was destined to be the sort of film people will still be watching 100 years from now: the greatest filmmaker of his generation (Paul Thomas Anderson) adapting a novel from one of the most enigmatic and accomplished writers of the past 100 years (Thomas Pynchon) with a cast super-saturated with A-list Hollywood stars (Joaquin Phoenix, Reese Witherspoon, Josh Brolin, Owen Wilson, Martin Short and Benicio del Toro!) set in the most iconic and photogenic city in the US (Los Angeles, duh!) and at the very moment the country was transitioning from the free love ‘60s to the self-loathing ‘70s. Then the movie starts with the best possible first scene/inciting incident any movie can have: the femme fatale saunters into the presence of the down-and-out gumshoe and offers a barely-defined potentially dangerous investigative job. The gumshoe agrees to do it against his better judgement, urged into bravery through abuse of his substance of choice. PTA may as well have titled it The Movies: Based on the Novel by Pynchon!

Phoenix plays the private investigator, Doc Sportello. Doc finds himself plunged into overlapping conspiracies so convoluted and improbable that they are just as likely the product of his marijuana-infested imagination as they are really happening. Even Doc knows this, as he once writes “Paranoia” on his notepad while interviewing a lead. Inherent Vice is so deeply hilarious that it is easy to miss that it is also one of the more poignant commentaries on the basic absurdity and rank stupidity of daily US-American life. Anderson vivifies Pynchon’s cutting prose through a quite literal interpretation of the latter’s batshit-insane novel, and it works. Only in the US after the rise of Cold War hysteria could one even conceive of a plot combining a real estate mogul, neo-Nazis motorcyclists, a violent cop/wannabe movie star, a massage parlor/brothel/drug front, a cartel/dental practice, a surf-rock saxophonist-cum-law enforcement informant, right-wing assholes, a mysterious ship rumored to be smuggling Indochinese heroin, and the missing ex-girlfriend of a burnout hippie private dick. And only Anderson would dare to try to film the damn thing.

Inherent Vice is a more than hilarious commentary on the we’re-absolutely-fucked-ness of US society. It is gorgeous. Anderson is not only the best filmmaker to emerge in the past 30 years, but he is also the best there is at capturing southern California in a camera lens. The beaches, diners, house parties and back alleys of L.A. haven’t looked this good since…Punch-Drunk Love, by Paul Thomas Anderson. Readers of Pynchon’s novel will appreciate the visualization of the textures, spaces and bodies in the film; perhaps only the Coens’ with their adaptation of No Country for Old Men so expertly capture the spirit and visual stylings of the author they are borrowing their story from. Pynchon’s book is sexy and the women in it who lust after Sportello are even sexier, yet Anderson replicates that with the film. His Los Angeles feels plucked straight out of the ‘70s and shoved into our living room here in the new millennium, with a patina of sun-saturation goldenness to cover up the black heart of it all.

Inherent Vice is like a lot of films. The readiest comparison is The Long Goodbye, though it has a spiritual kinship more with The Big Lebowski and its political jabs echo Chinatown more than anything else. Much like this year’s Under the Silver Lake, it is a paean to Los Angeles and to movies, a goofy, drug-hazed noir that barely makes sense and is constantly funny. How that sort of film, with these kind of names behind it, is only the 100th best film of any decade is a mystery only IndieWire can solve.