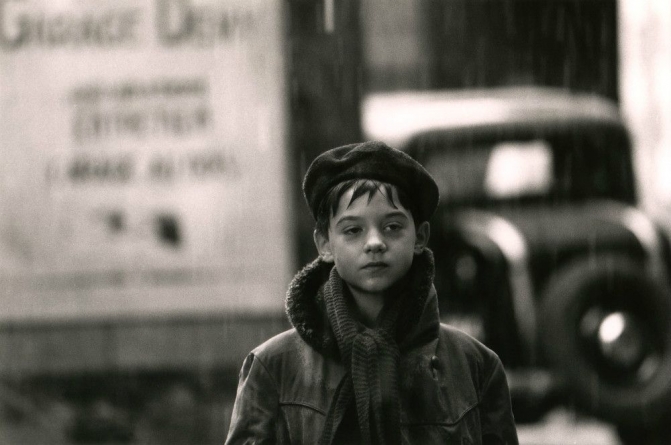 Varda’s staging of the story stands out as a vivid act of compassion, as well as an occasion for further experimentation with recurring stylistic themes.

In Jane B. by Agnès V., Agnès Varda floated the idea of autobiography as filmed by another person, a collaborative project in which the content of a life is reinterpreted via an external point of view. Jacquot de Nantes extends this concept under different circumstances, with the intimate details of her husband’s childhood funneled into another broadly arrayed fantasia, proceeding in a largely linear fashion while also toying with perspective and progression. Released months after Jacques Demy’s death from AIDS complications, the film functions as another celebration of a life, in this case at its end rather than its midpoint. It’s the kind of memoir movie the director might have made about himself had he the time to do so, and Varda’s staging of the story stands out as a vivid act of compassion, as well as an occasion for further experimentation with recurring stylistic themes.

This is achieved by delving into Demy’s memories, transforming them into images, a process that results in a composite portrait of the artist as a young man. Jacquot starts off at his father’s auto body shop at the end of the 1930s, amid an idyllic life full of oddball characters and exhilarating incidents. This setting serves as the cradle for Demy’s creative development, which gets charted across small artistic awakenings, moments of magic forming the impetus for a steady accretion of new tools and skills. As the boy grows, one useful toy is traded up for another, play transforming into work, with little difference designated between the two. Meanwhile, as Demy is flourishing, France is floundering, as fascism looms and German forces occupy the country.

This occupation sets up a second phase, in which the boundless possibility of childhood gives way to the socialized strictures of adolescence, a period where boundaries are set and personalities are fixed. Such a period is significant in Varda’s films – as seen in the previous Kung-Fu Master – which charts the ease with which a gentle, open-minded teen can easily stumble into the pitfalls of unthinking, ossified masculinity. The version of Demy depicted here does the opposite, continuing to press for the personal sovereignty to tinker with his own fanciful creations, even as his otherwise understanding father enrolls him in technical school and tries to force him to take up the family business. Above this authority figure sit the far-more-oppressive Nazi occupiers, attempting to put an entire country under their heel, this autonomy-squelching imposition acting as the ultimate form of creative suffocation.

Varda’s patient, considerate approach sits at the opposite end of the spectrum, creating in collaboration, feeding off the unique energy of its subject. Her affection for her husband is obvious, shooting him in a cozy domestic setting similar to that of Birkin in the previous portrait. At times the camera simply traces over his body, as if trying to map and incorporate all of his features, cinema serving as a vessel for the preservation of memory, both in this immediate setting and the collection and dispensation of Demy’s own foundational experiences. Jacquot de Nantes therefore ends up as a sort of collage, as the director observes her subject‘s recollection of past events, then enfolds the reenactment of those moments into her own composition. Past scenes are shot in black and white, except for when a burst of inspiration occurs and the entire film flashes into color, vivifying the jolting dynamism of the creative process.

Eventually giving in to the intractable pull of loss, Varda surrenders her husband at the film’s conclusion, leaving off just as he enters film school, having persuaded his father to let him follow his cinematic dreams. The narrative is thus severed at a moment of boundless possibility, a perpetual becoming for the fictionalized Jacquot. As for the real one, we already know how his fantasies came to fruition, a reality dramatized by frequent cutaways connecting certain memorable images with the content they will eventually inspire. Jacquot de Nantes ends for good at the beach, a common location in Varda’s filmography, a place of unending transition that always ends up looking familiar. Demy’s life has been washed away, as all eventually will, yet something substantial remains behind, an exquisite document that’s also a visual symbol for the enduring power of remembrance.