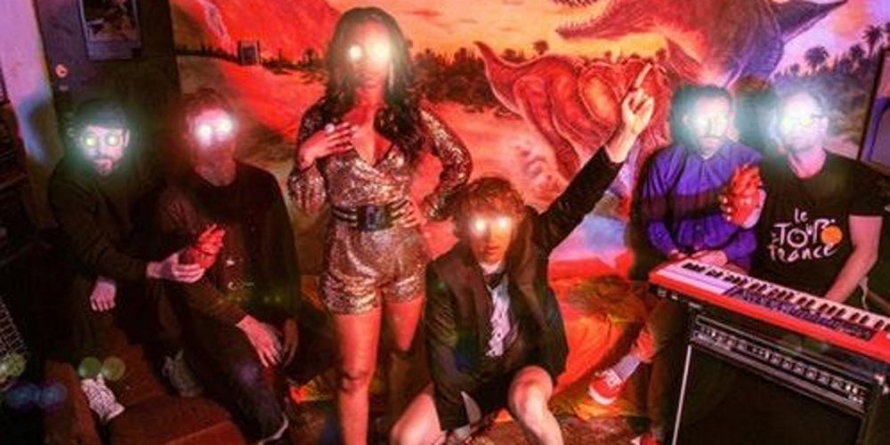 Even if the band doesn’t sound as sharp and vibrant as they once did, !!! are still wicked fun.

!!! shows are largely worth that extra cup of coffee you might need the next day. Any excuse for New York-based dance punks to play a show is a good excuse, making their show at Mississippi Studios (a surprisingly “adult” venue for the band) a must-see. They even sweetened the deal with local R&B demigod Chanti Darling, a welcome sight on any stage. With a voice like an angel and a preternatural ability to produce fantastic and dense layers of beats and vocal samples behind him, it was easy to get lost in the music – but only so easy, as the dancefloor was shockingly empty during his performance. Everyone else’s loss.

It filled up for !!!, though, which is good because a packed house is vital for the optimal experience. Within one song of the band being onstage, frontperson Nic Offer had established his dominance over not just the front row – he makes his home on the edge of the stage, singing directly into the faces of as many people in the crowd as possible – but Mississippi’s rope barrier, which the front row was tasked with disabling to make it easier for him to come into the crowd. He’d do that frequently, either to sing directly at people or to just dance amongst the crowd.

!!! is a group effort, but the heart and soul of it is unquestionably Offer, who’s stage presence is unmatched by most other performers. At 47 years old, he doesn’t have the same unhinged energy he once did, but he’s still got more than enough fire to take their brand of dance punk to an entirely different level. The Girls Can Tell-printed short shorts he’s frequently dressed in took a backseat to a three-piece outfit of a thin blazer, a tee-shirt, and those damn short shorts, all in matching, seemingly hand-done plaid. It gave him something of an Angus Young vibe, though he uses that vibe in a totally different way. His energy is anchored by the incomparable Shannon Funchess, his backup singer, dressed in a shimmering silver dress and displaying a remarkable amount of command for someone in such a volatile group. She’s nowhere near as engaging, but she’s enough of a powerhouse that it doesn’t matter.

After 20 years, though, they don’t have the same zeal they once did. This is expected: they’ve been performing high-energy music for long enough that this energy waning can be forgiven. But without Offer playing hype man to his own band, it feels like it would be hard to engage with the band at this point, who are touring behind noticeably lackluster material. Worse still, they seem to be avoiding any of their beloved material, outside of the still-perfect “Slyd,” in favor of weaker, latter-day songs from As If and Shake the Shudder. At best this is a disappointment, but at worst it feels like a waste of their power.

This isn’t to say that the rest of the crowd cared, though, who spent the whole show in dance mode. Even if the material isn’t as good as you’d like, and even if the band doesn’t sound as sharp and vibrant as they once did, !!! are still wicked fun to dance along to. If you can ignore the fact that they might skip “Must Be the Moon” or “One Girl/One Boy,” or even “Even When the Water’s Cold,” they’re still going to show you a very fun time. For those who want a little more than to just dance, though, it may be worth it to wait and see if the next album is worth dancing to – or worth the next day’s exhaustion.