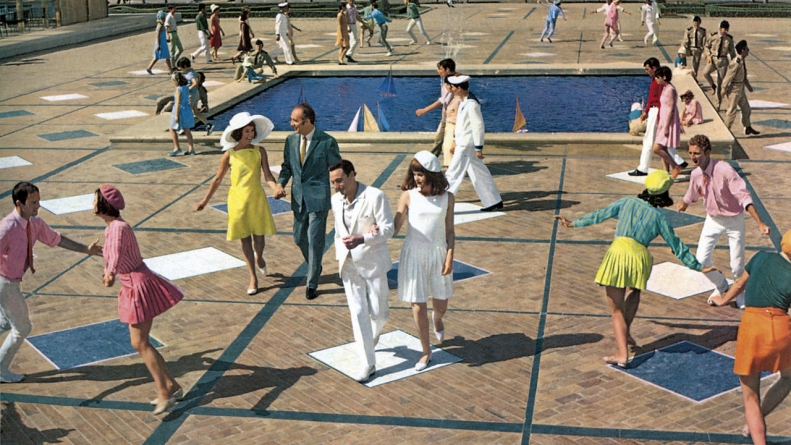 Who can blame Varda for pretending, in 1991 only months after her husband’s death, that she could return to the wondrous summer of 1966 using that same movie magic?

To write about The Young Girls Turn 25 in 2019 as part of a long-running and exhaustive retrospective on the film oeuvre of Agnés Varda is to do precisely what that film was doing: celebrating a filmmaker just months after his/her death. Varda made The Young Girls Turn 25 just months after her husband, Jacques Demy, the director of The Young Girls of Rochefort, died in 1990. It was a paean to her late spouse as much as it was a retrospective on his signature film. In a very meta way, Spectrum Culture’s ongoing Oeuvre series on Varda, coming just months after her death, is much the same: a revisiting of her delightful films as a way of paying tribute to her as a person and artist.

The premise of The Young Girls Turn 25 is that, in 1991, the small French town of Rochefort is holding a festival to memorialize the 25th anniversary of Demy’s making of The Young Girls of Rochefort, which is one of the most exciting and famous things to ever take place in the town. As part of the festivities, the city has invited Varda to return and she has decided to make a documentary about the event.

This is a very personal film for Varda, so much like its immediate predecessor in her filmmaking catalog, Jacquot de Nantes in that it is about her recently-deceased husband of nearly 30 years. Some of her usual lightheartedness has returned for The Young Girls Turn 25, but it is still a somber, nostalgia-tinged effort. It is a film about looking backwards and celebrating a more joyous time, rather than it is a film about vivifying the present and enjoying what is happening in the moment, which is her usual MO. Much of Varda’s filmography renders the banal and the quotidian into the spectacular and the particular, but in the films of the early ‘90s, coming on the heels of Jacque Demy’s death, that spirit is gone. She is looking to the past for her kicks. The viewer cannot but help but grieve with her.

This is not to suggest that The Young Girls Turn 25 is a mournful film. There is an undeniable pall hanging over it; and not just because of Demy’s demise, but also considering that one of the two eponymous young girls, French starlet Françoise Dorléac, died just months after finishing The Young Girls of Rochefort in a fiery car crash. Even with the darkness of all that death, The Young Girls Turn 25 is a bright, colorful and ebullient film about the magic of movies to transform reality into some parallel realm of charismatic costumed folks who sing and dance randomly on the streets. Who can blame Varda for pretending, in 1991 only months after her husband’s death, that she could return to the wondrous summer of 1966 using that same movie magic?