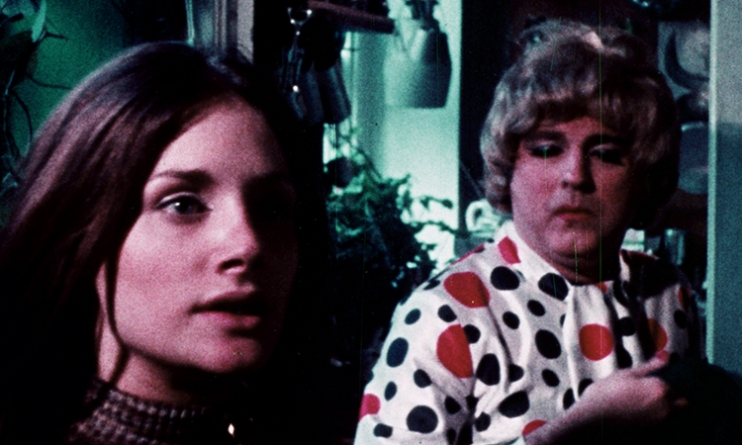 Fleshpot opens with camera footage of the Deuce taken from a moving car; the POV of a hustler looking for a mark or a score. The camera finds Dusty (Laura Cannon, credited as Diane Lewis) checking in with the guy she’s living with—an arrangement apparently made for bread. She’s pretty, he isn’t, and he lets her stay in exchange for sex. Dusty puts up with it, to a point, because she can pilfer his belongings and take them down to an antique store, where the owner won’t say anything about stolen goods, especially if the customer is willing to offer something extra. But she’s had it, and strikes out for an uncertain next step.

Yes, Dusty is a hooker, and she’s far from happy. The only people she can trust—but can she really? – are drag queens like Cherry Lane (Milligan regular Neil Flanagan), who lets Dusty stay with her to sort things out. Dusty hangs out with Cherry and her boisterous friends at a downtown bar, where they talk about their trade and perform renditions of “The Good Ship Lollipop.” Which all sounds like good, campy fun. The seedy milieu is an appropriate place for a song associated with childhood; much like in Milligan’s masterpiece Seeds, Fleshpot depicts a group of people who have become corrupted but still retain some of their childlike naiveté, however distorted.

Things seem to be looking up when a handsome, mysterious and straight stranger shows up at the bar. Bob (credited to Bob Walters) is a Wall Street banker, and it doesn’t take long for Dusty to convince him to take her home. He’s her ticket out of this lifestyle, and she doesn’t think of him as a trick; but, since this is a Milligan joint, things won’t end well.

While Milligan titles like The Body Beneath and The Torture Dungeon ply their raw aesthetic in typical horror movie settings (albeit frequently shot in and around Milligan’s Staten Island home), this time the carnage takes place among the desperate denizens of the New York sex trade, giving Fleshpot the feel of a sordid documentary. When the hopeful couple take part in one of the director’s signature leitmotifs—sharing a bath together—it’s like a purification ritual. Dusty really is going to get out of the business and lead a conventional middle-class life. Of course, that’s when Milligan pulls the rug out from under her.