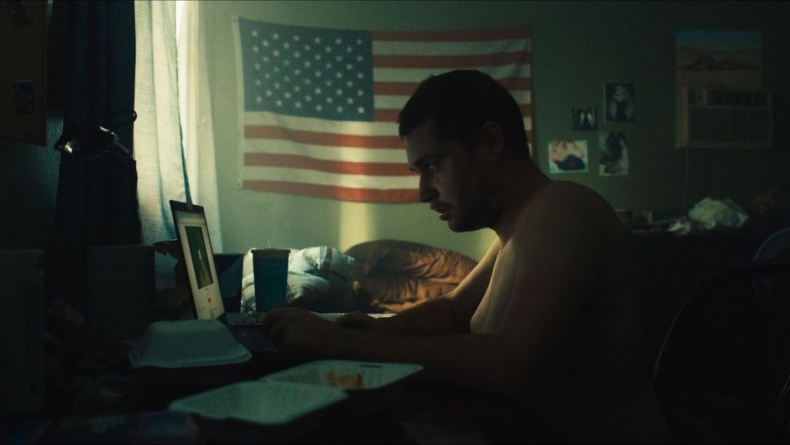 Cuck is a far more engaging and daring film than it has any right to be.

With all the discourse surrounding the Joker movie and its relationship to incel culture and the prevalence of white rage in modern American culture, media critics seem to be willfully ignoring how little that film actually engages those issues with anything resembling specificity. By contrast, Rob Lambert’s appropriately titled thriller Cuck tackles all of that thorniness head on, resulting in a blunt instrument of a film that disappoints with its obviousness, but still has some surprises up its sleeve.

He wants to join the Army, but a prior misdemeanor charge and woeful psych eval results leave him no choice but to take a job as a janitor working for the kind of brown-skinned immigrants his favorite vloggers tell him are ruining his country. Every single element of Ronnie’s predicament is so on-the-nose that it borders on comedy, with scenes meant to feel tortured and harrowing evoking cackles from the viewer.

The straightforward version of Ronnie’s story is the radicalization of a lonely young man. In a lesser film, Cuck’s comically sincere first act would roll right into its tragic third, painting a simple picture of an unwell youth needled into mass violence. While its introductory chapters and the eventual carnage of its climax truck along with exactly the beats a viewer might expect from a low budget flick punching above its thematic weight class, the film’s curious middle is a pleasant surprise.

Lambert and co-writer Joe Varkle hit all the usual right-wing talking points with a ball-peen hammer going in, but it’s in their experimental exploration of Ronnie’s psychosexual turmoil that Cuck finds its sweet spot. Through his various depressive excursions, Ronnie becomes enamored with Candy (Monique Parent), a blonde cougar who lives up the street. His blatant attraction to her is placed in direct contrast to the skeevy undercurrent of his relationship with his own mother. But once Candy and her terrifying husband Bill (Timothy V. Murphy) rope him into a supporting role in the pornographic content they create online, the multiple layers of Ronnie’s issues are removed from the repetitive drama of his day to day interactions with minorities.

Instead, the viewer gets to look at his flaws and insecurities laid bare in a number of intimate, haunting and captivating sequences, sidelining the tired extremist rants for an altogether sadder and more fascinating portrait of the intersection between sex and politics. Obviously, this diversion has to circle back around to the film’s original thesis and complete precisely the way one might expect. But for a little while there, Cuck is a far more engaging and daring film than it has any right to be.