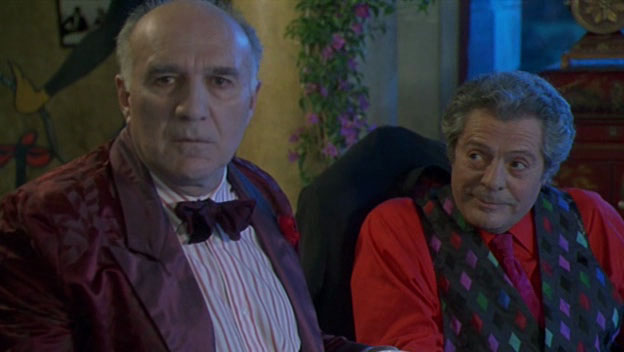 The spiraling mania of creative passion that fuels Varda’s film is a testament to her ability to reflect and build upon the reflexive puckishness of the New Wave long after its other practitioners soured on their early style.

demonstration than One Hundred and One Nights. Set mostly in the palatial chateau of Simon Cinema (Michel Piccoli) a centenarian cinephile whose life has spanned the entire history of film, the film uses in-camera tricks, complex blocking and endless cinematic allusions to create a liminal space between reality, memory and fandom, a living museum paying homage to a history that Varda herself had been contributing to for nearly half its length.

As Simon says, “I have memories, but I can’t remember them,” so he hires a young film student, Camille (Julie Gayet), to talk movies with him as he enters his twilight. Simon may be fading, but he still has a youthful sense of humor, as evidenced by his putting on silent-film pancake makeup to greet Camille with a ghostly visage that sends her sprinting. Camille soon warms to him, though, affectionately calling him Nosferatu and playing along with all of his antics. In one scene, for example, Simon pretends to be Orson Welles, slurring between acting as the filmmaker, Charles Foster Kane and Kane’s inspiration, William Randolph Hearst. All the while, Camille herself slides between roles as herself and both Kane’s and Hearst’s mistresses, correcting Simon on his trivial details when he gets them wrong before dipping back into performance.

This playfulness is matched by Varda’s direction, which shows off a musicality worthy of her late partner, Jacques Demy. Varda’s fiction films tend to make the most of judicious movement and subtle composition, but here the camera is almost always in motion, circling around Simon’s mansion and its cluttered trinkets that place paintings next to life-size cutouts of Hollywood stars amid various bric-a-brac of film history. The editing has a punchy, rhythmic quality that creates a collage of memory and film references, often inserting clips from movies ranging from King Kong to Mauvais Sang. The film frequently dives into Simon’s unreliable perspective, prompting visits from spirits ranging from movie characters to Death (Romane Bohringer) itself, who arrives in a wreath of smoke and departs with an in-camera edit that simply removes her from the frame.

Further complicating Simon’s reveries are the routine visits by various titans of film who come to him as if paying respects to cinema itself. Marcello Mastroianni, Catherine Deneuve, Clint Eastwood, Robert De Niro and more all float through the picture as some version of themselves, mostly to reminisce with Simon and occasionally to act out his imagination. At times, Piccoli drops the act and talks as himself, referencing his own movies and speaking to the other actors as colleagues. The most amusing example of such behavior involves a visit from Gerard Depardieu, who commiserates with Piccoli over the many ways that both have died in movies, with Depardieu cheerfully mentioning that he’s been “shot” eight times before the two laugh over their most melodramatic death scenes.

As Simon holds forth with friends real and imagined, Camille’s own pals, film students themselves, resolve to exploit her connection to the rich, senile man to fund their projects. Yet as they get closer to Simon, they too are caught up in his winsome personality and the invigorating properties of his cinephilia, and soon the youths pivot to including him in their own film, even further complicating the larger film’s porous boundaries of reality. The students’ cynicism, seen elsewhere in their sardonic private conversations, gradually folds in the face of Simon’s infectious energy, and soon the kids are shooting anything that comes to mind, rewriting ideas on-set and losing their starstruck behavior around other actor icons to press them into service for an extended class project that tosses out the need for plot for the joy of spontaneous creation.

The spiraling mania of creative passion that fuels Varda’s film is a testament to her ability to reflect and build upon the reflexive puckishness of the New Wave long after its other practitioners soured on their early style. But nothing about this film feels like a repetition or stasis in glory days. The wry use of Simon’s lapsing mental faculties to break the fourth wall as Piccoli undercuts any maudlin sentiment in the film, instead delighting in the dense tapestry of allusions and quotations that is further broadened by acknowledging the falsity of the film. In many ways, One Hundred and One Nights feels like the cinematic equivalent of A Midsummer Night’s Dream, a work that exists wholly as a patchwork of wordplay and in-jokes, with a narrative in place only to give some shape to things. It’s a celebration of language, in this case visual as much as textual, a love letter to cinema that expresses in purest forms all the delight the art form has to offer.